In my opinion, Lady Macbeth is portrayed by Shakespeare as an evil character, as she shows great ambition, she values power and wealth over human life, and she demonstrates cruelty throughout the play. Firstly, Lady Macbeth’s evil character is demonstrated by the reckless ambition she shows. ‘That no compunctious visitings of nature shake my fell purpose, nor keep peace between the effect and it!’ she states. This shows that Lady Macbeth is willing to do anything to accomplish her evil ambitions, even if it means that she has to ignore human compassion which includes her gender, as she wishes the spirits to “unsex her”, to make her less like a women and more like a man.

Don't use plagiarized sources.
Get Your Custom Essay on ﻿Lady Macbeth is evil Just from $13,9/Page

In that period of time, women were below men in society. Being able to have such thoughts as a woman under those circumstances at that time proves that Lady Macbeth is evil and her mind is filled with the lust for high ambition. Therefore, Lady Macbeth’s evilness drives out Macbeth’s ambition to become king and murder Duncan.

Additionally, the way that Lady Macbeth values power over human life also shows her evil personality, when she says, ‘Have plucked my nipple from his boneless gums and dashed the brains out’.

This tells us that she would rather kill her own newborn baby by bashing his brains out, than break her own promise. Women were meant to show a soft, feminine nature in society at that time, however uses such vivid imageries, showing how hungry she is for power, and how cruel and evil she is as a female human being. This quote also tells Macbeth that he is weak and less of a man if he is unable to follow through with their plan, when she would be willing to kill her own blood, which shows the sheer force of her character that leads to Macbeth follow what she says. Furthermore, Lady Macbeth’s evilness is also demonstrated by her inhumanity, as she says, ’Why did you bring these daggers from the place? They must lie there. Go carry them and smear the sleepy grooms with blood.’ This shows that Lady Macbeth is only afraid of getting caught, but not guilty about what she has done, in addition she wants to make it seem even worse by smearing the grooms with blood and passing the blame to innocent people. In this quote Lady Macbeth is scolding her husband for showing humanity and feeling frightened after performing a murder, which is a feeling that all normal people would have, as she finds this a cowardly behaviour, and this shows her cold-hearted and evil nature. In conclusion, Lady Macbeth personality is expressed through her large ambition, the way that she desires power, and her cold-bloodedness. Therefore, one thinks that Lady Macbeth is evil.

﻿Lady Macbeth is evil. (2016, May 15). Retrieved from https://studymoose.com/lady-macbeth-is-evil-essay 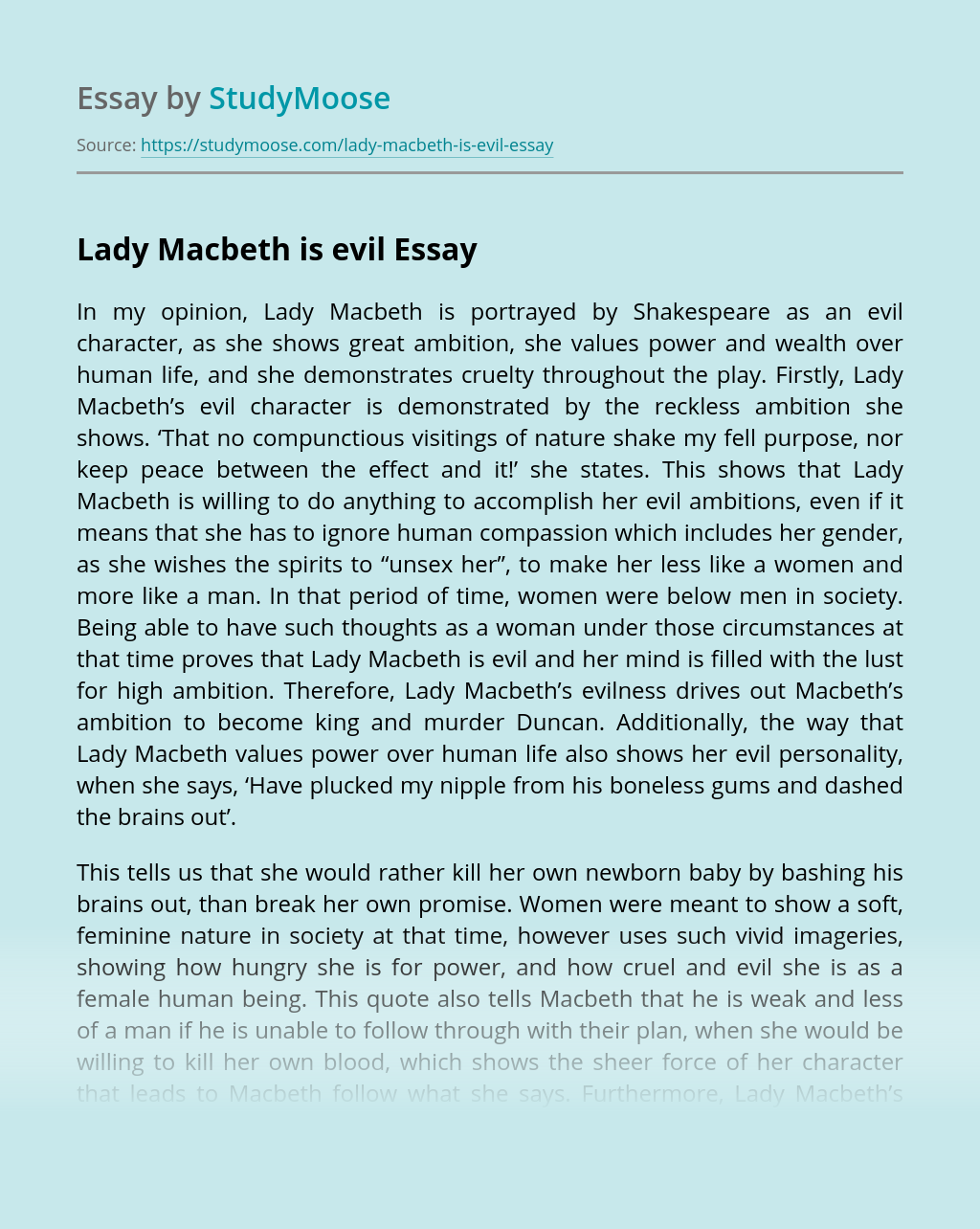 Feminist views in the Canterbury Tales

The book The Canterbury Tales by Geoffrey Chaucer holds a collection of stories based in medieval times of a number of people undergoing a journey. Along the method each character stops to inform a story that teaches an ethical. These stories all have their own protagonists that share the writer’s beliefs and each tale is...

﻿Women in "Merchant of Venice"

In Shakespeare’s The Merchant of Venice, there are many controversies over religion and friendship, but the idea of the play that interested me the most was the role of women. The two women that are in this play take on the role of the saviors of the men who seem helpless and hopeless compared to...

Get Essay
Gender Based Discrimination in the Novel Things Fall Apart

In regions especially where poverty and ignorance are widespread, people are generally be in dispair. Living in such hard conditions and being unable to get rid of the situation, the man is tend to unload his suppressed resentment by using brute force on his houshold. The man who is not satisfied with his achievments and...

Most parents expect many things from their children but most importantly wish their children to be successful and happy, but parents hold different expectations based on their child’s gender. The expectations that both mothers have are common because both of them have daughters. These differences in expectations of gender can be seen in literature such...

The concept of equality is regarded as an inalienable human right that should be enjoyed by all individuals regardless of their gender, race, religion, and other differential factors (United Nations, 2009). However, it is clearly seen that this is not practiced in the society that exists today. Discrimination still persists and this is greatly exemplified...