Shakespeare’s bloody and tragic play Macbeth, written in the seventeenth century, portrays blind ambition, appearances can be deceiving and corruption of power. It follows the reasons behind Macbeth’s downfall. The play analyzes how other outside forces can easily change the path of ones desires and decisions. The witches’ intrusion, Lady Macbeth’s manipulation and Macbeth’s dark desires all interfere and manipulate Macbeth’s decisions. He goes from being praised as a noble soldier to a traitor and corrupt king.

Don't use plagiarized sources. Get your custom essay on
“ Corruption of Power – Macbeth ”
Get custom paper
NEW! smart matching with writer

In the play, Macbeth commits many terrible crimes; however he is solely not responsible for all of them.

The outside factors manipulate his decisions and are responsible for his downfall at the end. To begin, the witches’ manipulate Macbeth early in the play by strongly influencing his decisions. The witches scheme to tell Macbeth his fate after a battle has is lost and won. While traveling to King Duncan’s castle Macbeth and Banquo stumble upon the three witches.

The greetings are prophecies that plant a negative seed of blind ambition in Macbeth’s thoughts and the predictions are an approach on the witches’ behalf to establish trust. Soon after the witches’ disappear, two Scottish Nobles – Angus and Ross – inform Macbeth of his new title as the Thane of Cawdor in addition to his current title as Thane of Glamis.

The news makes Macbeth hopeful and invokes blind ambition, that he may become king. The prediction may come true easily as the Thane of Cawdor title did without causing harm to anyone.

Once Macbeth actually becomes King, the pressure and guilt of his actions start to build. He starts to worry and is insecure about his throne because the witches also predict that Banquo’s descendants will become king. He decides to persuade two murders to commit the monstrous crime of murdering his good friend. Macbeth intends to murder Banquo and his son Fleance, because they pose a great threat to his crown. After Macbeth is successful in persuading the two murders he orders the two murders, “to leave no rubs nor botches in the work/ Fleance, his son, that keeps him company,/ Whose absence is no less material to me” (3. . 153-155). Macbeth shows fear toward the prediction the witches foretold Banquo and this pushes him to murder once again. Moreover, the prediction was not meant directly at Banquo but for his descendants to rule Scotland as future kings. Macbeth does not want this because he desires his own descendents to become future kings. Banquo, and his son Fleance are a mere obstacle that need removing and Macbeth shows no concern or remorse in his decision to murder his dear companion Banquo and his son.

Later, Macbeth receives news about Banquo’s death and Fleance’s escape is relief however, it is short lived when Macbeth starts to see the ghost of Banquo. Macbeth is horrified and scared which leads him to the decision of visiting the three witches for answers. Macbeth is feeling insecure and fears Fleance returning and taking the throne away from him. There in a cave, the witches call upon their masters, the three apparitions to answer Macbeth’s request for information. The first apparition, an armed head, informs Macbeth to beware of Macduff.

The second apparition, a bloody child, advises Macbeth to be secure and not worry, because any man born from a woman can not hurt Macbeth. Macbeth laughs at this apparition’s prediction because every man is born from a woman and the second apparition’s prediction gives him more confidence and arrogance. Last of all, the final apparition, a crowned child with a tree in its hand, tells Macbeth to be proud and not fearful because he cannot be vanquished “until/ Great Birnam Wood to high Dunsinane Hill/ Shall come against him” (4. i. 106-107).

Macbeth is delighted to hear this prediction from the third apparition because he knows trees can not move and this information gives Macbeth the confidence he was seeking for in order to feel secure about his position and his throne can not be taken away. He feels as if no one can harm him. Although the apparitions are correct, the witches have twisted the truth for Macbeth to feel invincible and confident on the decisions he is making to cause him harm in the near future. Secondly, Lady Macbeth’s blind ambition and false appearance take part in further altering Macbeth’s decisions.

Lady Macbeth reads Macbeth’s letter and she immediately starts to plot King Duncan’s murder so the witches’ prophecies can her husbands desires can become true. She knows Macbeth is, “too full o’ th’ milk of human kindness/… That wouldst thou holily; wouldst not play false/ And yet wouldst wrongly win” (1. V. 17-23). Lady is aware her husband Macbeth is too noble and innocent to hurt an individual for his own personal gain. She knows she will have to persuade Macbeth to murder Duncan in order for him to become king.

Later, during the congratulatory dinner, Lady Macbeth convinces a hesitant Macbeth to execute Duncan. At first, Macbeth is hesitant because he thinks he is double crossing trust with the king, he is his kinsman, and tonight Duncan is his guest. Moreover, Duncan has done no wrong to deserve death. Macbeth confesses to Lady Macbeth he can not murder Duncan however, Lady Macbeth says, “Art thou afeard/…Wouldst thou have that/ Which thou esteem’st the ornament of life/And live a coward in thine own esteem” (1. vii. 43-47). Lady Macbeth is challenging his manhood by calling him a coward.

She is manipulating Macbeth by playing with his insecurities and leaving him confused and in a vulnerable state. Lady Macbeth takes advantage of the moment and convinces Macbeth to murder Duncan to prove he is a man and worthy of his manhood. As the dinner goes on, Lady Macbeth keeps up a perfect facade of an innocent, gentle host dressed in white gown. However, she is deceiving everybody because as the guards drink and party the night away she laces their drinks to knock them. Therefore, later the blame of Duncan’s murder can be put on their heads. After midnight, Macbeth murders Duncan and he is mortified and paranoid.

Macbeth is disgusted at himself however, Lady Macbeth convinces him “My hands are of your color, but I shame/ To wear a heart so white/… A little water clears us of this deed” (2. ii. 83-87). She manipulates Macbeth in thinking the murder of Duncan is just a step to complete his desires. She completes the murder and helps Macbeth wash his hands as well as hers. She reassures him they will not be caught because she cleverly drugged and put the bloody draggers in the guard’s hands. In addition, explains their cover story as being asleep while this dreadful deed took place.

Moreover, Lady Macbeth uses her blind ambition and false appearance to manipulate Macbeth’s decisions and deceive the individuals around them to achieve Macbeth’s desires and complete the witches’ prophecies. Thirdly, Macbeth’s dark desires start to transform Macbeth from a noble soldier to a tyrant and a corrupt king as a result, of the manipulation from the witches’ and blind ambition from his wife – Lady Macbeth. At the beginning of the play Macbeth is praised for successfully vanquishing the enemy and his army alongside his loyal companion and solider, Banquo.

After the battle, King Duncan praises Macbeth as, “O valiant cousin, worthy gentleman” (1. ii. 26). The praise gives Macbeth great respect and honour because ‘cousin’ is referred to an individual who is highly trusted and respected. Macbeth is praised because of his respectful deeds of protecting the king and eliminating the enemy threat. The good words Duncan says to Macbeth honour him in a positive way. However, soon after the witches tell Macbeth the prophecies; the second prophecy becomes true and he is awarded the tile of Thane of Cawdor.

Macbeth travels to King Duncan’s castle to let him know of his appreciation towards the kind gesture. However, at the castle Macbeth’s desires start to change. Duncan announces his eldest son, Malcolm, will be the heir to the throne after his passing away. Macbeth says in an aside, “Stars, hide your fires; / Let not light see black and deep desires” (1. iv. 57-58). The seed that the witches’ are responsible for planting inside of Macbeth’s noble thoughts earlier starts to evolve into less noble thoughts of becoming king. Now Macbeth is starting to feel jealous towards Malcolm.

He tries to convince himself that such negative thoughts are not good and should not remain in his mind any further. Moreover, Macbeth is scared and hopes no one is aware of his negative thoughts towards Malcolm. Moreover, Macbeth now carries the burdens of two murders; of King Duncan, and his good friend Banquo. However, he starts to feels insecure once again due to the apparition’s prediction of being aware of Macduff. Macbeth states, “From this moment/ The very firstlings of my heart shall be/ The firstlings of my hand” (4. . 166-168), and orders in a rushed decision to execute every living soul in Macduff’s castle so he can sleep better at night. The irrational order to slaughter innocent people in Macduff’s castle proves how Macbeth is abusing his power of king. Macbeth is punishing Macduff’s innocent family for Macduff’s treason. However, Macduff’s family is not even aware of Macduff’s decisions and treason. Macbeth says he does not care what he does or how it will affect the others around him as long as it will help him sleep better at night.

This proves Macbeth is no longer noble but a tyrant and corrupt king. Furthermore, the changes Macbeth undergoes, from a noble solider to a tyrant and corrupt king occur due to his dark desires; his decisions were affected by the witches’ manipulation and by his wife, Lady Macbeth’s blind ambition. To conclude, Macbeth is not responsible for all his terrible crimes he commits throughout the play. The witches’ manipulation, his wife – Lady Macbeth’s blind ambition and Macbeth’s desires hinder with noble Macbeth’s decisions and cause him to become Tyrant and Black Macbeth.

At the beginning of the play he is the great and noble solider praised by King Duncan, but later transforms to a psychotic and corrupt king. He killed innocent people to get to his position as king and to further secure it. Furthermore, Shakespeare portrays in his play Macbeth, blind ambition, appearances can be deceiving and corruption of power and how they can be outside forces contributing to one’s downfall. In Macbeth’s case, outside forces influence his decisions and ultimately lead to his destruction. 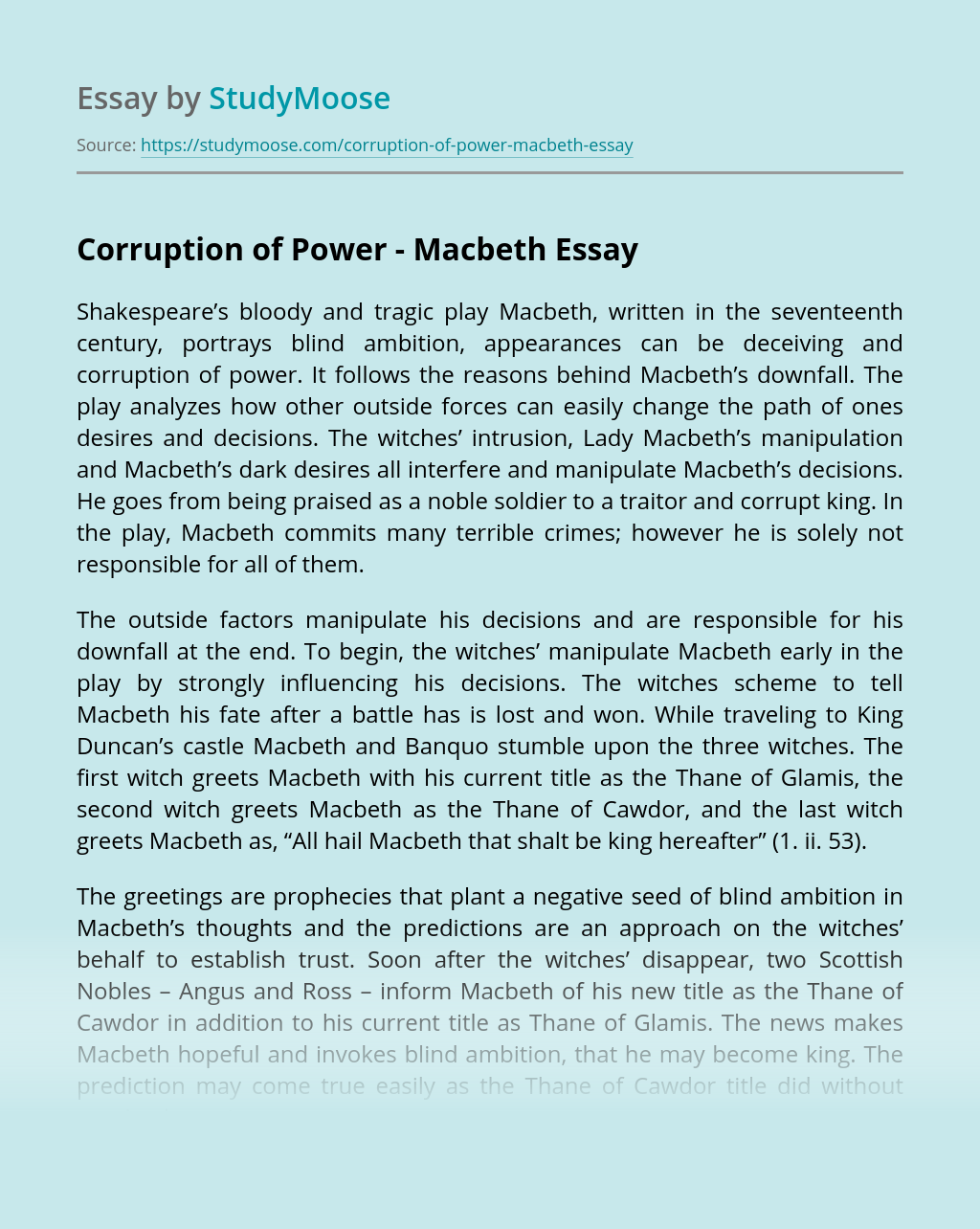