Distortions Through Deception In Macbeth

In William Shakespeare’s play Macbeth, Macbeth, Lady Macbeth and the three witches destroy lives by their acts of deceit to create corruption, violence and an upset in the balance of good and evil. To be deceived implies a deliberate misrepresentation of facts through the words or actions, which is used by one to increase power. While caught in a viscous, power hungry cycle, it is hard to distinguish between what is ethical and moral as reality becomes distorted. It is this distortion and the negative repercussions that cause devastation, which has resulted from deceptions.

Don't use plagiarized sources. Get your custom essay on
“ Distortions Through Deception In Macbeth ”
Get custom paper
NEW! smart matching with writer

These deceptions have ruined the lives of many, who were to caught up in a struggle for power and unable to realize their own shattered lives.

Firstly, acts of deception, which created corruption, violence and a disturbance in good and evil, are illustrated through the life, which Macbeth led. The witches, through their prophecies, deceived Macbeth. These prophecies lead Macbeth to corruption, and through distortion of reality, felt murder was the only way to gain power.

Macbeth murdered Duncan, in order to satisfy this hungry urge for control. Yet, instead of feeling remorse and repenting, he began to plan the murders of others, in order to protect his own guilt. Before Macbeth met the witches, he knew how morally wrong murder was.

Through his own distorted perception and corruption, murder became a necessity for survival. Soon others saw Macbeth’s corrupt nature, and thus the rebellion against Macbeth resulted from his hastily built empire. Macbeth used violent actions for what he what he could not be achieve with integrity.

Since Macbeth could not stay king without doing a dishonest act, he had Banquo violently slain by someone else, “Safe in a ditch he bides, /With twenty trenched gashes on his head, /The least a death to nature.” (Shakespeare 3.4.26-28).

Although, Macbeth did not carry out these actions, it was his bloody directions that were followed. Violence is another example of how power hungry Macbeth was, by using violence; he had no ethics or morals and could not be admired. Macbeth used violent actions to gain his power, violent actions to stay in power, and regrettably, violent actions were what severed him form his power. Macbeth used violence to destroy the lives of others, and violence ultimately destroyed his. Macbeth was once a person who appeared to have a good grasp on good and evil and was able to distinguish between them. However, Macbeth was quickly confused when he first had the taste of power, once he had tasted the sweet victory, he would do anything not to lose his grasp.

It was then, that the aspect of good and evil was forever altered in Macbeth’s eyes, good was quickly associated with power and strength and evil with limitations and vulnerability. Of course, Macbeth wanted to be powerful, he associated everything with it, respect, admiration and recognition. Unfortunately for Macbeth, no matter how powerful he became, he craved more. The only way he felt he could gain power was to kill, and killing is in truth evilness on it’s own. Consequently, Macbeth mistook good for evil and this added to his untimely downfall in the public eye. Macbeth’s hunger for an insatiable power was the act of deception used in order to promote his corruption, violence and disturbances in his morals.

Secondly, Lady Macbeth used acts of deception in a more devious manner. She toyed with others emotions, not caring about the consequences as long as she ended up on top. She demonstrated deception through corruption, violence and the balance of good and evil. Thus, Lady Macbeth was along side her husband, also quite power hungry. She craved it, and would do and use any means possible to get it, manipulation, deceit, and even murder. Although lady Macbeth never physically killed anyone, she did play a large part in the murder of Duncan. Lady Macbeth is solely to blame for being corrupted. She did it all to herself. She began herself corruption by pleading to the spirits, “Come you spirits/That tend on mortal thoughts! unsex me here, / And fill me from the crown to the toe top-full/ Of direst cruelty; make my blood thick/ Stop up the access and passage to remorse, / That no compunctious visitings of nature”¦And pall thee in the dunnest smoke of hell” (Shakespeare, 1.6.39-50).

By having herself corrupted, she was able to corrupt her husband. She fed his innocent mind full of unkindly thoughts of murder, she convinced him that he will not be suspected, “Who dares receive it other, / As we shall make our grief’s and clamour roar/Upon his death?” (Shakespeare 1.7.77-78) As a result, this begins the corruption of her spouse. By having her husband believe that power brings happiness, he does exactly as she says. Violence, defined as a powerful force or energy, is the second force Lady Macbeth uses to unknowingly destroy her husbands life and her own. She uses such power in the sense of how perfectly her plan to murder Duncan was carried out with precision. All of the strength she possessed was in the execution of this plan. She was drained emotionally of all her strengths, this let to the quick demise of her mentality.

Lady Macbeth never really appeared to have a good grasp on the difference between good and evil. Neither mattered until she received what she wanted. She was spoiled by the evil of her ambitions for her husband to become king. Lady Macbeth wanted nothing more than the power her husband could control and used evil acts to get it. However, once she had the power, the imbalance of good and evil had been tampered with too much and her actions could not be reversed. Since lady Macbeth did not understand the difference between good and evil, her soul was never set free, her suicide is proof of this. Lady Macbeth became lost in her own guilty conscience, something she thought she had long since disposed of.

Thirdly, the witches were perhaps the most deceitful characters presented in Macbeth. They used their powers for their own twisted pleasure and easily toyed with certain characters innocence. Initially and by far the largest character in which they corrupted was Macbeth. He was an easy target for the witches; he secretly dreamed of power and only attempted to be modest around others. The witches noticed this and fooled around with his boyish self-esteem.

The three told him great prophecies of the future that Macbeth could only dream about. The three knew Macbeth was coming “A drum! A drum! /Macbeth doth come.” (Shakespeare 1.3.30-31) Secondly, the witches use violent actions to their advantage. They torture humans in their sleep, haunting them, “Sleep shall neither night nor day/ Hang upon his pent-house lid; / He shall live a man forbid. /Weary sev’n nights nine times nine,” (Shakespeare 1.3.19-22).

The witches torture the innocent in their sleep. They tortured a sailor, and they quite possibly could have tortured Lady Macbeth as she slept, although she was not innocent. This could be the ultimate cause for her sleepwalking. Finally, the witches used good intentions on innocent people and use evil prophecies of the future to make others power hungry and desire the evil nature. After one visit from the witches, Macbeth had to know more, he yearned for more information, which was the witches’ objective all along. When Macbeth came back to visit them, they gave him miniscule pieces of information that lead him to believe he had nothing to worry about. While in fact had a great deal to worry about. The witches’ prophecies made him feel invulnerable and were what killed him in the end. The witches had perhaps the largest part in Macbeth, it was their evil prophecies of power that destroyed a vast variety of lives who unfortunately got involved.

As clearly illustrated in the lives of Macbeth, Lady Macbeth and the three witches, deception and the consequences are undoubtedly portrayed as having detrimental effects in their lives. The corruption, violent tendencies and unethical choices are a few of the consequences of the deception, which was created, to devastate. In conclusion, Shakespeare’s play Macbeth, is an excellent portrait of today’s society, as it depicts effects of the insatiable, unrealistic and deceived society, which corrupts, hurts and promotes decisions that leads to the untimely waste of many lives.

Distortions Through Deception In Macbeth. (2016, Jul 15). Retrieved from http://studymoose.com/distortions-through-deception-in-macbeth-essay 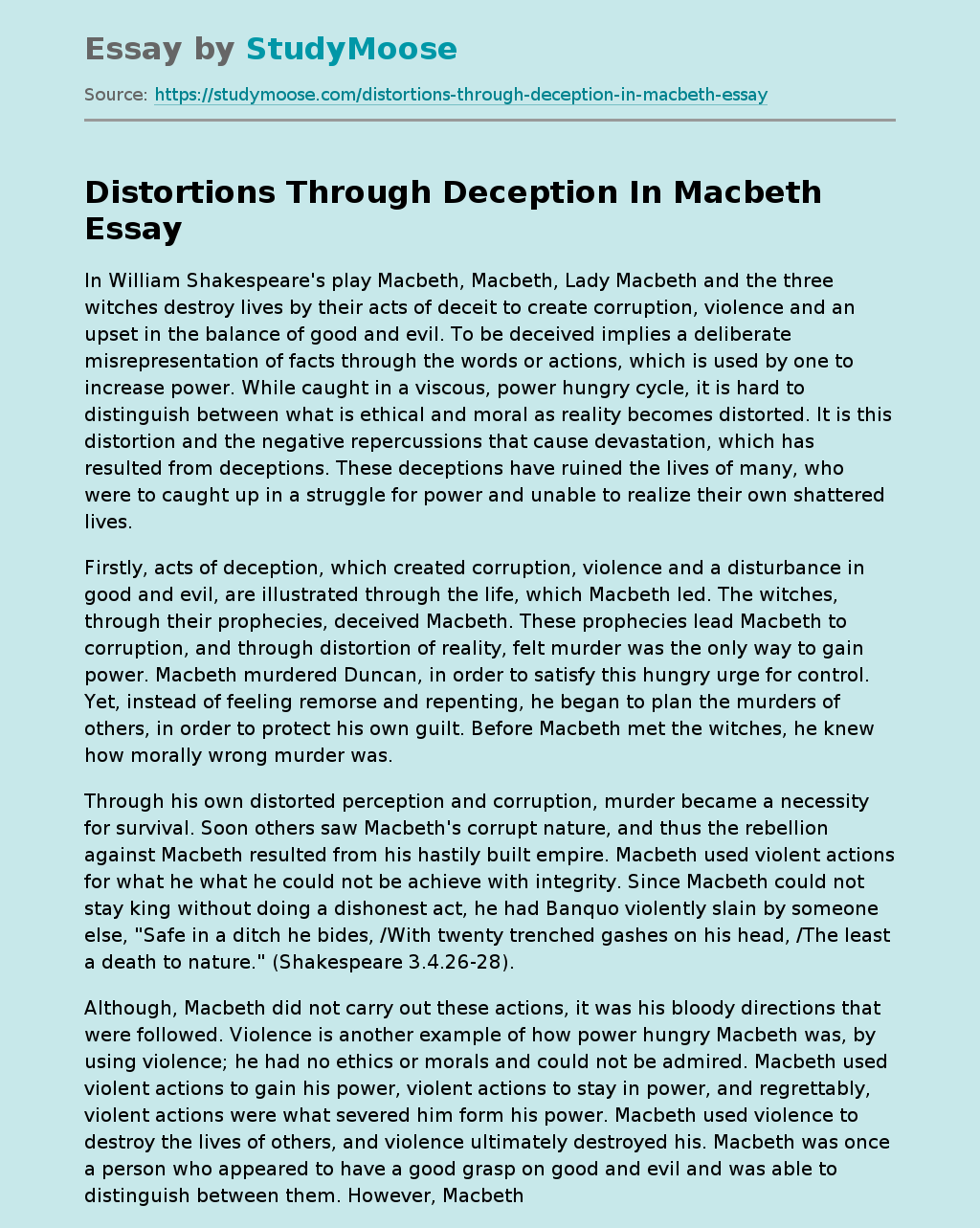