Honesty in the Crucible

The phrase “honesty is the best policy,” applies to Arthur Miller’s history-based drama, The Crucible, in a variety of ways. The accusations throughout the story build on lie after lie after lie from those trying to protect their own name, thus putting the whole town in a state of confusion and chaos. Nobody in the small town of Salem, Massachusetts knows whom to trust anymore, after all of the false allegations made. There are three characters in particular in the story that, if they had told the truth from the commencement, the town would have been in a state of peace rather than mayhem.

Don't use plagiarized sources. Get your custom essay on
“ Honesty in the Crucible ”
Get custom paper
NEW! smart matching with writer

If Abigail Williams, John Proctor, and Elizabeth Proctor had been honest, many innocent lives could have been spared and Salem would not be in such disarray.

Abigail Williams lies many times throughout The Crucible. In Act I, Abigail deceives Reverend Parris by claiming that the reason she was dismissed from working for the Proctors was due to the fact that “She [Elizabeth Proctor] hates me, uncle, he must, for I would not be her slave” (Miller 12).

The reality of this statement is that although Abigail claims, “there be no blush upon my name” (Miller 12), Abigail was discharged from her laboring duties because she had a love affair with John Proctor. Abigail continues with this deception throughout the entire story, which later leads to the downfall of many others. Another example of Abigail’s dishonesty is while dancing in the forest one night with other girls, Abigail tried to cast a charm to kill Elizabeth Proctor so she could have John all to herself.

When the villagers of Salem received word of this, Abigail quickly denies the accusations of witchcraft by diverting the attention to others by lying and claiming to have seen many people with the devil while in the forest. Another lie Abigail concocts in The Crucible is that Elizabeth Proctor sent her spirit on Abigail and claims “a needle were found stuck into her belly” (Miller 76), when in fact, Abby stuck herself just to make it appear that Elizabeth committed the heinous act. If Abigail had not continuously lied to protect her reputation, none of the suspicion of witchcraft would have occurred and innocent people would not have had to go through the burden of trials, prison, and the fear of sure death.

John Proctor also lies throughout The Crucible. Although he has come clean to his wife, Elizabeth, about his love affair with Abigail, it is still a secret to the rest of the citizens of Salem. John is severely ashamed of his act of adultery, and has trouble admitting it to himself. When Elizabeth suggests early on,”I think you must tell him[Hale], John” (Miller 67), Proctor evades admitting the truth to Reverend Hale of his affair even though it could have been a valid excuse for the Proctor family’s lack of attendance at church and John’s inability to say the commandment, “Thou shalt not commit adultery.” In Act III, when John finally is forced to admit his clandestine affair with Abigail to the court, nobody believes him. Because John has waited so long to confess his affair, it just looks like a poor attempt to save him and Elizabeth from the indictments. If John had divulged the secret of his affair earlier on, people might scorn him for his sin, but he would have evaded the allegations of witchcraft.

Although John Proctor and Abigail Williams are dishonest throughout the majority of The Crucible, Elizabeth Proctor remains truthful for most of the story. She does make one very grave mistake that sets the precedent for her husband’s future. When asked, “To your own knowledge, has John Proctor ever committed the crime of lechery?” (Miller 113), Elizabeth lies to the court in agony answering, ”No, sir.” (Miller 113). John, having already confessed the sin to the court, is believed a liar and sentenced to death by hanging. Although Elizabeth only lied to protect her husband’s good name, if she had been honest with the court, John’s life could have been spared.

If Abigail Williams, John Proctor, and Elizabeth Proctor had been honest, many innocent lives could have been spared and Salem would not be in such disarray. They lied for different reasons (Abigail out of greed, and John and Elizabeth to spare John’s reputation), but nevertheless, the lying lead to bedlam throughout the city, distrust, confusion, and more lies. Arthur Miller’s idea of the theme of honesty in The Crucible is that the truth is always meant to always be told, and no matter how painful the consequences, the penalties for lying will always be heavier.

Honesty in the Crucible. (2017, Feb 04). Retrieved from http://studymoose.com/honesty-in-the-crucible-essay 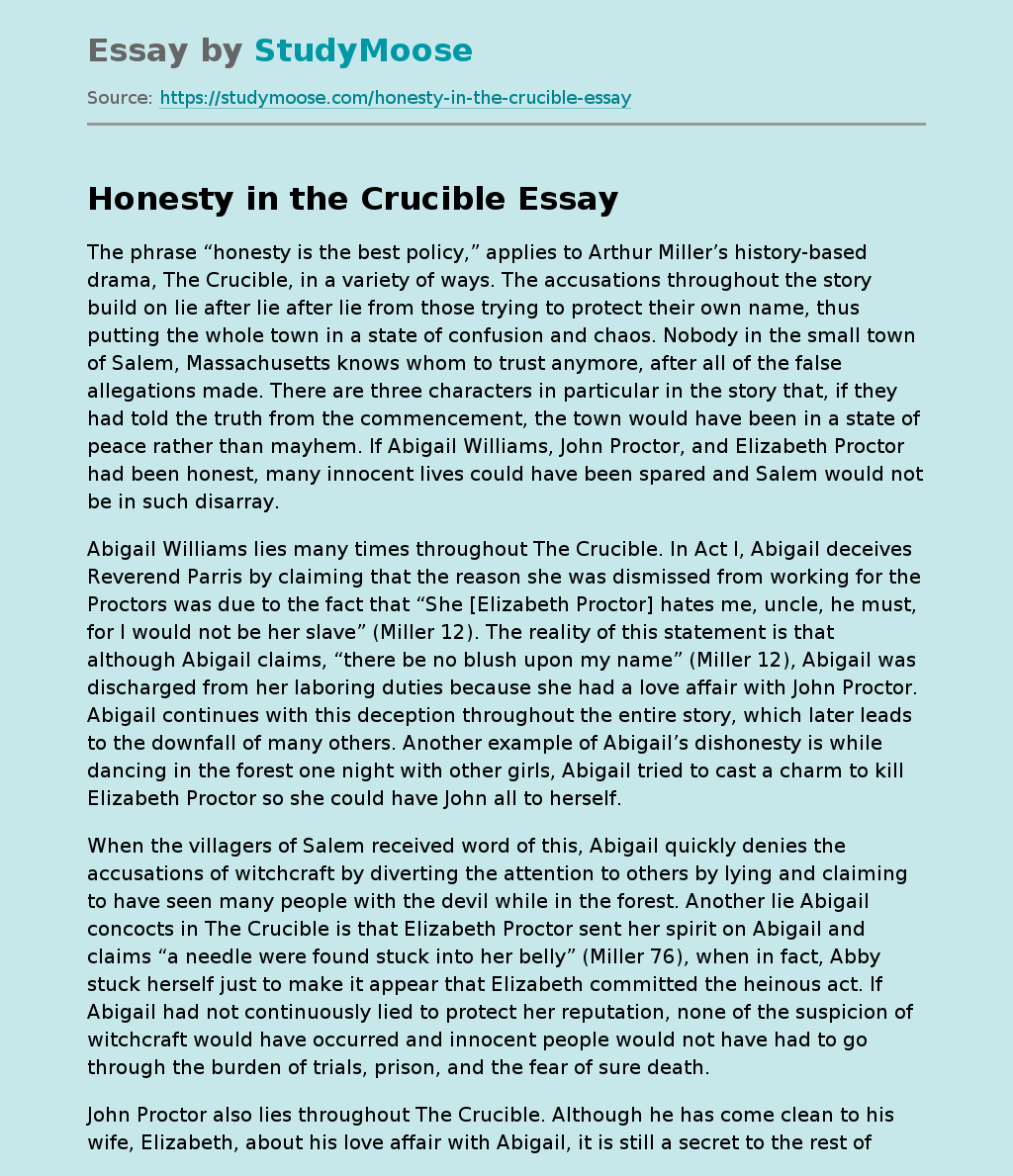