Deception and lies are what makes King Lear a tragedy. The play is a result, of the consequences triggered off by lies and falsehoods that were told in King Lea’s family, as well as in the family of the Earl of Gloucester. In this play, Shakespeare added a sub-plot to the main-plot and both are based on the same events, differing slightly according to the story.

The main-plot involves Lear and his three daughters whereas the sub-plot makes use of Gloucester and his two sons.

Don't use plagiarized sources. Get your custom essay on
“ The main plot and sub plot run parallel in King Lear ”
Get custom paper
NEW! smart matching with writer

King Lear gives his daughters a love-test, stupidly intending to measure love with flattery; “Which of you shall we say doth love us most…” (Act 1 Scene 1) Regan and Goneril are full of flattery and nice words and get rewarded, but Cordelia speaks truthfully, refraining from using fancy words; “I return those duties back as are right fit…” (Act 1 Scene 1) Lear fails to see his youngest daughter’s honesty and banishes her from his Kingdom, stripping her of every title she had.

Shakespeare introduces the theme of ‘sight and blindness’ with Lear’s inability to see Cordelia’s truthfulness and his blindness to the false-flattery of his other two evil daughters. Also introduced is the theme of ‘Nothing’ when Lear tells Cordelia; “How, nothing will come of nothing.” (Act 1 Scene 1).

The theme of ‘Sight and Blindness’ and ‘Nothing’ reappear throughout the play in many different contexts, but the irony lies in the fact that Lear depicts Shakespeare’s theme of sight an blindness by demonstrating that physical sight does not guarantee clear sight and he is left with ‘nothing’ and becomes ‘nothing’.

In the sub-plot, Edgar, like Cordelia who is banished, has to leave, though unlike Cordelia, he is given no chance to prove himself because his brother Edmund cleverly creates the plot against him leaving him no choice other than to flee. As King Lear is deceived by his own daughters, so is Gloucester deceived by his own son Edmund. Edmund, with the use of a falsely-written letter, pretends that Edgar is planning a ‘conspiracy’ against their father. “If our father would sleep till I waked him, you should enjoy half his revenue for ever and live…” (Act 1 Scene 2)

Edmund then ironically tells Edgar that someone has plotted against him and that he must leave; “Brother, I advise you to the best, go armed.” (Act 1 Scene 2). Edmund makes his father believe that Edgar strikes him and in this way proves his brother’s guilt; “Some blood drawn on me would beget opinion…” (Act 2 Scene 1)

The first part of the play starts off with Lear and Gloucester, both betrayed and deceived by their ambitious and greedy children. Both of them fooled by words and their forthcoming rashness leads them to turn away their most beloved children, Cordelia for Lear and Edgar for Gloucester.

As the play progresses, the plots begin to open up and expand, moving into evil directions. Both Lear and Gloucester are betrayed once again, Lear by the “…Pelican sister…” who plot against him and leave him homeless and send him away out into the storm leaving him with “nothing”. Whilst Gloucester confides vital knowledge to his son regarding his plan to rescue and help King Lear, Edmund uses this information against his father for his sick ulterior motives.

At this point we are left with Gloucester, who is blinded by order of Goneril and Regan because he is a “…filthy traitor…”, and Lear who has fallen victim to madness as we are informed by Kent; “His wits begin t’unsettle.” (Act 3 Scene 4). We also notice the recurring theme of sight and blindness in the sub-plot but in the case of Gloucester he depicts this theme by demonstrating clear vision, despite the total lack of physical sight. We learn Cordelia is on her way to release her father whilst Edgar, with the use of his positive deception as Poor Tom, is already protecting his father from further evil.

With regards to the two evil sisters, we learn that rivalry grows between them due to the fact that they are both in-love with Edmund. Edmund, ambitious as he is, thinks; “Which of them shall I take? Both? One? Or neither?” (Act 5 Scene 1) These three characters are responsible for the mechanisms which initiated the downfall of the old patriarchs; driven by rivalry, egoism and ill-natured ends.

The events that made up the main-plot are reflected in the process of the sub-plot. Lear and Gloucester both fall victim to the conspiracy of their children, who wanted to take all they had. Cordelia and Edgar were both banished even though ironically they were the two most truthful and honest of the lot. In Shakespeare’s play King Lear he main-plot and sub-plot are in perfect co-ordination of each other. 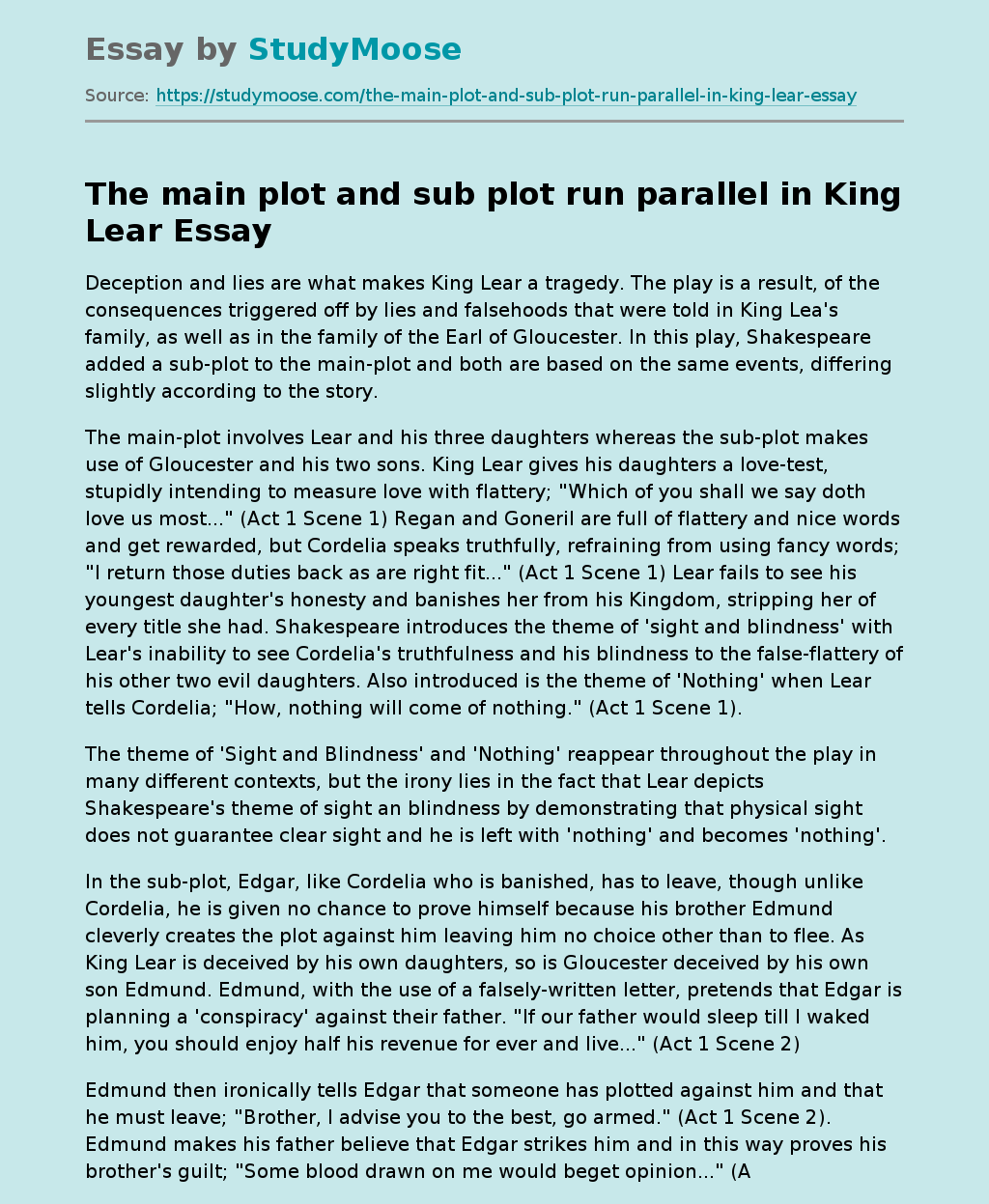