Macbeth as a Character vs the Real World

Appearance versus reality is an important theme in William Shakespeare’s ‘Macbeth’. The theme focuses on characters who are deceived by what appears to be real, and on the tragic consequences that follow this error in judgement. By evaluating the way the play shows that appearances are deceptive and the consequences of each pretence it is apparent that Shakespeare is conveying the message that all humans must make a decision whether to choose the world of appearance or real world concerns.

Don't use plagiarized sources. Get your custom essay on
“ Macbeth as a Character vs the Real World ”
Get custom paper
NEW! smart matching with writer

Throughout the play there are many examples of how appearances are deceptive and characters choose the world or appearance rather than of real world concerns. The audience is immediately introduced to the idea of appearance rather than reality through the supernatural witches. In act 1 scene 1 they say “Fair is foul, and foul is fair” this is an idea that contradicts itself, and is used to foreshadow the fact that characters in the play who seem to be good and righteous (Macbeth and Lady Macbeth) may actually be tainted or evil, and vice versa.

This is clear whilst looking at both Macbeth and his wife Lady Macbeth, as their appearances and the way the act are deceptive and generally fatal to the other characters. Macbeth’s appearance differs from his true self. He portrays himself to be strong and wise, but inside he is truly weak.

When he first faces the witches predictions, he says; “Come what come may, time and the hour runs through the roughest day.” (Act I, Scene 3) Basically he says that any good fortune that may come to him in the future will come on its own.

He wants to appear collected, strong, and noble, but in the end, he completely contradicts his statement by greedily killing men to get what he expects is his for the taking. This shows his extreme weakness and deception of being a strong, noble man as he believes what three weird strangers tell him. Just like her husband, Lady Macbeth paints herself as a very potent woman. In spite of this facade, the murders and guilt beat at her conscience until she too crumbles. She tells her husband to “Look like the innocent flower but be the serpent under’t (Act 1, Scene 5), in order to hide their true intentions whilst meeting King Duncan. Both these characters deceive others and also themselves as their original personalities are destroyed with the ambition to be king, by the thought of power and by the prophecies of the three witches.

In ‘Macbeth’, ambition is presented as a dangerous quality. It causes the downfall of both Macbeth and Lady Macbeth and triggers a series of deaths in Macbeth. Ambition has a series of consequences in the play: Macbeth is slain as a tyrant and Lady Macbeth commits suicide. Shakespeare does not give either character the opportunity to enjoy what they have achieved by deceiving the other characters. This is clearly revealed in Macbeths soliloquy in Act 5, Scene 5, where he states: She should have died hereafter;

There would have been a time for such a word.
To-morrow, and to-morrow, and to-morrow,
Creeps in this petty pace from day to day
To the last syllable of recorded time,
And all our yesterdays have lighted fools
The way to dusty death. Out, out, brief candle!
Life’s but a walking shadow, a poor player
That struts and frets his hour upon the stage
And then is heard no more: it is a tale
Told by an idiot, full of sound and fury,
Signifying nothing.

Here, Macbeth is summing up his life’s work, concluding that it’s nothing. Macbeth is saying that we are deceived if we think our lives should have meaning, he feels like this ass his ambition has left him empty. All this struggle—the fake appearance, the murder, the plotting, the self-questioning, the eternal damnation—and the world ends up exactly where it began: Malcolm will be king, and no one will remember Macbeth except as an evil, blood-thirsty traitor.

By understanding the characters motives and personalities an understanding of the representation of the human condition is established. It is clear that throughout the play desire and ambition comes before morals and the sense of power allows people to change their views and potentially become somebody their “not”. Macbeth knows to kill the king is immoral but is easily persuaded into doing so even though he knows it is fraudulent. This allows the understanding that humans are easily persuaded and although they might second-guess their actions, their lust for power and an influence on their decision making is a huge motivation to do “wrong”.

The soliloquy in Act 2, scene 1 proves that Macbeths mind begins to play tricks on him, as the guilt of what he is about to do gets the better of him. Is this a dagger which I see before me, the handle toward my hand? Come, let me clutch thee. I have thee not, and yet I see thee still. Art thou not, fatal vision, sensible to feelings as to sight? Or art thou but a dagger of the mind, a false creation, proceeding from the heat-oppressed brain? I see thee yet, in form as palpable as this which I now draw. Thou marshall’st me the way I was going. And such an instrument I was to use. Mine eyes are mode the fools o’th’other senses, or else worth all the rest, I see thee still. And on thy blade and dudgeon gouts of blood, which was no so before. There’s no such thing; it is bloody business which informs thus mine eyes.

Now o’er the on half-world nature seems dead and wicked dreams abuse the curtain’d sleep. This soliloquy in Act 2, Scene 1 implies Macbeth’s uncertainty and second thoughts about killing his king. The dagger’s appearance is somewhat ambiguous it can be read as an omen that Macbeth should proceed, or is it a final warning of his conscience? This further shows how humans will second-guess their actions and generally rely on others to push them over the edge to make their decision.

Throughout the play it is clear that appearance versus reality is a main theme in the text. Ambition and search for power allows characters such as Macbeth and Lady Macbeth to seem innocent and loyal but in reality be ‘evil’. By evaluating the way the play shows that appearances are deceptive and the consequences of each pretence it is apparent that Shakespeare is conveying the message that all humans must make a decision whether to choose the world of appearance or real world concerns. This suggests that the characters who choose to be authentic will gain rewards and the characters who are deceptive will suffer the consequences. By understanding the text, it is clear that the appearance of these characters is nothing like the reality, and this became a tragedy to themselves and others.

Macbeth as a Character vs the Real World. (2016, Apr 12). Retrieved from https://studymoose.com/macbeth-as-a-character-vs-the-real-world-essay 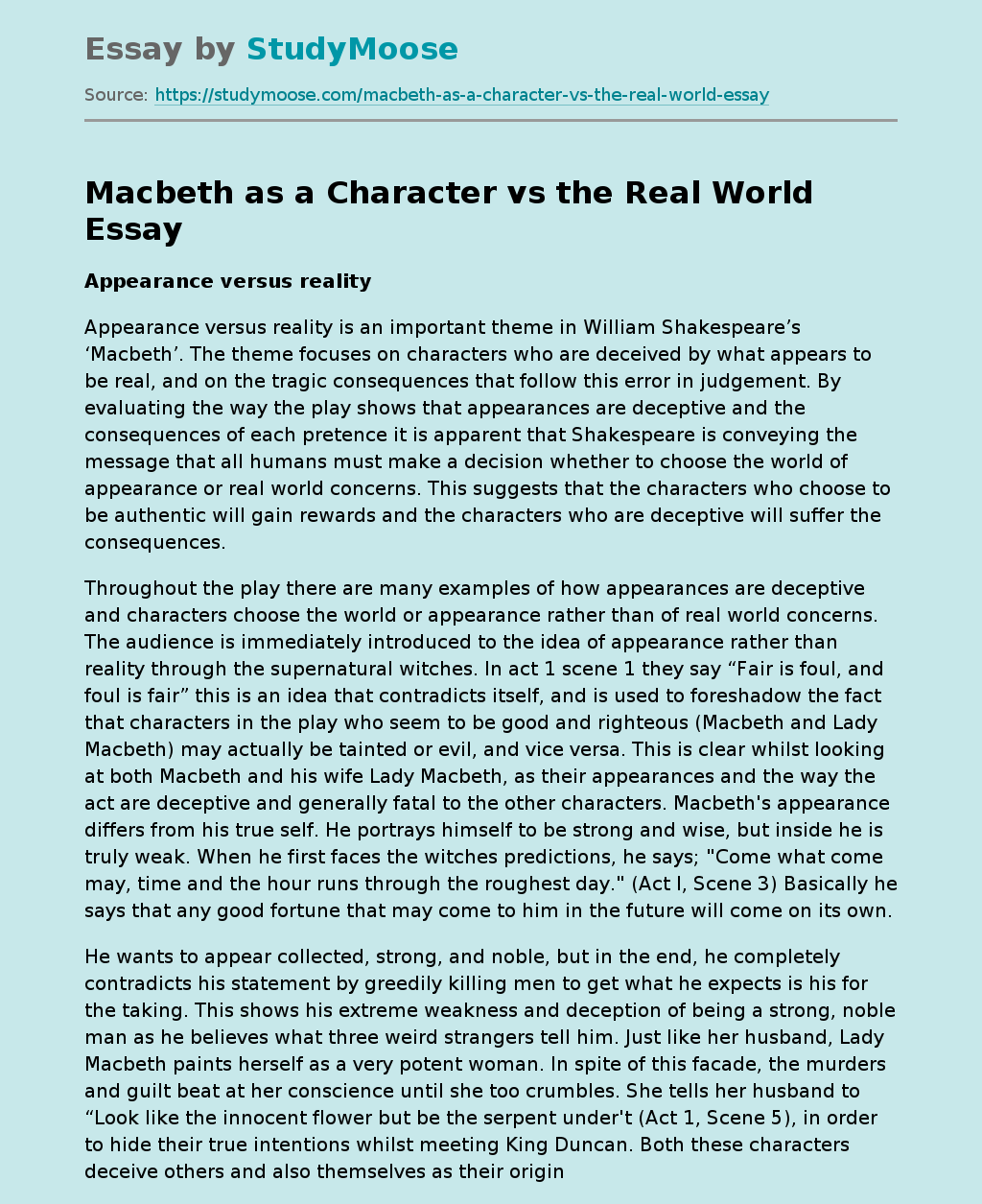