Appearance Versus Reality in "Macbeth"

Appearances are physical attributes that are perceived through outward aspects visible to the senses. However, appearances may be deceiving qualities because of their inability to divulge the hidden intentions and traits of the entity. What may seem to be innocuous and wholesome will reveal a malicious characteristic that cannot be visually perceived. The theme of appearance versus reality is integrated into William Shakespeare’s tragedy Macbeth, deemed through the paradoxical motif of “fair is foul, and foul is fair.” Two characters named Macbeth and Lady Macbeth portray the theme, demonstrating that the true intentions of a person are kept hidden, and appearances are naturally deceiving.

Don't use plagiarized sources. Get your custom essay on
“ Appearance Versus Reality in “Macbeth” ”
Get custom paper
NEW! smart matching with writer

Demonstrated through the paradox of “fair is foul, and foul is fair”, Macbeth and Lady Macbeth fabricate detrimental ambitions and views, ultimately affecting their lives and causing their downfall. Their thinking and actions change, affecting their empathetic and moral qualities, which brings out their manipulative and deceitful traits. They become arrogant and overtaken by their powerful ambition.

This consequently leads to their fear, thus triggering their desire to eliminate others that cause their paranoia and leads to their remorse. Ultimately, Macbeth and Lady Macbeth demonstrate these qualities to portray the paradoxical theme, thus resulting in a negative impact on themselves and other people they encounter in their lives.

Primarily, the paradoxical theme is portrayed through Macbeth and Lady Macbeth, demonstrating the drastic change of their empathetic and moral qualities. This leads to their manipulation and deceit. However, their initial appearances are deceiving, and the impression of their evil intentions is not evident.

Initially, Macbeth was a noble man, serving as a brave and capable warrior for Scotland. He was entitled the Thane of Glamis, having obtained power and authority. Macbeth was loyal to Scotland and gained the favour of King Duncan quickly, proving to be a worthy general. Macbeth was markedly rewarded for his services, gaining the title of Thane of Cawdor. Macbeth’s empathetic and moral qualities are clearly inviolable, proving his great honour and strong will to serve the country. However, the initial impression of Macbeth as a mighty warrior at battle is simply a deception to his masked intentions. Macbeth’s entrance foreshadows to his irrevocably evil personality: “‘So foul and fair a day I have not seen’” (Macbeth, 1.3.36). Macbeth evinces the downfall of his morality early on, demonstrating the motif. Macbeth’s conflict with morality also seeds his ambition to murder Duncan and take over the position of king of Scotland. However, Macbeth contemplates the treacherous nature of the deed, demonstrating the conflict in his key soliloquy:

If it were done when ‘tis done, then ‘twere well/

It were done quickly. If th’ assassination/

Could trammel up the consequence, and catch/

With his surcease success that but this blow/

But here, upon this bank and shoal of time,/

We’d jump the life to come. But in these cases/

We still have judgement here, that we but teach/

Bloody instructions, which, being taught, return/

To plague th’inventor: this even-handed justice/

Commends the ingredients of our poisoned chalice/

To our own lips. He’s here in double trust:/

First, as I am his kinsman and his subject,/

Strong both against the deed then, as his host,/

Who should against murderer shut the door,/

Not bear the knife myself. Besides, this Duncan/

Hath borne his faculties so meek, hath been/

So clear in his great office, that his virtues/

The deep damnation of his taking-off /

Upon the sightless couriers of the air,/

Shall blow the horrid deed in every eye,/

That tears shall drown the wind. I have no spur/

To prick the sides of my intent, but only/

Vaulting ambition, which o’erleaps itself/

Macbeth recognizes that murdering King Duncan will have implications which will disrupt his honour and morality. Macbeth tries to soften the aspects of the deed, but ironically discovers the true disgrace in committing the crime. Macbeth also foreshadows his own delusions that he will experience through the immoral example he sets, but through a moral perspective, “bloody instructions, which being taught…return to plague the inventor.” Macbeth is fully aware that his conscience will torment him, and of the judgement which instructs him to do right or wrong. He is aware of the consequences he may suffer after the deed is done, and that the king is virtuous and good. Macbeth will not survive the revenge of those who adore King Duncan, and acknowledges the fact. Macbeth still proceeds with the crime, violating his morality and destructing his conscience. The powerful motif that the witches predicted came into play, and affected Macbeth who was completely indulged by greed. Lady Macbeth was also affected by the deception of the paradox, but initially sets a different impression. Her empathetic and moral qualities are not put into effect during her first appearances. Initially, Lady Macbeth proves to be a powerful and ruthless woman, showing no signs of a conscience. Lady Macbeth is the one who plans Duncan’s murder, and pushes Macbeth into committing the crime. Lady Macbeth’s manipulation shows, and is very effective, overriding all of Macbeth’s objections.

Appearance Versus Reality in "Macbeth". (2021, Feb 04). Retrieved from https://studymoose.com/appearance-versus-reality-in-macbeth-essay 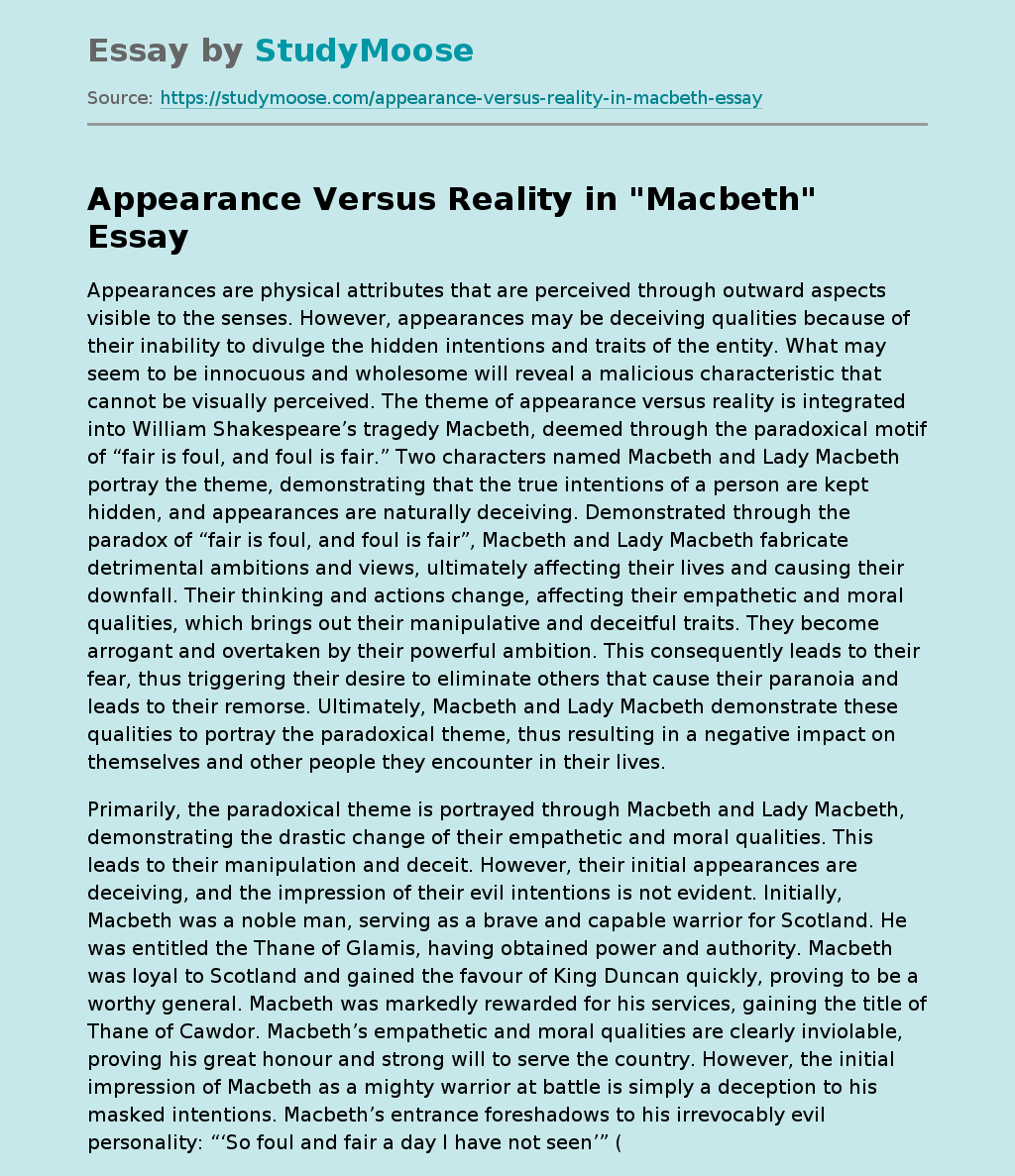