Media Connections to Appearance vs. Reality

Themes are the framework of works of art. Just like a backbone in humans is needed to provide support and aid movement, a theme is used to send a message across to the audience and provide the means used to send it. Appearance vs. reality is a theme most commonly used in writing. It requires the audience to think about the fact that the piece of art they have just read or seen has more to it. This theme is used in Nadine Gordimer’s “Once Upon a Time”, Julio Polanco’s “Identity” and American rock band Evanescence’s song, “Everybody’s fool”.

Turn in your highest-quality paper
Get a qualified writer to help you with
“ Media Connections to Appearance vs. Reality ”
Get high-quality paper
NEW! AI matching with writer

It is used in the plot of each work to give three major underlying messages. The first is that appearance exists to hide the truth, the second is that reality is often a harsher world and the lastly, they use it as an umbrella to express their feelings and thoughts.

Reality is the state of things as they actually exist.

Appearance on the other hand, was made to cover up reality. There only reason as to why the original, fixed state of things has to be altered is to hide the truth. For instance, the main characters of Gordimer’s story are a family living in a suburb that are racist but try not to make it seem so. They put up a silhouette of an intruder as a warning to future burglars. The silhouette is neither black nor white proving that the family is not racist (Godimer).

The possible burglars the family was expecting were the coloured people from the other side of town. This is racist because they see them as harmful because of their colour.

Likewise, Julio Polanco’s poem also shows that there is something hidden under all the glamour and falsity that is appearance. It is about pretty flowers that are “always watered, fed… but harnessed to a pot of dirt” (Polanco). The flowers appear better off because they are being taken care of but in reality, they are not truly happy because they are not free. Lastly, Evanescence again reinforces this idea through the behaviour discussed in their song. They describe how one alters their behaviour when around others. The person has “no flaws when they are pretending” (Lee). This is because they use their changed behaviour to cover up their true imperfect selves. Appearances are often made because it is an easier alternative to the real thing.

Life is full of hardships, struggle and anxiety which one must face almost daily. This becomes too difficult for people and they create an idealistic way of life which appears easier and better. For example, in Gordimer’s story, the family does not want to face violence from the coloured people. “There were riots, but these were outside the city, where people of another color were quartered” (Godimer). Due to this, the family creates a safe home with lots of security reinforcements and this keeps the danger out so they do not have to face it. Similarly, Evanescence’s song tells readers about a character who covers up their true personality.

They sing “without the mask where will you hide? Can’t find yourself lost in your lie” (Lee). The person creates a new self- image because they probably did not like who they used to be. In like manner, Julio Polanco makes an even stronger point of the harshness of reality with descriptive words in his poem. The flowers are well kept and cared for unlike the weed that is “exposed to the madness of the vast, eternal sky” (Polanco). The condition the weed grows in is harsh so even though the flower is not free, it lives in a safer environment. Appearance is also used broadly by the writers as a metaphor to express their opinions on political or social issues.

Her opinion is that apartheid benefits no one. On the other hand, Julio Polanco writes about a social issue. In his poem he says, “I’d rather be a tall ugly weed” (Polanco). This is an extended metaphor used to show how the narrator prefers being strong and free while suffering hardship as opposed to being under the rule of another. Julio Polanco shows that he believes in the right of freedom. By the same token, Evanescence’s style in their lyrics voices their opinion on hypocrites. They think these kinds of people go from fooling everyone to becoming “everyone’s fool” (Lee). In conclusion, these artists use the theme to express themselves.

Deeper thoughts are stimulated in the audience when the theme of appearance vs. reality is used. It is a message within a message. Nadine Gordimer, Julio Polanco and Evanescence are only a few of the artists who use this theme. In their works, they show that appearance is only serves as a blindfold to the truth; appearance exists because reality can become too hard to face and lastly, use it as a means of expression. The theme of appearance vs. reality is like a matryoshka doll, the message is there, you just have to go through all the other layers.

Media Connections to Appearance vs. Reality. (2016, Oct 29). Retrieved from https://studymoose.com/media-connections-to-appearance-vs-reality-essay 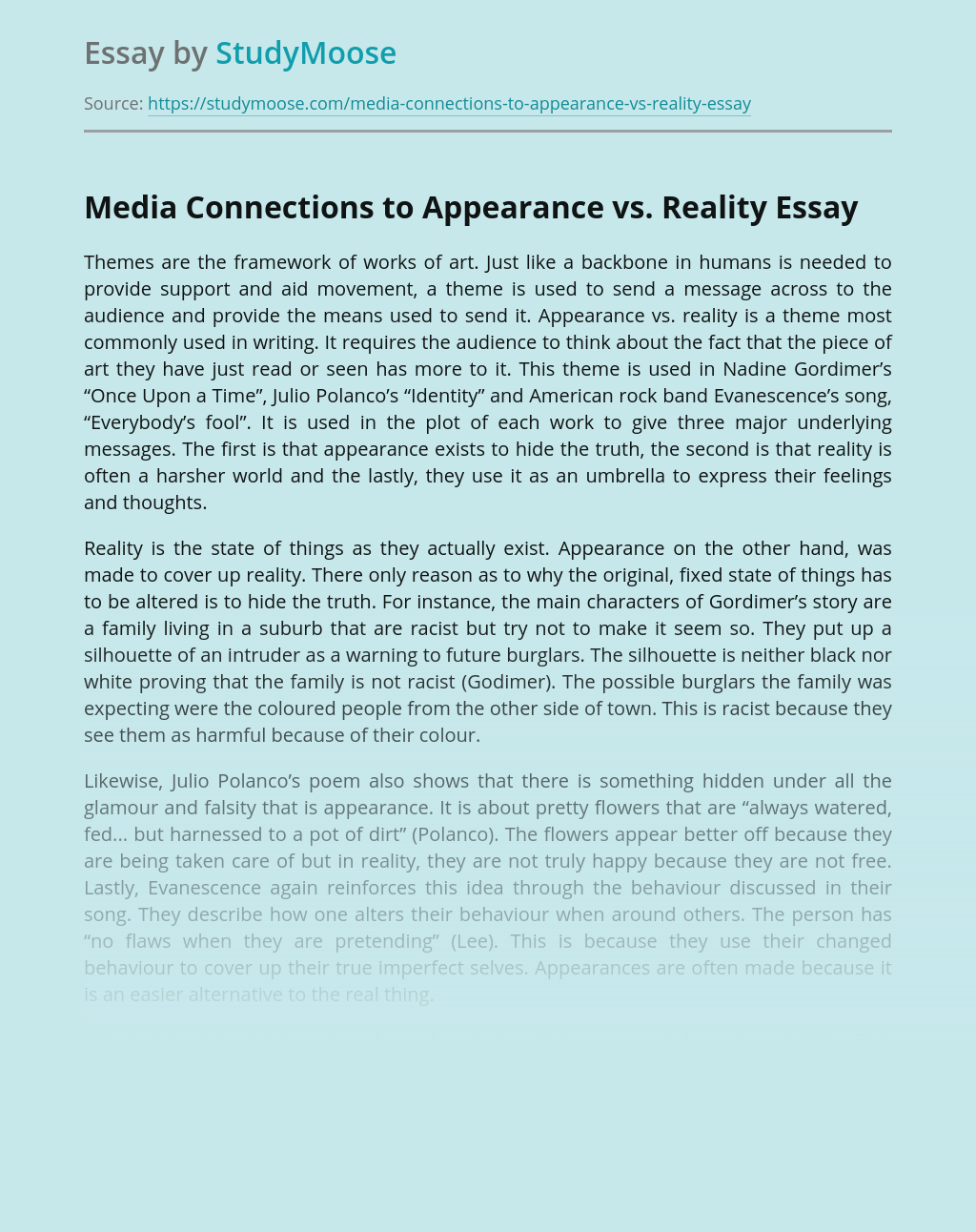 Turn in your highest-quality paper
Get a qualified writer to help you with
“ Media Connections to Appearance vs. Reality ”
Get high-quality paper
Helping students since 2015
Stay Safe, Stay Original