Appearance in Reality in Hoch's "Zoo"

What is the difference between a reality and an illusion? Sometimes people believe a distinctive difference between the two exists i. e. tangible or nontangible. However, the same people might agree that a difference does not exist when considering borderlines for example. The lines aren’t actually lines drawn into the ground; moreover, hypothetical lines drawn on a map. Not only can illusions become realities, but our perceived appearances and illusions have the ability to produce realities.

Turn in your highest-quality paper
Get a qualified writer to help you with
“ Appearance in Reality in Hoch’s “Zoo” ”
Get high-quality paper
NEW! AI matching with writer

In Nietzschel’s books he stressed the idea that physiologically people want to believe in illusions and that they are key for differentiation between an illusion and a reality. “Sometimes people don’t want to hear the truth because they don’t want their illusions destroyed” – Friedrich Nietzsche. Edward D. Hoch focuses on the concept of illusions creating realities in his short story Zoo.

When Hugo arrives on Earth with the zoo, the “peoples of Earth” file around the spaceship zoo each charged a dollar for admission to see “wild” creatures trapped in cages within the spaceship. When Professor Hugo returns the creatures to their home planet, the creatures tell their families how fantastic the trip was visiting the many worlds along with the different people. At this point it is understood the creatures take the role of the audience and not the attraction.

Zoo’s content stems from illusions that could come right out of a science fiction movie or book.

“Three-legged creatures from Venus. Or tall, thin men from Mars. Or snake-like horrors from some even more distant planet. ” Before even looking into the meaning behind particular words and sentences within the story, the actually story creates a distinction between reality and illusion. The story references traveling to Venus and life from other planets, neither of which we have found to be possible or true.

Other than the actual content within the story being an illusion, throughout the story, Hoch creates the distinction between illusions and realities while blurring them together. Both the “peoples of Earth” and the “horse-spider people” fall under the illusion that they are the spectators and not the attraction. However, in reality they fulfill both rolls. The barred cages exist as a prison to contain the creatures to the “peoples of Earth” while to the “horse-spider people”, the cages exist to protect them from the beings they encounter.

Professor Hoch remains as the only being with the role of a spectator who views the world as his zoo profiting from its members to be part of his illusion. Hoch’s Zoo stands as a perfect example of how appearance and reality stems from illusion. Reality exists based off of other people’s beliefs and illusions of what they subjectively think of the situation that they undergo. Similarly as good could not exist without bad, not only do illusions create realties but also help to distinguish between illusion and reality.

Appearance in Reality in Hoch's "Zoo". (2016, Dec 01). Retrieved from https://studymoose.com/appearance-in-reality-in-hochs-zoo-essay 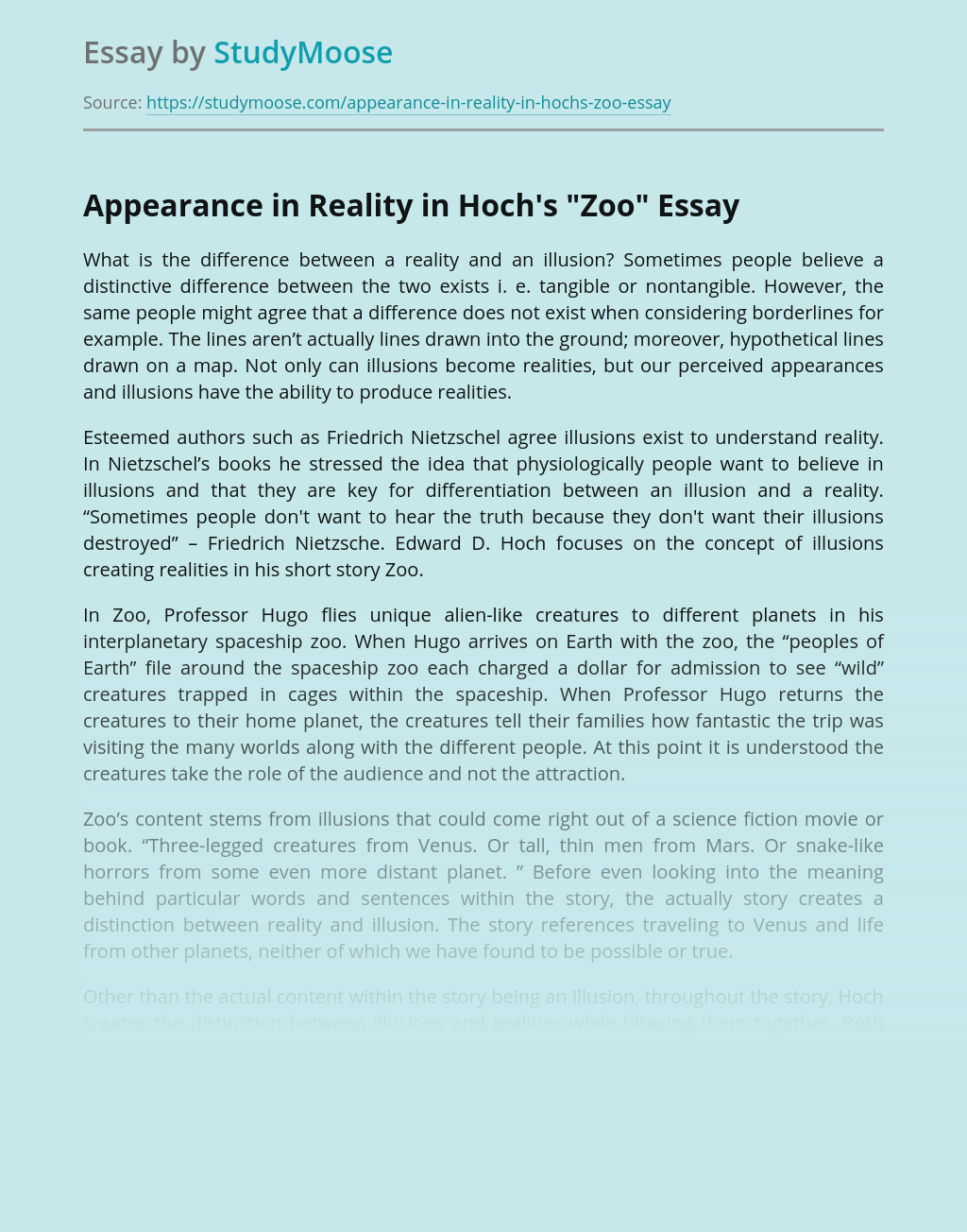 Turn in your highest-quality paper
Get a qualified writer to help you with
“ Appearance in Reality in Hoch’s “Zoo” ”
Get high-quality paper
Helping students since 2015
Stay Safe, Stay Original