It is all about Looking Good: A Comparison between The Role of Appearance vs. Reality In Macbeth and Frankenstein. Macbeth is one of the works of playwright William Shakespeare and it is considered one of his most powerful tragedies. It tells the story of a good warrior, Macbeth, who turns bad because of ambition and greed. It is a classic tale of biting more than one can chew. A few centuries later, an author named Mary Shelley wrote a gothic novel, Frankenstein, about a young scientist named Victor Frankenstein who creates a being and abandons it.

Don't use plagiarized sources. Get your custom essay on
“ Appearance vs. Reality – Comparative Essay ”
Get custom paper
NEW! smart matching with writer

The creature tries to be accepted by both society and his creator. Although these two texts are of different genres and eras, with Shakespeare’s play showing strong themes of ambition and corruption and Shelley’s novel showing themes of justice, madness and the sublime, both authors use the theme of appearance vs. reality. They use this to show how human judgment is based solely on appearances, how an individual can change because of this judgment and how appearance plays a role in determining one’s place in society.

It is human nature to judge others on their outward looks. People depend mostly on their visual senses as the strongest point of judgment. For example, in the play Macbeth, Macbeth and his wife deceive the king with their actions and words to make him feel welcome while they are actually planning his murder. (Macbeth I. v). They know that people judge on appearance and decide to use it to their advantage.

They act how they want people to see them, as loyal subjects of the king as opposed to deceitful, cunning and ambitious people which was what they really were. As said by Lady Macbeth, “to [deceive] the time, look like the time.” (Macbeth I. v.70-71).

As vision is the primary sense of man, the basis of human judgment is the shape, colour or texture of the overall outward appearance. This determines if something is good or bad. In Frankenstein, Victor Frankenstein’s creation had yellow skin, watery eyes and straight black lips. He was not what was considered beautiful (Shelley, 58). The creature looked ugly and vile, and ugly and vile is not considered good so it was judged as bad. Eventually, appearance catches up with reality and an individual could change or become what others think they are because of how they look.

The judgment dished out by people can be harmful to both the individual being judged and the ones doing the judging. It can lead to one building up different feelings inside of them. In Macbeth’s case, it led to overconfidence. He started out good; he was a brave and loyal warrior for his country (Macbeth I. ii.30-45). Then he committed a murder to satisfy his ambition to become king (II. ii) and he got away with it because no one could guess from the way he acts the bad intentions he has or the crime he has committed. He goes on killing and still no can tell because everyone keeps judging based on what they see on the outside. Macbeth reaches a point where he decides to let “the very firstlings of [his] heart be the very firstlings of [his] hand” (IV. i.161-162).

By this time, Macbeth has turned into a tyrant and this is harmful to both him and the people of Scotland. Likewise, the judgment dished out for Frankenstein’s creation had a detrimental effect. He was initially compassionate and thoughtful until his naïve view of humans was destroyed by the unjust cruelty he faced (“Frankenstein- The Theme of Appearance.” 1). The creature was good but was never given the chance to so much as speak before he was turned away because of the way he looked (Shelley, 108). Eventually, he becomes threatening and malicious because of the hurtful treatment he had to bear (Shelley 148). Wrong judgment can have an effect, as shown in both Macbeth and the creature’s situation. The one difference is that Macbeth was already ambitious but got worse while in the creature’s case, he completely turned around and went from good to bad. In both cases, each individual’s place in society was affected.

People are ranked into categories in society. It creates a social hierarchy where everyone knows their place and who they should associate with. There are ways to determine this and appearance plays a role. For example, if there was no predetermined idea of how good things should look and instead morals, intelligence and compassion was emphasized more than one’s outward appearance, Frankenstein’s creature would never have suffered isolation because of his unattractiveness (“Frankenstein- The Theme of Appearance.” 1).

His place in society is at the very bottom because he has no one else who is willing to be associated with him and no one else who is like him. In Macbeth’s case, he was aiming for the highest rank; Kingship. In his time, a king is considered closest to God and therefore the highest position in social hierarchy. Macbeth kills the king to become king and because no one judged him as capable of committing such an act, but instead judged him on how he appeared to be a loyal subject of the king, he attained the highest position in society.

The theme of things not always being as they should be has been used throughout the history of literature. This is shown by Shakespeare and Shelley who wrote in completely different contexts and centuries. They show how judging based on appearances can have an effect on the individual, how the visual sense is man’s strongest sense so judgment is instinctively based on appearances and how the way one looks puts them in their place in society. The prejudice of looking good meaning being good and looking bad meaning being bad has been around for a while and will probably be around for as long as humans are able to see. 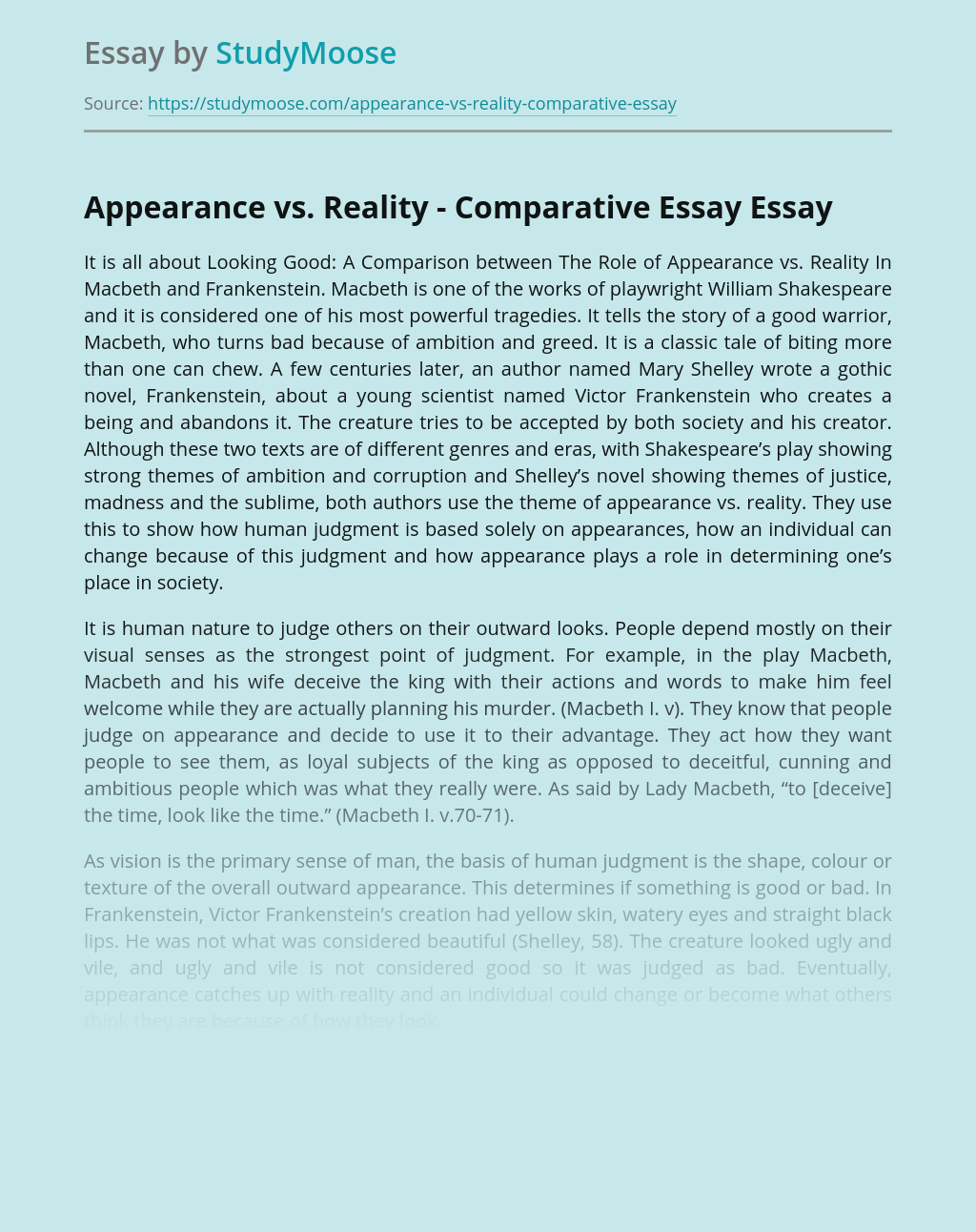