“Choose a play in which there is a conflict between key characters. Explain how the conflict arises and, by referring to appropriate techniques, go on to say how the conflict adds tension to the play, and whether is it resolved.”

William Shakespeare’s shortest tragedy ‘Macbeth,’ charts the rise and fall of the titular character and his wife, Lady Macbeth. Macbeth is one of the kings most trusted thanes, a “worthy cousin,” but he betrays that trust and murders the king after being manipulated into agreeing to commit the crime by his ambitious wife.

Don't use plagiarized sources. Get your custom essay on
“ Conflict between Macbeth and Lady Macbeth ”
Get custom paper
NEW! smart matching with writer

This conflict drives a wedge between the characters and creates tension at a number of points in the play. Eventually all of their treachery is discovered, and Macbeth and his wife both face terrible consequences for their earlier actions.

The conflict first arises between the key characters, Macbeth and Lady Macbeth, when Macbeth arrives home from battle. After the battle Macbeth came across the “weird sisters,” who hailed him as “king hereafter”.

His ambition is immediately made known to the audience in his soliloquy where he admits his “black and deep desires”, although he reasons with himself and comes to the conclusion that: “If chance will have me king, why chance may crown me without my stir.” However, Macbeth’s “dearest partner of greatness” is extremely ambitious and is already set on murdering the king so that herself and her husband can claim the crown and is angry when she discovers that he has had a change of heart.

Lady Macbeth soon overcomes this, as she is as cunning as she is ambitious, manipulating her husband by questioning his manhood and calling him a “coward.”

After the murder, Macbeth instantly regrets it and further conflict is created between the characters as Lady Macbeth has to interfere and plants the bloody daggers on the drugged guards, as her husband is too shaken to do it. Macbeth rambles that he has “murdered sleep”. She scolds him for being so weak, telling him, “My hands are of your colour but I would shame to wear a heart so white,” and that “a little water” will clear them of the deed. The two characters will experience a role reversal later on in the play.

Although they have achieved their goal, Macbeth is still unhappy as he views himself as having a “fruitless crown”, as he and his wife have no heir. There is also tension created between Macbeth and Banquo, as Macbeth fears Banquo suspects him of the murder, as well as the witches prophecy that Banquo “shalt get kings”, which is heavy on Macbeth’s mind. To solve his problem, Macbeth hires assassins to murder his friends, as tells the assassins that Banquo’s young, innocent son should also “embrace the fate of that dark hour”. Macbeth does not consort with his wife about their murder, which is on of the early signs that their relationship is beginning to deteriorate due to the tension caused by the original murder.

There is tension in the famous ‘Banquet Scene’, which is a turning point for Macbeth and the point in the play where he fully commits to evil. Macbeth’s psychotic break during which he see’s Banquo’s “bloodied” ghost causes tension as it is viewed by his royal lords and kinsmen and gives them reason to believe there is something amiss. Lady Macbeth tried to pull her husband together, asking him “Are you a man?”, again trying to manipulate him by challenging his manhood. Although this worked before, it doesn’t now. This could be due to the murder of the king changing Macbeth as a man, but murder is not new to Macbeth so it is much more likely that the conflict earlier on in the play has caused a loss of respect and closeness between himself and his wife.

As the play goes on, Macbeth and his wife grow further apart. Macbeth becomes the one “full of direst cruelty,” who seems ruthless and remorseless and Lady Macbeth is the one who cannot have a peaceful sleep. This role reversal is a common theme in many of Shakespeare’s dramas. Tension is created as while Lady Macbeth is asleep, she imagines blood on her hands, saying “Out damned spot”, and reveals her and Macbeth’s guilt to her hand maiden and the doctor. Lady Macbeth eventually commits suicide, so the conflict is unresolved. Upon hearing the nears Macbeth simply says, “She should have died hereafter.” It is not long until he also dies, which is a direct result of the original murder of the king.

In conclusion, the conflict first arises between the key characters, Macbeth and Lady Macbeth, when they decide to murder the king but then Macbeth has a change of heart and has to be bullied into it by his wife. Further tension is created between the key characters after the murder due to guilt and the psychological consequences take a toll on Macbeth, as well as his wife, in different ways. Macbeth and his wife experience a role reversal and grow further apart until eventually Lady Macbeth commits suicide, unable to deal with her guilt and Macbeth dies soon after in an equally gruesome manner. The conflict is not resolved as there is no reconciliation between the key characters.

Conflict between Macbeth and Lady Macbeth. (2016, Jun 17). Retrieved from https://studymoose.com/conflict-between-macbeth-and-lady-macbeth-essay 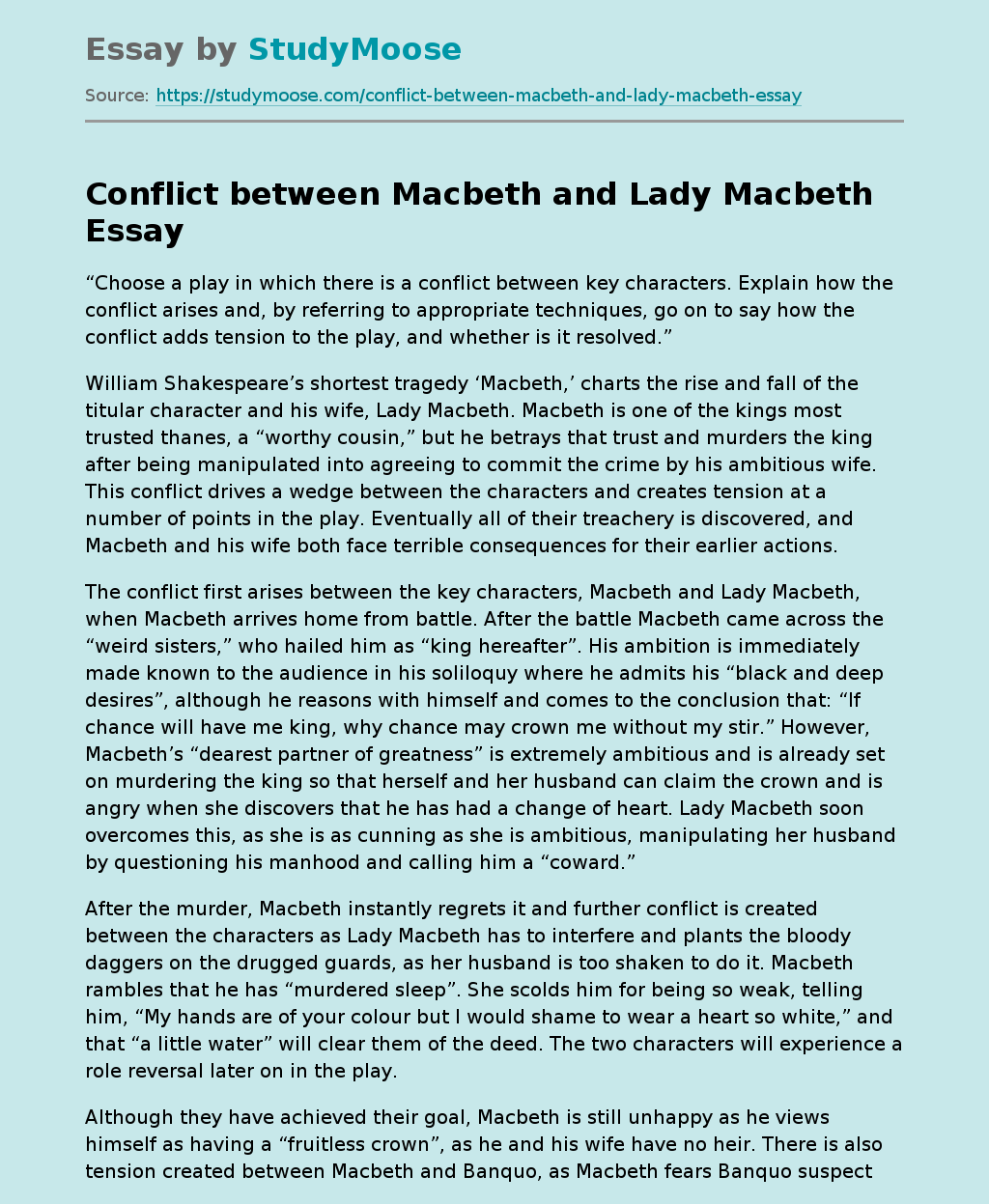