Lady Macbeth is a central figure in Shakespeare’s play “ The Tragedy of Macbeth. ” She is a controversial character of deep mystery and great ambition. In the essay, “Lady Macbeth: Infirm of Purpose” Joan Larsen Klein analyzes what was the role of woman during the Shakespearian times and how Lady Macbeth portrays or defies it.

I think that Klein thesis is illustrated when she notes, “ Lady Macbeth, despite her attempt to unsex herself, is never able to separate herself completely from womankind-unlike her husband, who becomes less and worse that a man” (169) Klein’s main argument is that although Lady Macbeth wants to become the stereotypical male, aggressive, ruthless and cruel, which, according to her, will enable her to be stronger enough to assassinate King Duncan, she is incapable to strip away those female traits such as kindness, innocence and weakness.

Don't use plagiarized sources. Get your custom essay on
“ Critical Essay Explication and Response of Klein’s Essay “Lady Macbeth: Infirm of Purpose.” ”
Get custom paper
NEW! smart matching with writer

Overall, Klein uses several examples to defend her position that women are held inferior and less responsible than men, whether they follow the demands of their husbands or seek their own fate.

At the beginning of the play Lady Macbeth is presented as not the typical female of the that time period, but as someone who is ambitious and is controlled by dark powers. According to Klein, Lady Macbeth’s temptation to sin is very similar to Eve’s temptation to the serpent as, “the serpent was able to seduce Eve…because she was the weaker vessel” (Klein 168).

In this line, Klein argues that women are seen as weaker than man, unable to resist to the evil forces, therefore falling into temptation.

In both cases the female figure is damaged because like Eve, Lady Macbeth looses her innocence and fragility. Before the murder of King Duncan, Lady Macbeth is portrayed as evil, but still weak to fall under temptation. Afterwards, Klein notes that, “Only Lady Macbeth suffers now the repetition of the horror of Duncan’s death” (176) After the death of King Duncan, her feminine weakness is revealed as she falls into insanity as a result of her guilty conscience.

It’s interesting to see how easily Macbeth rises over his guilt and how helplessly Lady Macbeth sinks into it. Also Klein argues that as soon as Macbeth becomes king, Lady Macbeth looses her position in society and home. Klein notes, “There is no room for her [Lady Macbeth] in the exclusive male world of treason and revenge” (174). This statement demonstrates how inferior a woman is held during that period of time. A woman is not even suspected to be participant in a deviant behavior, as it happens with Lady Macbeth.

She is considered fragile to even hear that King Duncan is killed. As Klein notes, “ Macbeth does not tell Lady Macbeth that he plan to kill Banquo” (175), keeping her out of his plans. Klein suggests that Lady Macbeth loses her position as a housekeeper and accomplice when Macbeth gains confidence. Evidently, although Lady Macbeth is ambitious for her husband to become king, she was never a concern or part of the ambitious future of Macbeth.

The arguments and examples that Klein provides support my idea that Shakespeare’s play “ the Tragedy of Macbeth” illustrates women inferiority during that period of time. Klein analysis is a good reference to demonstrate inequality among the two genders and how women are not held responsible even for deviant behavior. Work Cited Klein, Joan Larsen. “Lady Macbeth: Infirm of Purpose. ” The Tragedy of Macbeth. Ed. Sylvan Barnet. New York: Signet Classic, 1998. 168-179. Print. 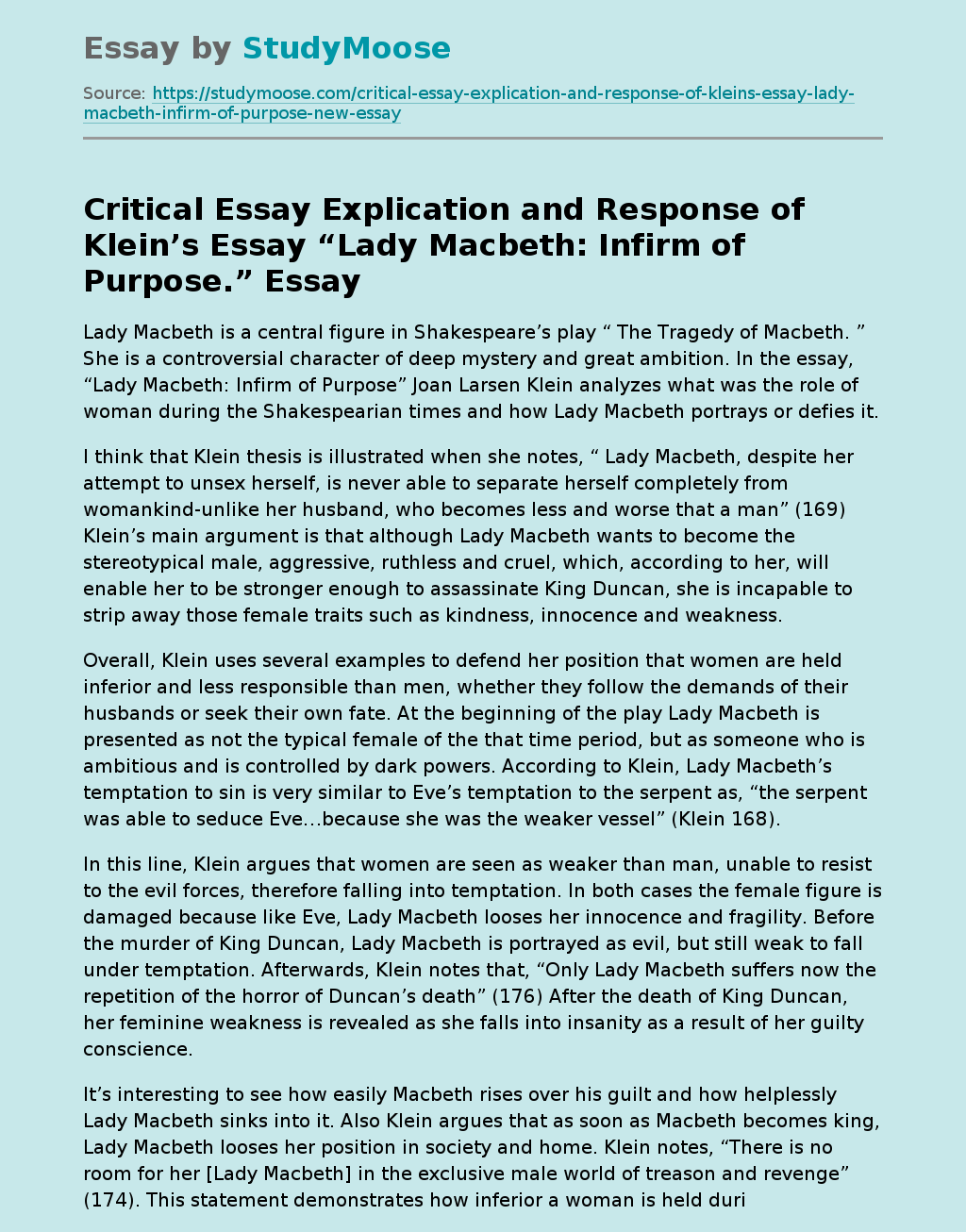