Tuesday, April 20, 1999, was a turning point in the lives of many Columbine students and families. Eric Harris and Dylan Klebold, two former students at Columbine High School, went to school on that day for one purpose, to annihilate the school building as well as the student body. Although Eric and Dylan’s bombs did not detonate, they still succeeded in destroying the lives and families of the twelve students and the one teacher that died. The Columbine High School shooting occurred because of the premeditation of the shooters, the event of the school, and the results of the shooting.

Eric and Dylan were just like most kids now a days entering high school. They came not knowing what to expect and soon realized no one even cared that they were there. They were bullied and picked on all the time. Eric and Dylan started a club called the Trench Coat Mafia which was known for its violent and vulgar language. Sometimes they would walk around school wearing trench coats to make them seem stronger and to “protect” themselves in a way.

Entering tenth grade was sort of the same for them, but it seemed to get worse quick. They started to participate in drinking, smoking, and petty crimes to make them more popular.

The only people they got popular with were the police because they were constantly arrested for breaking into cars, homes, and stealing from stores. Eric over the course of all this developed serious anger problems and began taking Zoloft, a depressant, to make it better, but he started abusing the drugs and selling them for money.

They made videotapes in Dylan’s basement showing them making pipe bombs and other explosives and talking about killing sprees. When they finally decided that they were going to do a killing spree in Columbine, they made more videos apologizing to their parents and other people and showing their ammunition. On Tuesday, April 20, 1999, Eric and Dylan left their houses as if it were a normal day, but the night before they had packed their book bags and some duffle bags with guns, rifles, explosives, pipe bombs, and 7-8 actual bombs. It was a normal day until around 11:00 a.m., Eric and Dylan entered the cafeteria with two rifles in hand firing random shots everywhere. People scrambled to get out of the cafeteria, some thinking it was a joke and others realizing it was real. When the cafeteria was empty, they set up two bombs at opposite ends of the cafeteria. When they did not detonate, they were mad. After this first mishap, they ran across the school campus looking to shoot anyone in sight and then they reached the library.

The library is where they kill 7 out of 13 people. They taunted and fired random shots to scare the students that scrambled under the tables trying to protect themselves. Some were successful and some were not. After the library they returned to the cafeteria and this is where they committed suicide with one of the pipe bombs. The result of the shooting brought a devastating feeling on all the families and thankfulness to the families of the students that were not harmed. “Eric and Dylan are responsible for what they did, but Columbine is responsible for creating Eric and Dylan”. The event of Columbine still haunts us today with some of the more recent school shootings such as Sandy Hook Elementary. We will always remember what happened that Tuesday and try to prevent this ring of school shootings that seems to keep growing larger and larger from occurring anymore. The Columbine High School shooting occurred because of the premeditation of the shooters, the event at the school, and the results of the shooting. 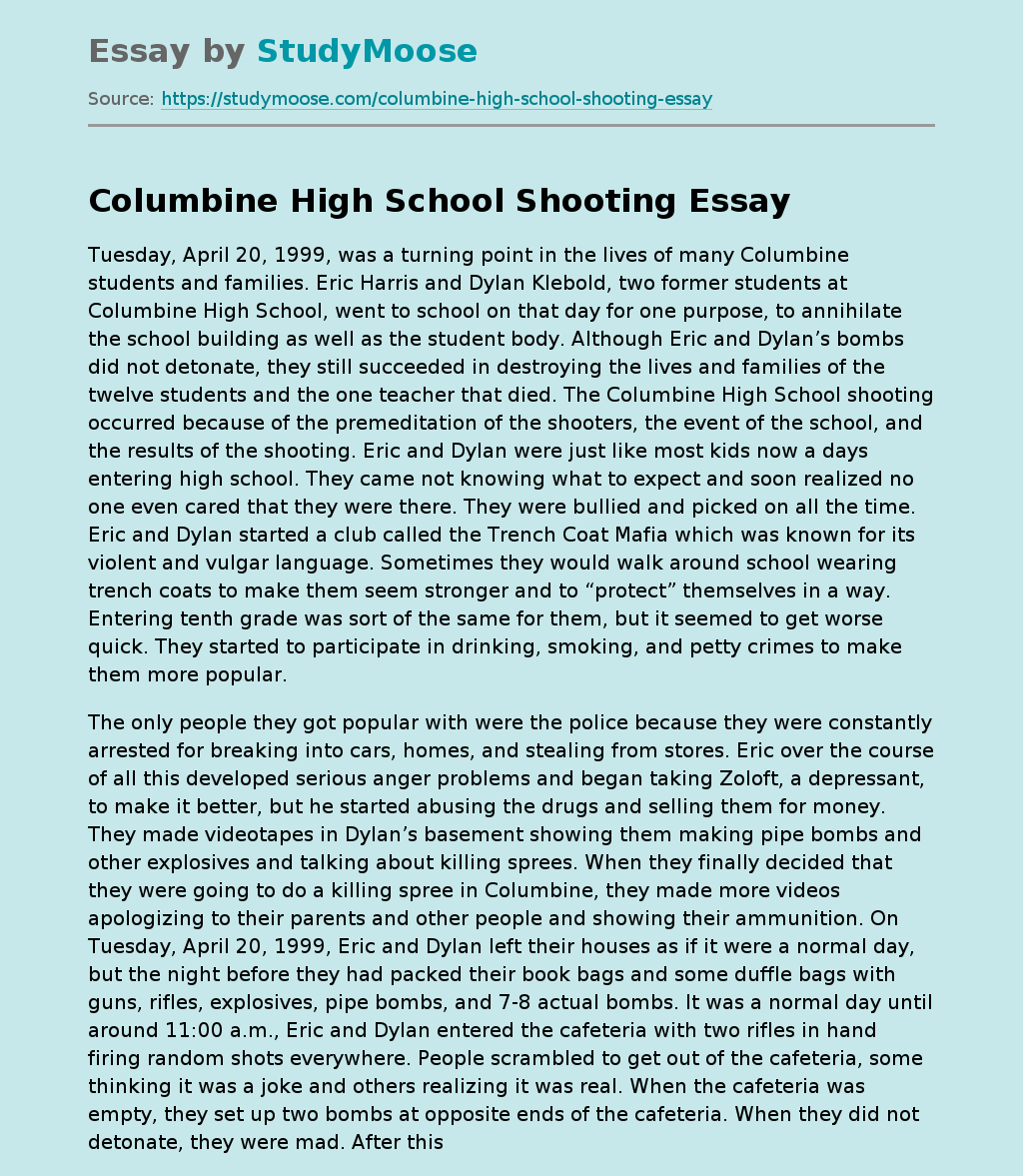