Through out this novel, a lot of tragic and powerful events transpire. They make the reader think quite a bit on what they have just read and after this, you tend to react. These events and occurrences are the main idea behind the story and they continue to constantly grab your attention and you keep you focused on what is going on in the novel. However, too many big impact and negative events take away from the story and it’s traditional role of focusing on one major element through out the book.

The reader is ceased of time to actually think about what has just happened, before something else suddenly does.

Beatrice Culleton has a liking for an eventful novel and it is definitely noticeable. In the first chapter of this book, we learn that April and her younger sister, Cheryl are taken away their parents, due to a severe alcohol problem. From here in, the negative events start to occur.

After April and Cheryl are removed from their family home, they tend to grow independent and look out for each other. Along these lines, they endure many challenges and new experiences. They end up going to endless foster homes during their child hood years. The two of them travel from home to home and are involved in different situations at each. One of the worst environments from both of the girls was at the DeRosier residence.

After April begins to form into a mature woman and moves on with her life, she ends up moving to the city of Winnipeg living in the core of downtown.

At this point, she begins to see the occasional man every now and then, due to her acquaintances at her law firm office. Just when you thought everything was going good for April, things take a turn for the un-expected. The man who April believed was a wholesome, respectful business associate was nothing more than a cheating coward going behind his wife’s back to see April. Although this is a serious problem, I couldn’t help it laugh when this was mentioned in the novel. The reason being, is how many things can go wrong for April at this point? She’s had a rocky childhood, troubles at work with co-workers, and now this?

The second most striking and shocking event that Culleton brought upon the reader was in Chapter 12, when April was raped while in the car. It was not only bad enough that Cheryl was in the hospital prior to this, due to severe injuries after being beaten, but also now it was April who was in the worse situation. The reader is almost shocked, but at the same time, wondering what is going to happen next. If it was Beatrice Culleton’s intention to place these tragic events in place after each other repeatedly to the keep the reader involved, she did an excellent job. April and Cheryl experienced a string of bad luck and misfortune their whole life, and to read all of this is sometimes unbelievable. That goes to show that the native culture can be treated poorly, and it isn’t right.

The final and biggest occurrence in April Raintree is in Chapter 16. Cheryl decided she couldn’t go on with life anymore and committed suicide by jumping off of a bridge. It’s ironic how this happened, seeing as how their mother took her own life by enduring in the same tragic practice. April then moves into a state of mourning with Roger Madison by her side for comfort. Before the reader can make sense of what has just happened, we are told of another detail of Cheryl’s past, her child. Not to mention, finding out about their long lost parents from Cheryl’s many journal entries left underneath her bed in a shoebox after her death. I can give Culleton credit for writing an exciting novel and taking the reader to the final end of the book still trying to get over what they have just read.

In conclusion, this story line would have made sense starring more action filled characters and not young native women. Beatrice Culleton throws in negative occurrences way too often, and the story looses its happiness that we once had read while April and Cheryl were only children. The memories of each of the girls writing back and fourth to each other while in the foster homes sounds bliss at this point.

It seems so un-real and out of the ordinary that both of the sisters experience all of this during one lifetime. On the positive side however, the author wrote a memorable novel that kept you in tune through out the story. You were provoked to keep on reading more and more, and for some, that rarely is the case while doing a novel study such as this one.

One thing that was impressive is how Culleton ended the book off of on a positive note for once. April ends up being the foster mother to her sister’s child, Henry Liberty. With Roger by her side as always, April finally has some happiness in her life. 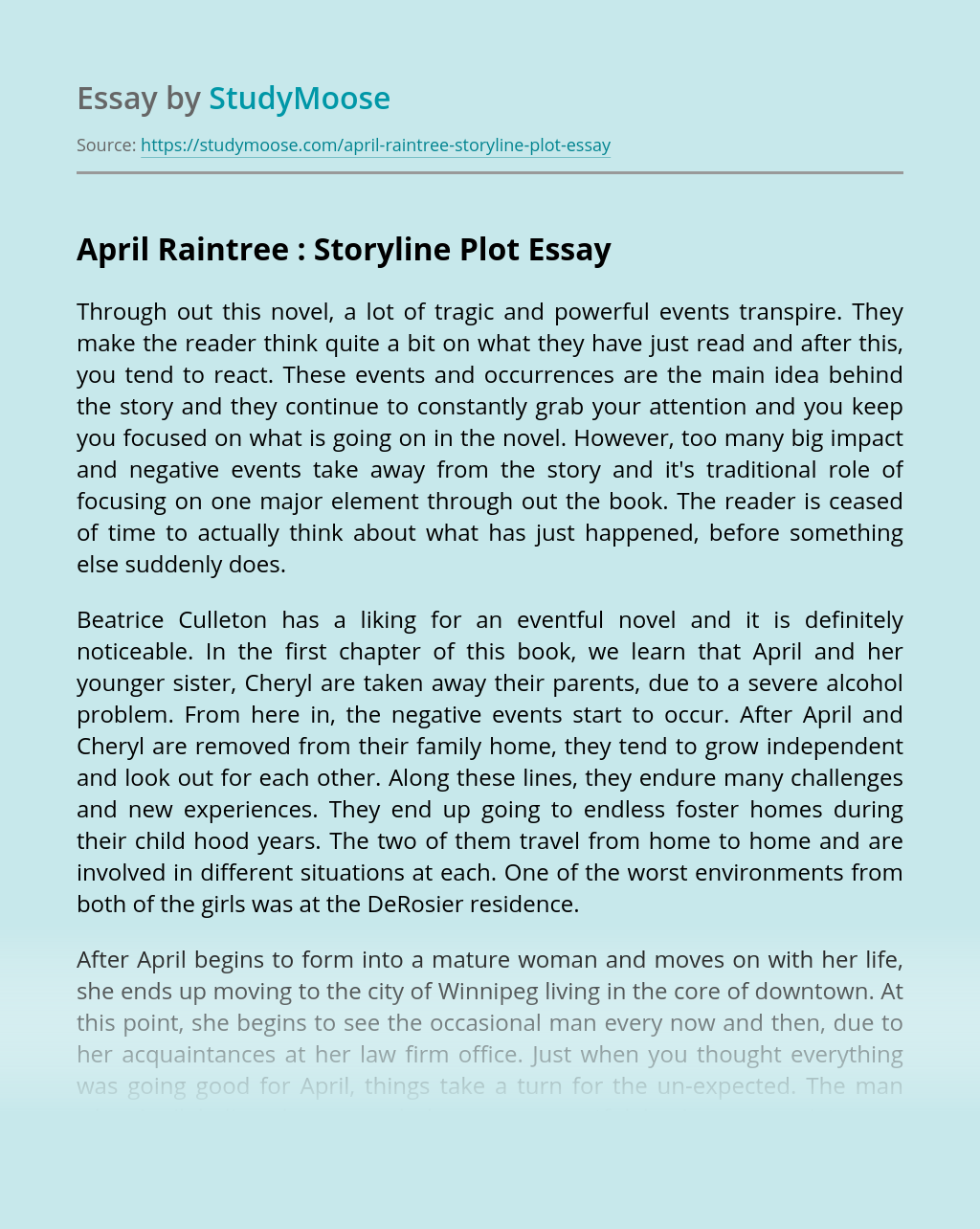