The book April Morning by Howard Fast is a dramatic story of the bloody battle of Lexington set up with a one day structure from the view of a fifteen year old boy turning into a man. In the book we see the life of Adam Cooper changing from child to man in the matter of one day. Each chapter is a different time period of the day telling us what has happened and what the effects were on his life.

Adam Cooper is a fifteen-year-old boy living in colonial Lexington, Massachusetts with his family. He feels demoralized by his father, Moses Cooper, but finds consolation from Granny Cooper, his paternal grandmother. When a meeting of the township Committee is called on the evening of April 18th, Adam wishes to attend but his father questions whether or not his son is a man and has earned the right to attend the meeting. Instead of attending the meeting, Adam visits his neighbor Ruth Simmons, a distant relative whom he loves whom he loves and sees himself marrying in the distant future.

When his father returns home from the meeting, Adam eavesdrop as Moses tells his wife Sarah and Granny Cooper what happened, as the colonial communities prepare for a possible confrontation with the British army. During the late night early morning, a rider arrives in Lexington, waking up the community with news that the British army is on the march to Concord to take out supplies and ammunition that is being stored by colonists for a possible rebellion.

Once the news of the night rider reaches the town the committeemen hold a muster for the militia, and Adam decides to sign the muster book and commit to fighting for the militia. His father is present when he is signing the muster and allows for it to happen. Moses Cooper no longer sees his son as a boy but as a determined man willing to fight for his family and community.

Both Adam and his father prepared themselves for the battle and a total of seventy militia men wait for the arrival of the British army. Moses Cooper argues persuasively with the committeemen that the small number of men can’t stand up to the thousands of Redcoat troops they will be greeting alone, and so it’s decided that they will state their case but do no more; they decide to talk it out rather than to fight. However when the British finally reach Lexington, the officers are sneeringly dismissive of the colonists and tell them to leave the common and a mysterious shot is fired causing the British troops to begin firing on the colonists. The British massacred the small militia that stood in front of them, and Adam watched as his father and other men he had known his entire life be shot down.

Adam hides in terror and cannot go home because of the British troops in town and it is unsafe. Adam is off to the woods to find the rest of the militia and he is almost discovered by British soldiers, but before they do so are called away to march towards Concord. Adam runs from the British and is shot at by redcoats, only to be caught in the grip of an older colonial man named Solomon Chandler, who helps Adam and provides him with some consolation and food. Adam joins Chandler on his journey to meet up with more members of colonial militias. Along the way, other colonists join the two, also ready to fight the British. Once at the pasture, Adam is greeted by Cousin Simmons and The Reverend, and is relieved that others from the Lexington militia had survived. Though the various town committees and militia have general instructions, there isn’t a single leader chosen to lead the battle.

It was a confused time for the colonists fighting and finally Chandler guides them and instructs the men waiting at the pasture to split up into groups according to the firing range of their weapons. Adam and the other men in his group lay under the brush and fire at the redcoats, Adams gun does not reach a far distance so he does not shoot but watches instead; he see the burning of Lexington and the bloodshed of the redcoats. Through the mist of all of the battle Adam seems to fall asleep leaving everyone to believe that he is wounded and dead. When Adam wakes up he finds that the battle has moved to a distant location; he hears Cousin Simmons and The Reverend talking, meets them, and they all agree to go home to Lexington, or what is left of it. Once home Adam is greeted with relief and happiness by the surviving members of his family and others from the town. Adam is now treated like a fully-grown man when he was only recently considered a simple child to everyone.

Adam makes peace with his father’s corpse, and then helps to carry the casket to the church. At the church Adam lights some extra candles so his father won’t have to rest in the dark of night. Cousin Simmons makes sure that Adam is aware this battle was only the start, and that he must consider his other responsibilities as the new head of household when deciding if he’ll continue to fight. When Adam returns home his mother is already asleep but Granny Cooper is awake and says she knows he will go back into battle eventually. He puts off the question for the time being, and is relieved to finally go to sleep and end this momentous day. The book is a great and quick read being that it is only 202 pages long. The text gets you involved and makes it feel as if you are there with Adam Cooper through the battles and his day.

You feel as if you are standing next to Adam while on the field holding your riffle awaiting the battles. The pressures and emotions that the boy is going through as he transitions into an adult are heartfelt and many people can relate to Adam in some ways. The pressure of becoming a man over night and resuming all these responsibilities he never had to deal with before is a struggle that many can relate too. I personally would definitely recommend this book to my peers as well as to younger and older audiences. This book in my opinion was very good in the fact that it drew me in and kept me wanting to read more as the story went on. I don’t usually like reading and the fact that this book makes me want to keep reading and not stop till it was finished in my opinion makes this a good book. Fast is a great author and knows how to draw in an audience. Overall this was a great book and I would definitely recommend it to all. 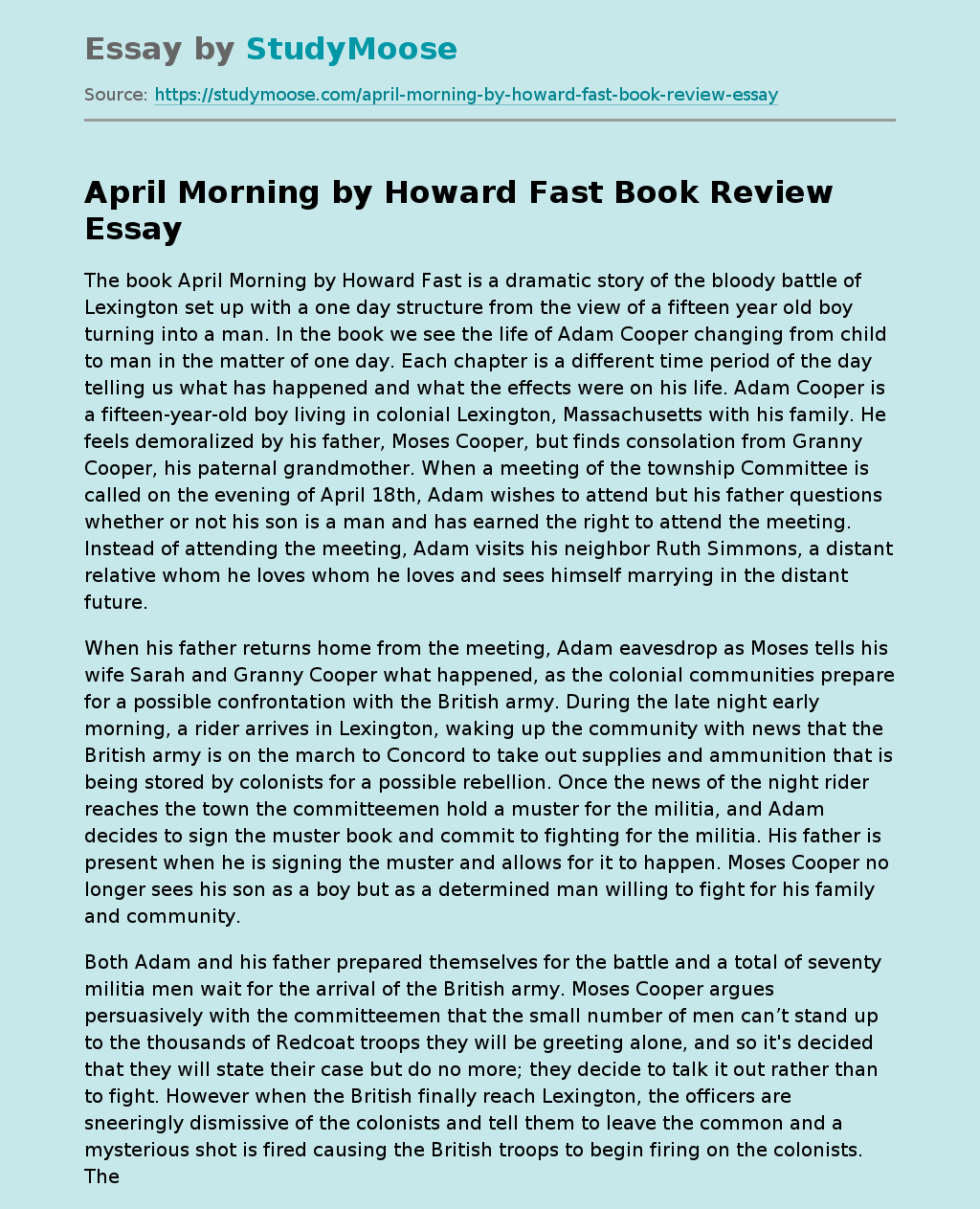