Lady Macbeth is the real villain of the play do you agree?

In ‘The Tragedy of Macbeth’, Shakespeare portrays many negative themes through the acts of Lady Macbeth which show the audience that she is a real villain of this play. She holds a malicious agenda and many evil tendencies which separate her from the average individual, but this was only after interpreting the witched prophase. Thus, not only making her the only guilty villain in the play.

Lady Macbeth is no more than an incarnation of evil. All of the acts she committed in the play were nothing else but for her selfish wants to gain power of the country and become queen.

Don't use plagiarized sources. Get your custom essay on
“ Lady Macbeth is the real villain of the play do you agree? ”
Get custom paper
NEW! smart matching with writer

Her declaration that she would have ‘dash’d the brains out’ of her own baby if she were to become queen proves of her egotistical nature and heartless conscience. When she finds out the prophecies given to Macbeth to become king, she immediately acts to create a plan to murder the innocent and respected King Duncan of Scotland.

The key elements which make Lady Macbeth a villainous human being is her inhumane conscience and lack of compassion for her victims, her deceptiveness and her manipulation.

The question of whether a person’s real state of mind is accurately reflected from there outside appearance (False appearances) is a key theme in Macbeth and Lady Macbeth is the primary culprit.

She, as well as Macbeth show deceptive traits, pretending to be good whilst planning heinous crimes; ‘Look like the innocent flower, but be the serpent under’t’: She is telling Macbeth to look innocent, but under his fake appearance he is going to murder King Duncan. This false appearance of Macbeth and Lady Macbeth is shown during the dinner feast when Macbeth is shocked to realise that Fleance had escaped and is still alive. Though this false impression exposed by Lady Macbeth had kept her innocence, her effort of burying her guilt is what had driven her mad and ultimately leading to her death; the cost of deception.

Macbeth is most responsible for the evil done in the play owing to the fact that his killing of Duncan provokes the other murders and evil in the play. Although Lady Macbeth is a part of the murders that occur in Macbeth, she is not responsible for the evil done in the play. Lady Macbeth is a very cunning, manipulative character. When she hears about the witches’ prophecy of Macbeth becoming the future king of Scotland, she immediately demands Macbeth to murder Duncan so Macbeth could become king.

Lady Macbeth successfully persuades him to kill Duncan by questioning his masculinity. Lady Macbeth puts the idea in Macbeth’s mind that he will be a coward if he does not commit the murder. After persuading him, Macbeth finally commits the murder. Thus proving that Macbeth was to weak and fragile to say no. All characters played a convincing and augmenting role which could reline the focus upon them as to who really is to blame. Macbeth was ambition and power greedy driving him to cause dyer tragedies with his wife by his side. The Witches caused nothing but trouble for Macbeth, his belief in them was so high it led to him becoming insecure. These are all the reasons and things that caused the tragic events in the story of Macbeth.

Lady Macbeth is the real villain of the play do you agree?. (2016, May 11). Retrieved from https://studymoose.com/lady-macbeth-is-the-real-villain-of-the-play-do-you-agree-essay 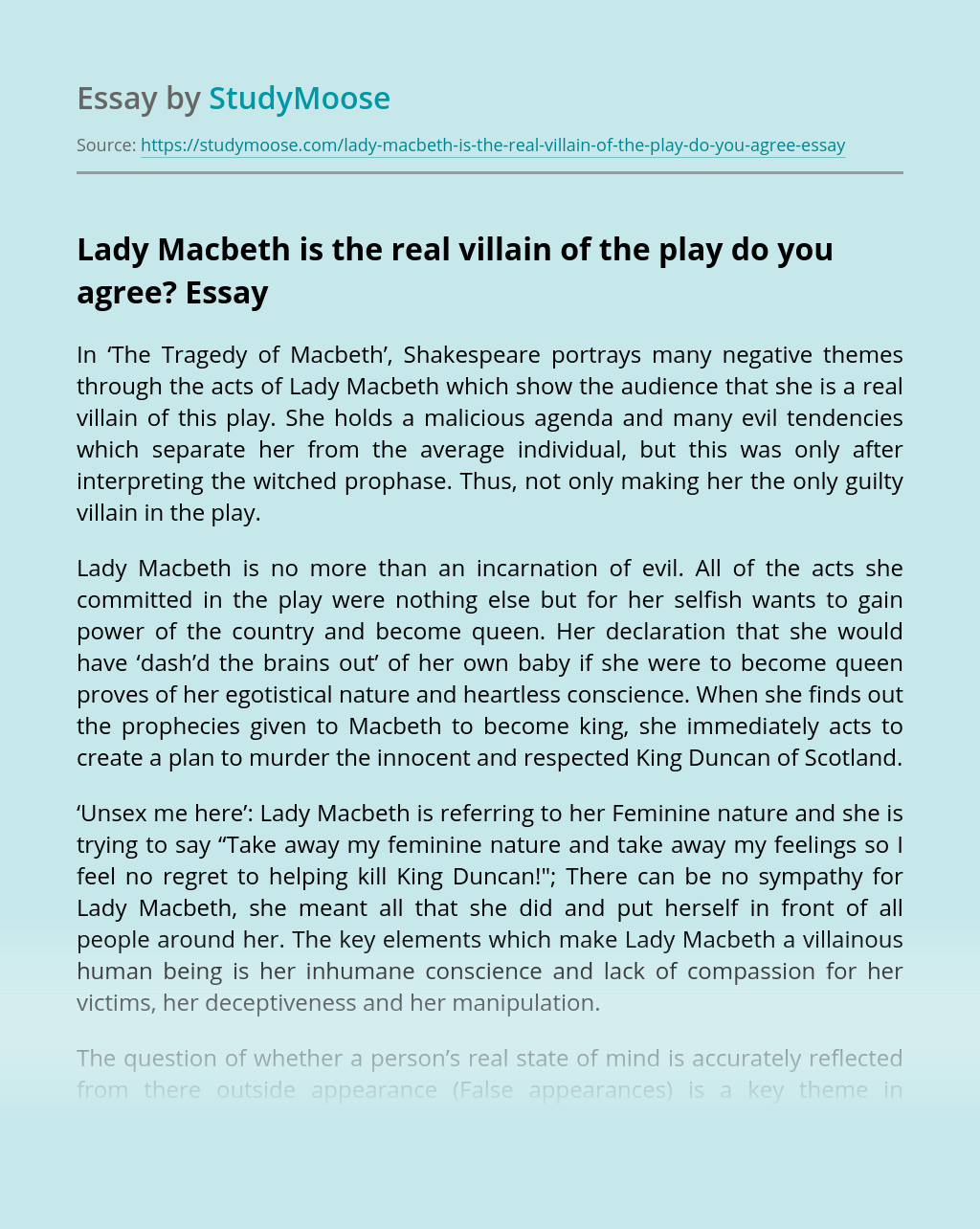