Shakespeare’s Hamlet is a play full of dishonesty and betrayal. Deception is the central theme in this play. Hamlet, in a state of emotional turmoil, deceives everyone by acting insane for a number of reasons. First, because he is deeply angry at his mother and at Ophelia. Second, because the opinions of his peers will need to be influenced. The last reason is so no one will notice he is trying to avenge his father’s murder. While some believe he fell victim, deception ultimately leads to the fulfillment of Prince Hamlet’s death wish.

Don't use plagiarized sources.
Get Your Custom Essay on Hamlet’s Deception Just from $13,9/Page

Not only is Hamlet deceptive, but so are the other characters. Horatio, Claudius, Polonius, Ophelia, Rosencrantz and Guildenstern, Fortinbras, and Laertes are all simultaneously manipulating each other as well as Hamlet.

Deception is evident in the opening act of the play. Hamlet portrays himself as someone who detests lies, corruption, and deceit. He explains that his grief is real and not simply a facade to feign his madness.

He is adamant that his feelings are genuine.

Throughout the entire play, Hamlet is manipulative, wise with his words and actions, and convinces everyone he is insane. He does these things because he is obviously grief-stricken with the news of his father’s murder and is angry at the person who did it, his uncle and his father’s murderer. He is also confused and hurt that his mother would marry his uncle, especially in such a short time after King Hamlet’s death. Not to mention he feels it is incestuous that his uncle is now his step father. He refers to his mother as the “good mother,” or step mother. He lies about his mental state to refrain from arousing suspicion and to create a distraction. While Hamlet gathers evidence against Claudius, he reveals to Horatio his plan to feign insanity:

Here, as before, never, so help you mercy,
How strange or odd soe’er I bear myself,
As I, perchance, hereafter shall think meet
To put an antic disposition on,
That you, at such times seeing me, never shall,
With arms encumber’d thus, or this head-shake,
Or by pronouncing of some doubtful phrase,
As ‘Well, well, we know’; or ‘We could, an if we would’;
Or ‘If we list to speak’; or ‘There be, an if they might’;
Or such ambiguous giving out, to note
That you know aught of me: this is not to do,
So grace and mercy at your most need help you.
(187-199)

Hamlet tells this to Horatio in confidence. He tells him nothing specific, but he does let him in on the fact that he’s trying to deceive everyone so they won’t know he’s trying to gather evidence against Claudius. Horatio swore his allegiance to Hamlet. A rational person would not be able to exlpain this to someone. He understands every situation and knows there will be consequences for his actions. These reasons further prove that Hamlet was being deceitful.

When Hamlet meets his mother, Gertrude, in her chamber, his plan is to “speak daggers” to her for what she has done, but has no intention of being physically violent. If Hamlet were actually insane, he would have murdered his mother without a second thought. Irrational people cannot control their actions. They do not know right from wrong. Gertrude blames Hamlet’s behavior on the fact that he is obviously insane and feels a great amount of pity for him.

An act of deception takes place when Hamlet stages the murder of Gonzago in the re-enactment of the Mousetrap play at the suggestion of the ghost. This re-enactment is to try to manipulate Claudius into feeling guilty about murdering the king. It worked. Claudius did feel guilty. This was a signal to Hamlet, but he unfortunately did not act immediately to avenge his father’s murder.

In one of the events he concocted to discover the truth, Hamlet unknowingly kills Polonius, thinking it was Claudius. Because of Polonius’ death, Claudius is now afraid of Hamlet. Losing her father at the hands of her lover caused Ophelia to go mad. It only made Laertes seek revenge.

Because of Hamlet murdering Polonius, he is exiled to England. I believe it was more so for Claudius’ safety than an actual punishment. Rosencrantz and Guildenstern accompany Hamlet to make sure he arrives where he’s supposed to. King Claudius ordered Hamlet’s death, but he does not know it. Hamlet is being deceived until he figures it out and turns the tables. He switched his name on the death warrant with Rosencrantz and Guildenstern’s name. They die in his place.

Without deception, the plot would be at a standstill. Hamlet would not have his “antic disposition.” Claudius would be a flat character. Hamlet’s “to be or not to be” soliloquoy probably would not exist. If Hamlet had killed Claudius without debating it and weighing the pros and cons, I would not have enjoyed this play.

Ultimately, deceit caused many unnecessary deaths. Polonius should not have died, but did because of a simple mistake. Rosencrantz and Guildenstern died because of Hamlet’s trickery. Ophelia kills herself because she cannot live with the dilemma of making everyone else unhappy. I am sure Hamlet telling Ophelia he never loved her (even though he did) also played a huge part in her suicide. Gertrude and Laertes unknowingly drink the poisoned wine that was meant for Hamlet. Claudius dies because he was stabbed by Hamlet with a poisonous sword. And finally, Hamlet dies because Laertes stabs him with a blade that has also been poisoned.

Throughout Hamlet’s emotional turmoil, he remained sane. Outside forces influenced his behavior. His father’s murder set up a domino effect for Hamlet to lie, betray, and become filled with murderous rage. Hamlet got his revenge by killing Claudius, which is what he set out to do, but it came with a price. Hamlet fell victim to the deception he created. 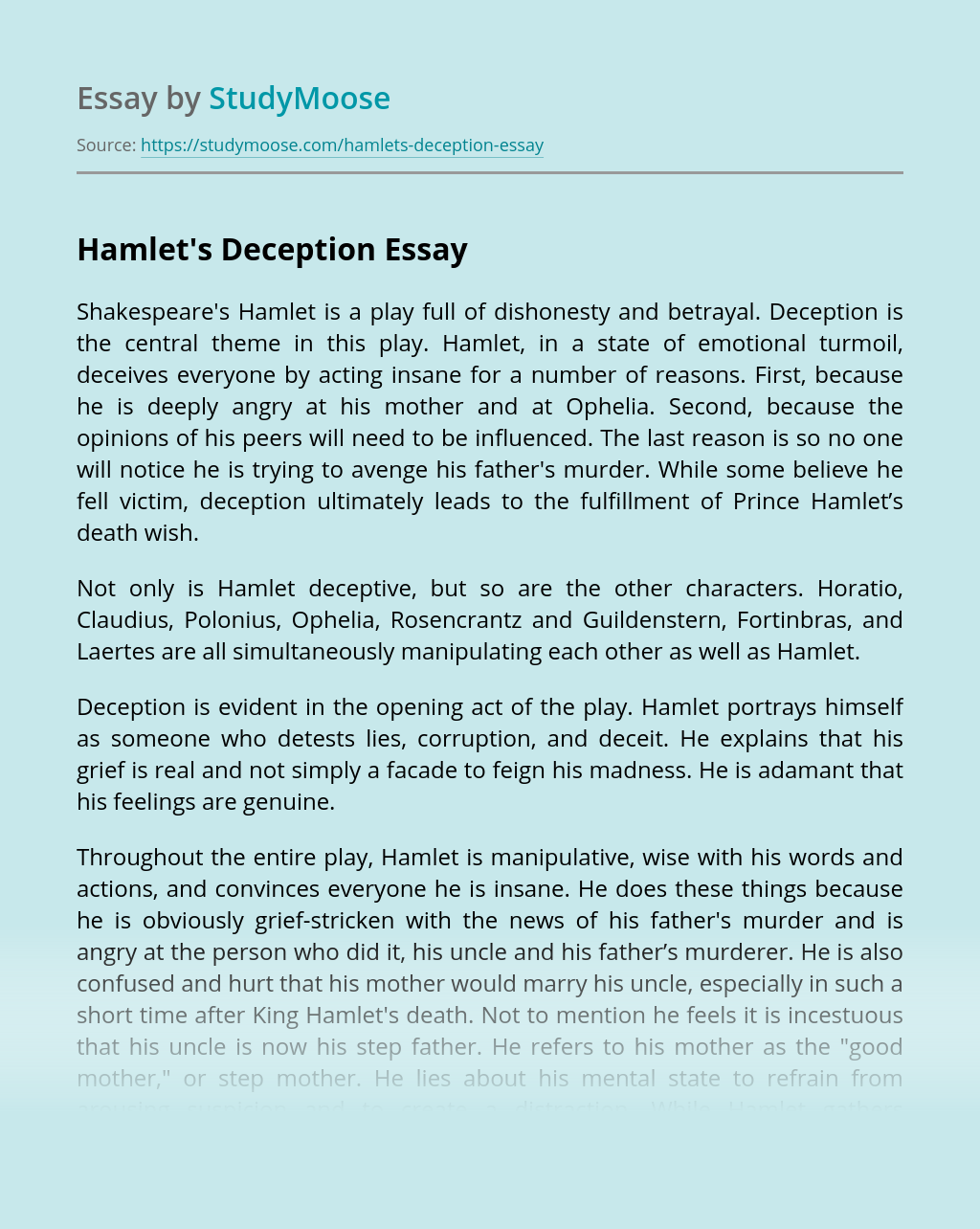 Importance of Minor Characters in Shakespear

In the main plot of Shakespeare’s famous play Hamlet, Hamlet’s father, the king, is murdered, and as a result, Hamlet swears revenge and ultimately succumbs to madness. Hamlet plays the role of the protagonist, while his uncle, Claudius, serves as the antagonist of the story. Besides the two main characters, there are a number of...

Get Essay
How far is Hamlet dominated by a Christian worldview?

England during the 17th century was a Christian society and country. All Children would most certainly have been baptised shortly after birth and once at a suitable age capable of understanding religion would be taught the essentials of Christian faith. Attendance at church was compulsory; failure to do so without a good medical reason or...

Hamlet has been known as one of the greatest of Shakespeare’s plays. This is mainly because the protagonist has confused scholarly minds for centuries on end with his complex personality and muddled thoughts, which in turn leads onto his actions, or rather inaction. His incomprehensibility by many leads me only to conclude that he is...