Ambition is the strong desire to perform an action to achieve something whether it’s for a good cause or to satisfy one’s need or desire. Macbeth, written by William Shakespeare, describes the derivation and ascension of power by Macbeth and Lady Macbeth as well as the problems associated with it. The great ambition characterized by both Macbeth and Lady Macbeth provokes the characters to perform actions in the desire for power. The overarching theme of the play is “fair is foul and foul is fair” in which every action has consequences associated with them.

Don't use plagiarized sources. Get your custom essay on
“ William Shakespeare’s Macbeth: Impact of Ambition ”
Get custom paper
NEW! smart matching with writer

Ambition impacts Macbeth and Lady Macbeth as Shakespeare portrays that the forces of ambition cause strike that ultimately leads to the conduct of evil. Ambition describes the insolent pride and the violation of gender roles that destroys the standards and morals in order to satisfy one’s need or desire.

Ambition causes the violation of gender roles that destroys the morals of other characters. Women are usually portrayed as weaker than mean but Lady Macbeth destroys such limitations as her driving ambition ultimately awakens the evil ambitions within Macbeth.

When Macbeth consults to Lady Macbeth of the witch’s prophecy, Lady Macbeth immediately strikes the opportunity, not leaving it to fate or chance. She explains to herself, “Glamis thou art, and Cawdor, and shalt be / What thou art promised. Yet do I fear thy nature; ‘ It is too full o’ th’ milk of human kindness… Thus thou must do” (1.5.15-25). The implication of the quote explains the impatience of Lady Macbeth and that Macbeth must do what is expected of him.

Lady Macbeth’s desire for power drives her to chide Macbeth’s manhood. Lady Macbeth whose power is supposed to be less than that of Macbeth shows great dominance over Macbeth which violates typical gender stereotypes. The violation ultimately destroys the morals of Macbeth as her dominance leads to the awakening of Macbeth’s evil and causes the necessity to do everything to gain power in order to satisfy one’s need. In addition to the questioning of Macbeth’s manhood, another instance in which Lady Macbeth violates typical gender stereotypes is during the feast in which Lady Macbeth talks about all of Macbeth’s flaws. “Are you a man? / O, proper stuff! / This is the very painting of your fear / This is the air-drawn dagger which / Led you to Duncan. O, these flaws and starts” (3.4.70-76). Lady Macbeth asserts dominance, but her speech to Duncan also solidifies Duncan’s personalities and moral as a dynamic character to do whatever is necessary to keep his position as king. Duncan, whose emotions are yet to be solved, is now set in place after having his manhood questioned numerously. Lady Macbeth’s power and dominance as a female played a huge role in the characterization of Duncan throughout the play. Both quotes connect to the overarching theme as the result of Lady Macbeth’s impatience and aspiration leads to the development of a dynamic character in Duncan as the results of Lady Macbeth’s provocation causes Duncan to be eviler and destroys morals in order to gain power. “Fair is Foul and Foul is Fair” was displayed as the main character’s ambition causes them to destroy their social standards and relationships between themselves and others. They start to isolate and so the result of ambition is isolation and conducting cruelty on others. In conclusion, ambition causes the violation of certain gender stereotypes that violates certain morals of other characters.

Having solidified the characterization, ambition also causes insolent pride that causes the destruction of morals in characters. Macbeth, whose presence seems innocent in the beginning of the play, begins to be more prideful and wicked after gaining power. Having experienced this, Macbeth describes, “Oh, full of scorpions is my mind, dear wife! / Thou know’st that Banquo, and his Fleance, lives. / Scarf up the tender eye of pitiful day / And with thy bloody and invisible hand / Cancel and tear to pieces that great bond” (3.2.41-42-55). Having assumed as king, Macbeth whose intention is to protect his life and keep his position as king fears the loss of position to Banquo. Macbeth’s power causes him to seek evil in order to not only assert dominance as king but also gain more power as it shows that he is willing to do anything to keep his power. His ambition and desire for power cause him to gain a sense of pride which causes the destruction of morals in himself such as the killing of his best friend. In addition to the killing of his best friend, towards the end where Malcolm is about to confront Macbeth, Macbeth’s power causes him to be fearless and assures himself he will win against Malcolm. As a result his ignorance causes him to say, “What’s the boy Malcolm? / Was he not born of a woman? The spirits that know / All mortal consequences have pronounced me thus: / ‘Fear not, Macbeth. No man that’s born of woman / Shall e’er have power upon thee’” (5.3.3-7). This ambition for power causes a senseless pride as Macbeth is not scared of anyone, especially in war. It causes the destruction of morals in the sense that he isn’t afraid of killing as he has killed many times in order to satisfy his ambition or desire. Macbeth’s pride causes him to lose standards but it also shows that he is a dynamic character. Both quotes contribute to the thematic significance as Macbeth’s power and pride ultimately led to his downfall and that his actions such as killings led to his death. These quotes are significant because the theme’s significance and the real world as it gives expands the typical stereotypes of people and allows for new views of people and the new distribution of knowledge and power. Therefore, ambition creates pride and ego that causes characters to lose standards and morals.

In conclusion, both Macbeth and Lady Macbeth embody the definition in which ambition violates gender roles and creates pride that causes the loss of standards in character. Lady Macbeth’s ambition for power and displacement of her dominance over Macbeth provokes all his evil doing and as a result, creates pride that leads to a loss of morals in Macbeth. The play connects back to the real world and that people who are ambitious and start to gain power and dominance tend to stray away from society and almost changed their whole personality. This is present in modern-day society in which people who find themselves to be more powerful, view themselves as more superior and that the people are inferior to them which connects back to Macbeth and how his ambitions change his personality and social life. Thus, the Scottish Play explores ambition and its effect on both the play and in real-life scenarios. 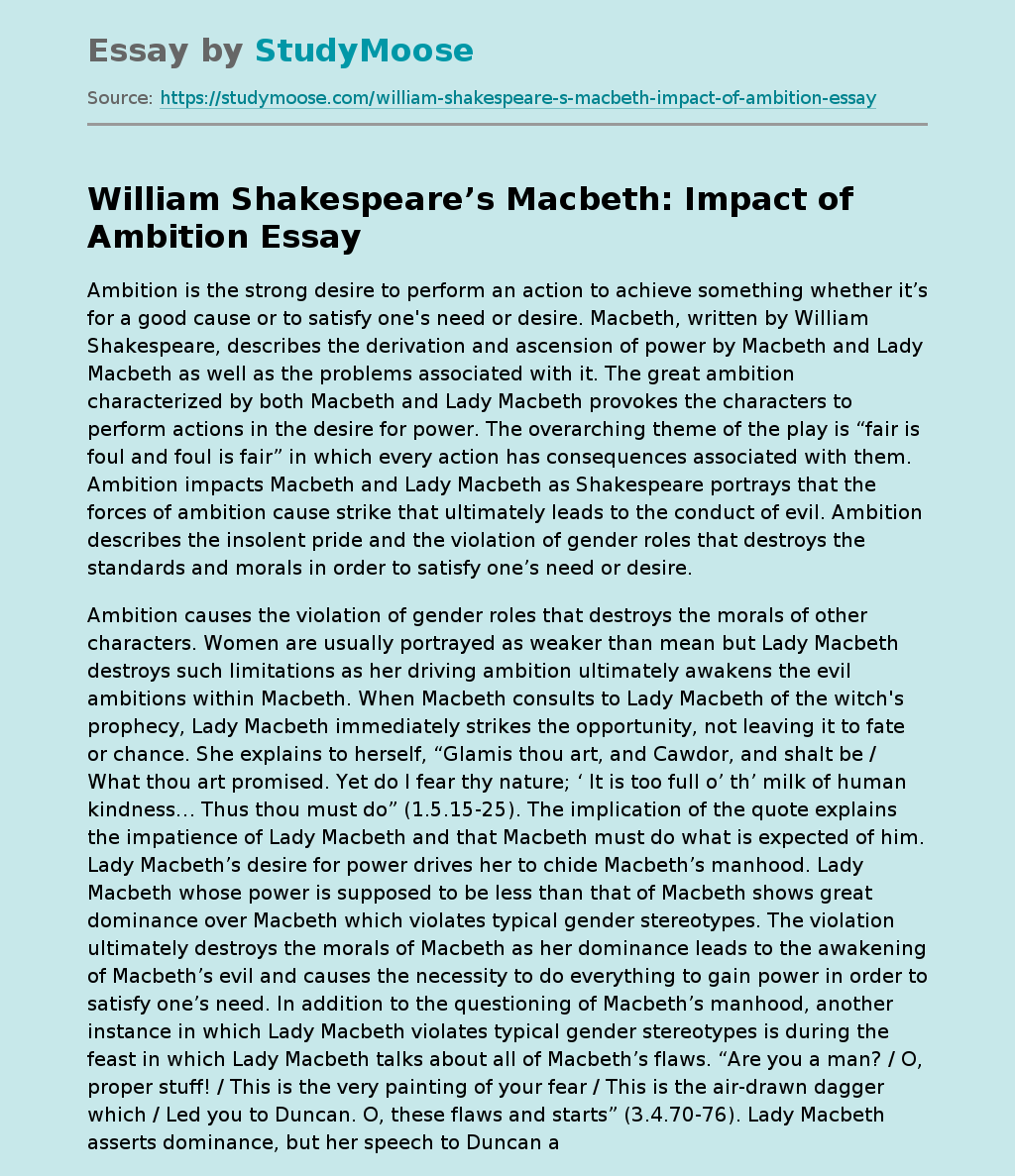