The Negative Consequences of Ambition in Macbeth

Having too much ambition causes people to make destructive choices. “For brave Macbeth-well he deserves that name-Destined fortune, with his brandished steel/ Which smoked with bloody execution,/ Like valor’s minion, carved out his passage Till he faced the slave” (Shakespeare 1.2.16-20). At the beginning of the play, King Duncan rewards Macbeth for his accomplished and noble deeds.

At this point, Macbeth’s character becomes someone who is determined to honor king Duncan and do what is to be done. By obeying, he now becomes the King of Cawdor.

Don't use plagiarized sources. Get your custom essay on
“ The Negative Consequences of Ambition in Macbeth ”
Get custom paper
NEW! smart matching with writer

However, not all conditions of ambition are the same. “That I require a clearness. And with him,/ To leave no rubs nor botches in a work,/ Fleance, his son, that keeps him company,/ Whose absence is no less material to me/ Than is his father’s” (3.1.134-138). Macbeth is willing to do anything to reign as king as long as he can. In order for this to happen, he hires a murderer to kill Banquo and his son, Fleance.

Proficient in: Ambition In Life

He wishes for more things to be done for him and does not care about the perception of others. As compared to the beginning and until the end of the play, ambition does not just stand for determination or kindness, it can symbolize as destruction.

2.48-50). The three witches are explaining to Macbeth that he will become the next king of Scotland. Macbeth at first does not believe the witches. Although when they tell him he becomes Thane of Glamis and Cawdor, he starts to believe and reason with them, because he’s currently the Thane of Cawdor. He did not accept the truth until the end, because he thought the witches were very odd, and not from this earth.

Not only do the witches deceive people, but Macbeth does also. “This castle hath a pleasant seat. The air/ Nimbly and sweetly recommends itself/ Unto our gentle senses” (1.6.1-3). When entering the castle of Macbeth, Duncan feels comfortable and feels like he belongs there. Little does Duncan know what is about to happen to him. Duncan still completely trusts Macbeth 100%. Never underestimate anything or anyone by the way they look or act. There could always persist of an unexpected outcome.

The Negative Consequences of Ambition in Macbeth. (2021, Dec 02). Retrieved from http://studymoose.com/the-negative-consequences-of-ambition-in-macbeth-essay 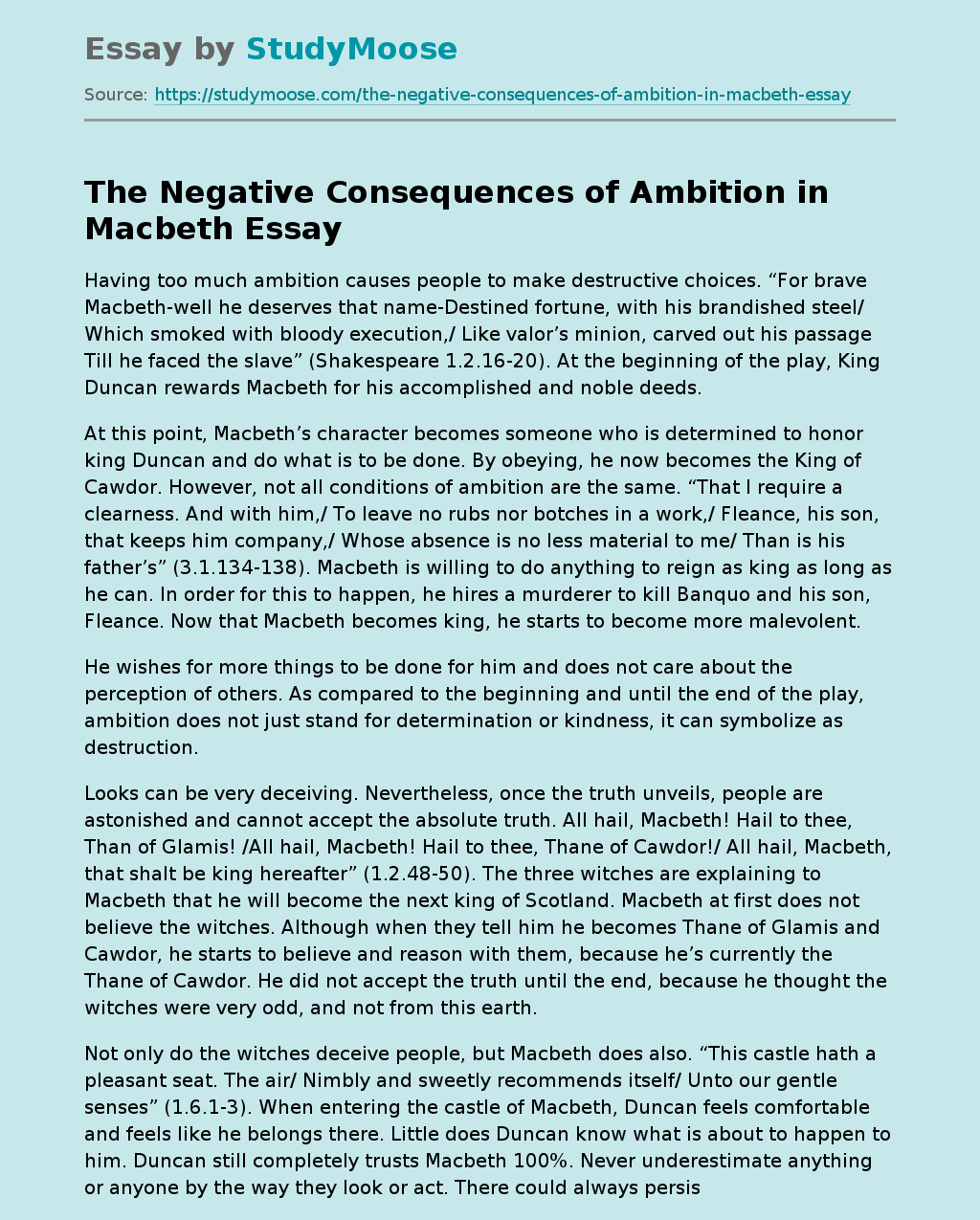