What prevents Macbeth from being nothing more than the story of a ruthless and ambitious murderer?

Macbeth, written by William Shakespeare, is the story of an initially good character who is corrupted by the events and characters surrounding him. Through this influence, his personae changes, he becomes more and more ruthless, resulting in his demise and at last tragic end. Therefore, Macbeth can be identified as a tragic hero. Certainly there is a flaw in Macbeth’s character, a weakness. This, when combined with the three witches’ prophecies and Lady Macbeth’s ambition, leads him to compromise his honor and negate moral responsibility on his way to attain power.

Don't use plagiarized sources. Get your custom essay on
“ What prevents Macbeth from being nothing more than the story of a ruthless and ambitious murderer? ”
Get custom paper
NEW! smart matching with writer

Only in his downfall he realizes his flaw but is unable to prevent the tragedy.

The witches can be seen as pure evil trying to corrupt Macbeth. They know what Macbeth’s fate is and make the plan to meet him right in the beginning of the play. The statement

“Fair is foul, and foul is fair”

reiterates throughout the play. This could mean that what is good shall turn to bad and what is bad shall become good.

This links to Macbeth’s development. From being a brave and loyal subject to the king, he changes into a character that is ruthless and morally corrupted, not at least due to the actions of the three weird sisters.

Macbeth shows great allegiance to Scotland and King Duncan in the beginning of the play. Duncan learns through a wounded captain, who also fought in the war, that Macbeth has shown great bravery in the battle with Macdonwald and the Norwegian army and that only by this, victory could be achieved.

Afterwards the king of Scotland regards Macbeth as trustworthy and proves this by awarding him with the title of Thane of Cawdor. From the outside Macbeth also is seen as a very honorable man, showing how good his character is before being infiltrated with ambitions by the witches.

Already when Macbeth meets the king, the witches have unraveled his future to him and Banquo. Their prophecies are targeted directly at his strong ambitions and the witches, belonging to a higher power, know this. At first, Macbeth naturally believes they are not telling the truth and Banquo rightly sees that they

They greet Macbeth with three titles, Thane of Glamis – which he is -, Thane of Cawdor – which he shall soon find out he would become – and as the king. Macbeth thinks that this

“Stands out of prospect of belief”

However, when he finds out that the greeting as Thane of Cawdor proves to be right, as Ross delivers the message that he has been honored with this title, his mental process commences. The witches have proved themselves to be trustworthy and at the same time sparked off Macbeth’s ambitions. From now on he sees the possibility of becoming king in his inner eye but does not yet have the confidence to do what it takes. Even though Macbeth’s own ambition drives him to his mental process, he would never have considered or even dared to consider anything like becoming king without the witches interfering in the natural order of things.

When Macbeth arrives at the Forres, the king’s palace, he hails Duncan with much respect. Even though it seems as if Macbeth is not truly standing behind his words, he still honors the king and to a certain extent looks up to him. Only when the king announces Malcolm as his successor, his ambitions shine through. Just before the witches told him that he shall be king, now this is contradictory. Inside he desires what he has been promised by the witches. However, he tries to hide these desires from the “light”, as he wishes

“Let not light see my black and deep desires”

Now one can clearly see that his once relatively pure mind has been tainted by the witches’ dark influence.

When Macbeth arrives back in his castle, Inverness, his wife has already read his letter telling of the previous events. She has given thought to the witches’ prophecies and comes up with a plan to kill the king when he would stay in their castle. Seemingly she is a very ruthless character driven by her ambition. Having the power within her grasp, she would do anything to reach it. After the King has arrived Macbeth changes his mind, he thinks of the King very highly, as he has just recently honored him and says to his wife:

” We will proceed no further in this business:

He hath honoured of late, and I have bought

Golden opinions from all sorts of people”

These honors and “Golden opinions”

“would be worn in their newest gloss”

and as he thinks should

“not be cast aside so soon”

In addition, he fears what would happen if they failed. Lady Macbeth however does not accept his fears, questions his manhood and casts all his doubts aside. By this appeal she reaches her goal and finally makes him agree,

“I am settled, and bend up”

Macbeth, even though his chance has been revealed to him, still has doubts regarding his own safety (“If we should fail”), but honestly regards the king as an honorable man, who should not be killed. He sees evidence that the king is still of mankind and not a beast as Lady Macbeth describes him. Only through Lady Macbeth’s attack on his manhood he at last agrees.

A certain turn occurs in Macbeth’s character from then on. Clearly he becomes more and more ruthless now, no longer fears what might happen and at first has not much regret for what he does. His ruthlessness can be explained by the fact that after having committed regicide, of a king that was rightfully in his place, there is nothing much worse a person could do at the time. In addition to that he now only wants to secure his position and fears what would happen if he was to lose this. After having killed the king and being crowned he also fears the prophecy the witches have given him and he decides to hire murderers to kill Banquo. The witches have, with these prophecies, not only targeted at his ambition but also have given him the facts he, allegedly, needs to secure his position. All of this of course does not solve him of the guilt but some of it can be transferred to the witches.

After having killed Banquo, too, Macbeth sees his ghost appear at the Banquet. He overreacts to this apparition somewhat revealing his guilt to his guests at the Banquet even though they cannot see the ghost. The ghost seems to be a revelation of the kind of mental state he is in. Subconsciously he seems to be feeling guilty and this becomes apparent through the ghost. However, he still doesn’t feel safe because he realizes the absence of Macduff at the Banquet. This is why he decides to ask the witches to reveal his future to him once more. Especially that he should be aware of Macduff strikes out to him and once more he acts on the witches’ prophecies and sends murderers to kill Macduff’s family. This is probably the most coldblooded act he commits throughout the play. By now he is so interwoven into killing that he does not see any other way but carrying through what the witches indicate. Since the regicide there is no way for him to turn back.

Macbeth now indulges in a false feeling of security, he believes and trusts in the witches’ prophecies completely but has become isolated from everything around him. The only ones he has contact with at this point are his servants. His wife has gone insane over the guilt, which she thought would be as easy to wash away as blood from the hands. Malcolm and his followers, Macduff included, have launched an attack on Macbeth’s castle. Shortly before the battle, Macbeth is informed about Macbeth’s death and he sadly thinks about life comparing it to badly acted play, somewhat showing that he has given up real life because he no longer has anything to lose. He still, however, believes in the witches and thinks he is invulnerable to everyone born from a woman. Fighting Macduff he realizes that what the witches foretold him were half-truths only. This, however does not help him and he is at last killed. The last scenes show how deeply he believed in the witches’ prophecies. Even after having lost everything, he does not realize that they did not tell him the whole picture. Only shortly before his death he comes to the conclusion that this must be so.

Macbeth develops from being an honest, well respected individual to become an inhumane “fiend”. However, the fault lies not completely on his part. The witches kindle Macbeth’s ambition for kingship and quell his reasoning making him vulnerable to intimidation and seduction in the form of Lady Macbeth. He is in many ways only a tool through which the witches can reach their goals of disruption and disturbance of the natural order of things. After this, Lady Macbeth, who is also led by ambition to change Macbeth around completely. Macbeth carries the flaw that at last leads to his downfall. His ambition and to a certain degree naivety make him the man as which he dies. Only at last, when he is completely isolated and about to die he realizes his mistake in following the witches’ advice. Thus he is the classic model for a tragic hero.

What prevents Macbeth from being nothing more than the story of a ruthless and ambitious murderer?. (2020, Jun 02). Retrieved from https://studymoose.com/prevents-macbeth-nothing-story-ruthless-ambitious-murderer-new-essay 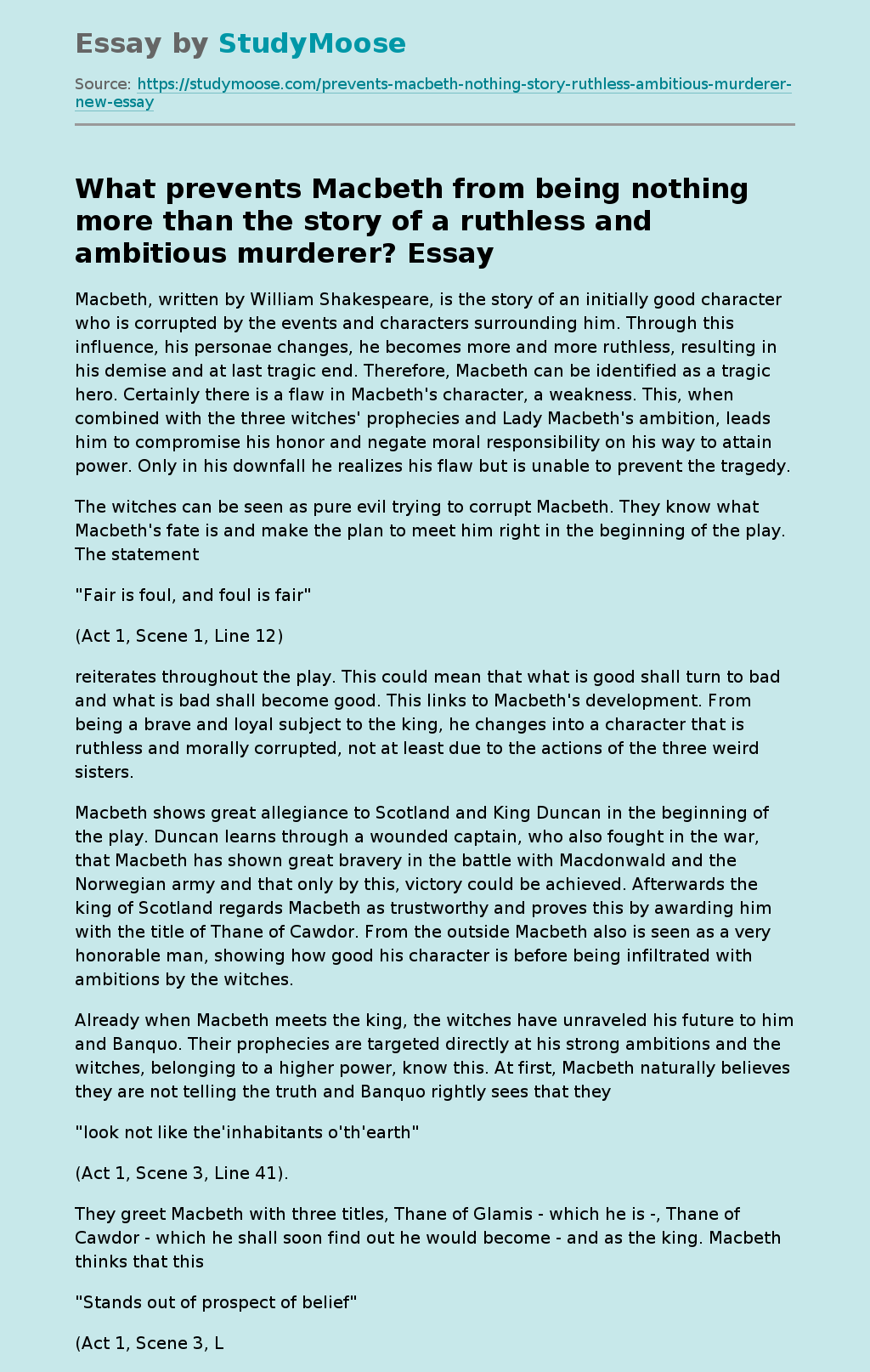