Religious Change Over Time in Latin America and Caribbean

Throughout the years of 1450 to present, the religion of Latin America and the Caribbean went through a number of changes. Although the religious beliefs and practices of these areas were mostly animistic prior to 1450, they proved to be flexible and went through many alterations get to where they are today. Prior to the arrival of the Spanish Conquistadors, the Latin American people had never heard of Catholocism, which would eventually become a dominant religion.

In the early centuries of Latin America, the religion was polytheistic.

The people known as Aztecs, who lived in towns located along rivers, built sacred temples to honor their many gods. They worshiped at least 128 deities in total, including Tlaloc, the god of rain. Little distinction was made between the world of the gods and the natural world. The temples, some of which still stand today, were made of earth and/or large burial mounds. The burials included art such as pottery, paintings, and carvings and were often accompanied by rituals.

These rituals contained human sacrifice, cannibalism, and executions. In the period after militarism, human sacrifice became much more prominent than before. It has been questioned whether the reason for the sacrifice was actually the result of religious conviction, or simply done as a tactic of terror towards rulers and priests. Aztec people had known nothing other than this lifestyle for centuries until a new culture made its way to their land.

In 1492, Spanish Conquistadors such as Hernan Cortes sailed to the coast of Latin America, bringing their religious views along with them.

Cortes and his army of 600 conquered the land, destroying precious temples in the process. They pulled down all the polytheistic idols, rearranging their stone to replace them with Christian architecture such as Catholic cathedrals. In this time period, art and architecture were prominent and intended to serve the glory of God. Dominican friar Bartolome de Las Casas replaced the Aztec’s long-practiced human sacrifice with Catholic mass. In addition to the conquistadors, there was another group called the Jesuits who sought new followers of their religion.

The Jesuits offered special privileges to those who converted to Catholicism, while the Spanish convinced the people that their Catholic God would provide protection from diseases and harm. Although the majority of the people were won over by Catholicism, some chose to remain isolated and continued to practice polytheism. Regardless, all Aztec people remained devoted to their religion. Meanwhile in the Caribbean, Spanish and Italian merchants began to import African slaves to work on the few sugar plantations that operated on the islands. These slaves brought a mixture of religious beliefs along with them, their own pagan views mixing with Christianity.

In both present day Latin America and Caribbean, Catholicism is the dominant religion. In modern day Caribbean, the small non- Catholic population consists of various forms of Christianity that were formed with the arrival of African slaves. One of these other religions is Rastafarianism. This is a form of Christianity with a distinct Caribbean style. It uses the Bible as its main text, but interprets it much differently than the more traditional Christian sects. On the other hand, the Latin American non-Catholic population consists of a small group of people who were not converted by the Conquistadors and chose to remain animistic. Throughout all the changing, some Latin Americans have had the same animistic beliefs despite what’s been going on around them. The Latin American people always have and always will be devoted to their religion, as we can tell by the great pyramids mounds they built that are still standing today.

Prior to 1450, religious beliefs and practices in Latin America were polytheistic and included human sacrifice. When the Spanish Conquistadors and Jesuits came to the area, Catholicism was introduced and began to spread rapidly. Now, in present day Latin America and Caribbean, it is impossible to avoid Catholicism. It has become the major, dominant religion of the area and its followers are as devoted as ever.

In addition to the large Catholic population, there continues to be a mixture of religions and practices of polytheism and voodoo throughout the area. Societies change for a number of reasons, one being foreign influence. If it wasn’t for the missionaries coming into the Latin American and Caribbean society, the people would most likely have remained polytheistic forever, because there would be nothing new introduced. For these reasons, religion in Latin America and Caribbean has changed drastically from its early years, while also staying the same in some ways.

Religious Change Over Time in Latin America and Caribbean. (2016, Dec 30). Retrieved from https://studymoose.com/religious-change-over-time-in-latin-america-and-caribbean-essay 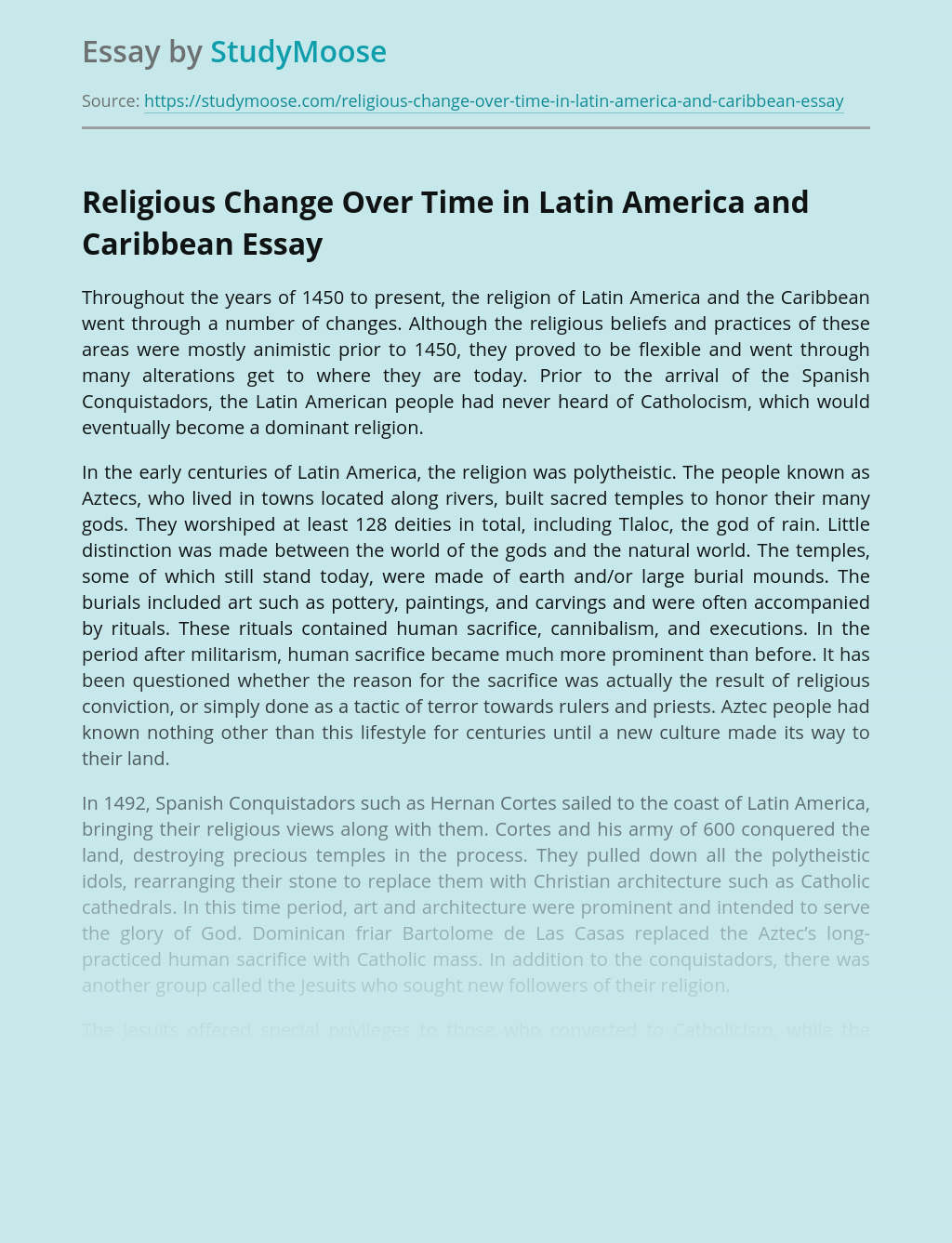 Artist like any other human been, are trying to understand, and explain the world to others, and to themselves, they use their experiences, and imagination, in order to make sense of the world , tangible, or intangible, to do this the artist assume four roles, Henry M. Sayre in his book “A World of Art”...

The period between 1500 to 1900 also refers to the time period from the Middle Ages to the modern world. The period witnessed significant strides in state building in England, France, and Spain, where growing bureaucracies levied taxes to finance large-scale warfare and territorial expansion. At the same time encroachment on the longstanding powers of...

Get Essay
Change over Time: Christianity's Impact on Europe

Change Over Time: Christianitys Impact on Europe Christianity had spread its influence widely over the Mediterranean well before 1500. Many of the world’s major religions rose during the same time as Christianity, but Christianity didn’t stand out during those times. There were other religions such as Islam and Hinduism that were uniting their people more...

Since the fall of the Roman Empire, Europe had slowly moved into a sense of intellectual and artistic decline where very few possessed the ability to read and write. During his 46-year reign, Charlemagne was determined to have educated clergy and lay men who were able to tend to the administration of the empire. The...

Mr. Chairman, Honorable Proprietor and Headmaster, Mr. Commissioner distinguished staff members, co-aspirants, fellow students, ladies and gentlemen, I greet you all It has been observed by me in recent times, that there are many problems, which arise day in day out. I do not wish to make this entire problem known, because they give me...

Outcome based practice refers to the actual impacts, effects and or end results of services / interventions on an individual’s life. Its effectiveness is not measured by numbers/figures or financial strategies it is measured by the positive outcome that is achieved. It isn’t about what is required to be done but what is actually achieved...

1 The latest Changes done to Film in Recent Time

1. The latest Changes done to Film in Recent Time It is believed that the changes we see is how we are dealing with the Negative aspects in stories. People have become little more relaxed these days, because cinemas as a medium has become has become completely nuanced and highly sophisticated. It’s due to the...

Markov chain Monte Carlo calculations that are versatile have

Markov chain Monte Carlo calculations that are versatile have been considered for quite a while yet impressive hypothesis was normally required to demonstrate stationarity of the subsequent Markov chains. All the more as of late, the improvement of rearranged criteria for affirming hypothetical intermingling of proposed calculations has prompted a blast of new versatile MCMC...