Civilization of Aztecs and Tainos Comparison

One of the principle duties of the cacique was to organize the harvest for his tribe. The chieftain was in charge of determining the best places to plant the crops. All caciques had the right to clear land if they wished to grow produce at a given spot. He was also in charge of deciding when to plant and when to harvest the fields.

Construction was an important part of life for primitive tribes in the Caribbean, and caciques were essentially the foremen.

Turn in your highest-quality paper
Get a qualified writer to help you with
“ Civilization of Aztecs and Tainos Comparison ”
Get high-quality paper
NEW! AI matching with writer

A cacique had to delegate tasks to his people. Some were instructed to build huts, places of worship or fortifications. Others were tasked to build canoes, utensils, weapons and tools.

Caciques were polygamous. They had multiple wives to tend to all their needs. Much like some of the political marriages in European history, these tribal leaders often married the daughters of other chieftains to form alliances and bring about peace between tribes.

One of the most common ways to gain an ally was to pay a suitable dowry in order to marry the favourite daughter of another cacique.

Another responsibility held by the cacique was the administration and hosting of most religious ceremonies as well as many festivals. The indigenous people in the Caribbean and Latin America were spiritually oriented, and the cacique was in charge of conducting ceremonies in honour of the gods and nature. These chieftains also hosted regular events to celebrate yearly festivals such as summer solstice and the first day of harvest.

The cacique was expected to lead and act as a spiritual representative.

One last duty of a cacique was to judge his people. Members of the community followed basic laws pertaining to theft, murder and infidelity. The cacique had to decide what punishments were suitable for certain crimes, and to sentence the perpetrators after a period of deliberation. For instance, Arawak chieftains often sentenced thieves to death by impalement. Tributes were paid to the cacique in gold and maize.

Functions of the Aztec King: A Militaristic Leader

The Taínos settled together in relatively small communities spread out across the Caribbean archipelago adding up to approximately 6 million Taínos. Each had its own similar governmental system. The Taino communities were independent of one another. The composition of the Taino society and political structure and endeavours reflected a very simple, corporative and community centred society. They strived to sustain their small villages and made little to no effort to expand territory or spread their political influence. The Aztecs on the other hand over time evolved into a great empire stretching from according to John P Schmal the Pacific Ocean to the Gulf coast and from Central Mexico to present-day Republic of Guatemala. By 1449 that single empire housed 15 million people. With such a vast amount of land and huge numbers of people to govern the Aztec political system was far more complex than that of the Taínos. They sought to expand their empire and increase their scope of influence.

For both the Taínos and the Aztecs religion was an integral part of their lives. Though the Aztecs had far more gods than the Taínos, the gods in each society were at the head of the political chain. They rulers and priests of the Taino and Aztec societies would communicate with the gods and receive specific instructions in all areas of life. The emperors and rulers could generally be seen as executers to the will of the different gods and as pacifiers to satisfy the desires of the gods. This responsibility influenced their political decisions. This can be seen as one drive behind the rapid expansion of the Aztec empire was the need to acquire more tribute for the gods.

Civilization of Aztecs and Tainos Comparison. (2016, Sep 28). Retrieved from https://studymoose.com/civilization-of-aztecs-and-tainos-comparison-essay 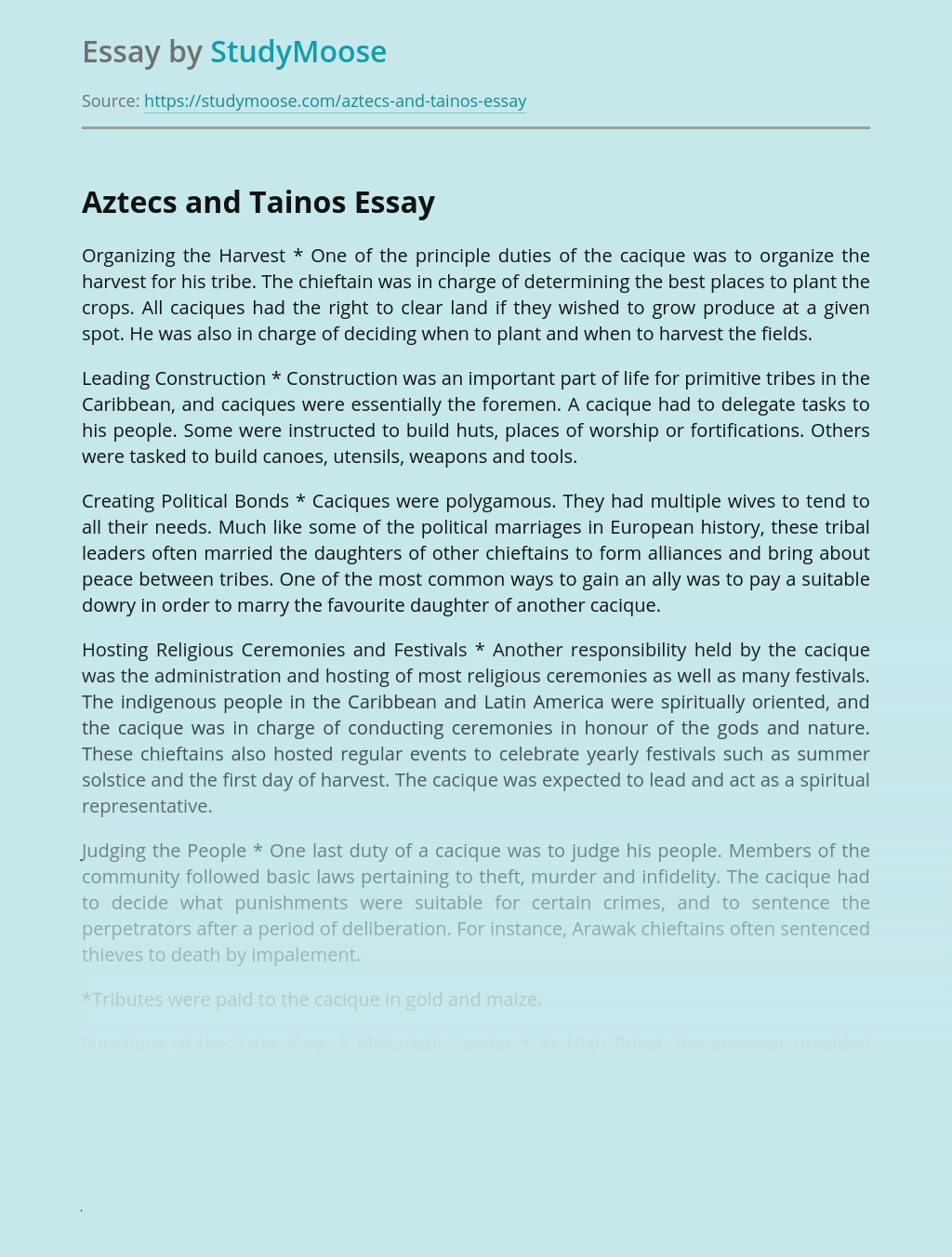 Turn in your highest-quality paper
Get a qualified writer to help you with
“ Civilization of Aztecs and Tainos Comparison ”
Get high-quality paper
Helping students since 2015
Stay Safe, Stay Original