Do you support that Public accountability an erosion under the current mode of governance and market-oriented reforms? Why or why not? Elaborate your answer with examples on operationalization of public accountability in the current context. There are various moral problems that have faced civil servants in their daily work such as the difficulty of having to meet the requirements of the Government and citizens at the same time; distinguish between discretionary and arbitrary; the temptation of using the position as a function of their own benefits; the asymmetry between the administration and the citizens; the excessive bureaucracy and the lack of transparency, among others.

Don't use plagiarized sources. Get your custom essay on
“ Public accountability ”
Get custom paper
NEW! smart matching with writer

Hence the need to create a environment where it be present more transparency paying continuous attention to building a righteous human behaviour because public accountability is a continuous activity, not an ideal state to be achieved. Consequently, accountability is vital because it’s central theme the idea of ​​service and therefore is a key factor to improve the quality of public administration through the honest, efficient, objective and upright conduct of officials in management of public affairs.

The transparency carries with it elements that citizens share, regardless of their religious beliefs, their family relationships, their profession, their craft; common elements which help society to live in harmony according to principles of justice, freedom, equality and solidarity in order to make human relations more satisfying. When the transparency is applied and implemented in the public service is called Public Liability, also called accountability. The idea that accountability is linked to run the society as an active part of the state in which the information is flowing both upwards and downwards and thus be able make real use of social control.

It is clear that, transparency and accountability become characteristic and distinctive governance aspects by themselves in public administration, however they also become markers of socially responsible behaviour with other aspects, this is why it is important not to considered transparency and accountability synonyms as social responsibility, since the previous ones are an expression of a specific aspect of the management process and decision-making of an organization (the evaluation and control for example), whereas the social responsibility should embrace and transcend all phases and activities of the management of an organization. In the present times, there is an increasing conviction that accountability is an important activity for organizations to develop confidence and legitimacy with other social actors, which relates within their own field. This belief has several origin some of them are conceptual, because accountability is part of a framework of values ​​that play on the notion of democracy. Accountability is also associated with the necessary transparency in which public services must perform towards the citizens, particularly to the access of information, but it also to the results achieved by public institutions in the fulfilment of their mission, consequently, the creation of institutional mechanisms to control and social supervision as an institutionalized practice related to the democratic accountability of public management implies the existence of political and administrative systems with a high degree of political legitimacy and administrative efficiency.

However, the action of accountability is not effective by itself. If there is no an active and vigilant civil society to be vigilant and report anything incorrect behaviour, which is why the public services should promote engagement and citizen control reducing the costs of such activity by strengthening citizen participation in the procedures for the development of dispositions of general character, expanding the participation of representatives from civil society on management boards of organizations and public agencies, to effectively ensure accessing to the records and public archives by concerned citizens, open to the public meetings for public decision making, boost customer surveys of public services, developing systems such as random selection of citizens to participate in discussions on specific procedures. Accountability does not only relate to control, to motivate and to convince, but is a concept related to better management and guidance for organizations. Accountability can be used for to manage, to guide and control more effectively the institution. The incorporation of the accountability model where the government “receives” a command to perform a range of tasks by the society, and therefore the Government becomes “accountable” to the society for this task, the government held to account to society for the task that was entrusted. This accountability model includes two directions that are accountable for: horizontal and vertical. The horizontal axis is related to a system in which the power is divided and balanced with a set of checks and balances, in which the law and a variety of public Institutions are included. Meanwhile, the vertical axis is related to the public opinion and election mechanisms, through which the citizens can approve or disapprove an officer through the ballot. In order to achieve a state that is capable of responding to the challenges and requirements from civil society, it is necessary besides the modernization of public administration, the redesign of the state to enable it to respond with the levels of relevance, quality and effectiveness expected from the civil society through public policy. This is why it is necessary further democratic reforms of the State which allows citizens to participate actively in the public administration and in the selection, formulation and implementation of the public policies.

However probably one of the most important and challenging obstacles to be overcome in public management in Latin America, to respond efficiently and timely basis to the current and future requirements from civil society and the private sector, is related to the resistance to change that many public services have to modernizing processes and big changes sometimes affect the processes of governance, especially in regards to the public participation in the actions of the State from both, public services and in its policies and programs. Accountability in this region is almost inexistent. On the one hand, there is no favourable framework conditions, laws, government regulations and culture they are not prone to this practice, moreover, in organizational terms, dimensions such as size, seniority and / or centralization, are critical to define the scope of possible actions. The concept of accountability systems has proven to be very plastic. It could be understood as a range of ideas ranging from the mere access to information, the effective responsibility in the performance of a task, in terms of effectiveness and values; it can also include the time of coercitivity or obligation both legally and morally, and they may empower different public to access information, to be capable to exercise assessments or to apply sanctions. If accountability is taken merely as a monitoring mechanism it could help to avoid misbehaviour, but its greatest potential can be accomplished when it is viewed as a tool to improve the skills of public institutions and moral resources to make the good. The strategic time of accountability implies that the organization is aware that it needs the trust of their audiences, legitimacy from other entities and most of all the loyalty of its employees.

Since the year 2000, in Latin America have been expressing a need for modernization and rationalization of the governments, developing in particular the New Public Management approach, which consists of replacing the bureaucracy with a flexible, efficient management, goal-oriented and concerned about the results and where all of those management techniques that allow to define objectives, determining responsibilities, control costs, and establishing indicators are important to measure outcomes, such the implementation and use of more suitable methodologies for accountability. This has shaped ​​the called Public Administration Accountability to taxpayers, which is founded on the “Value for Money” which relies on three concepts: Economy, Effectiveness and Efficiency, which must be considered holistically and not on an individual basis, where economy is referred to the relationship between the market and the inputs or supplies through the prices of these, where efficiency is the ratio between the product obtained and the desired objectives, including the criteria for the Quality and Service Access are included, efficacy may include Excellence and Equity as well, and finally Efficiency is the relationship between inputs and outputs that is the cost per unit of service. There is an school of thought, the Guideline to the Public Service, which considers not only the important issue of the effectiveness of the Government, but it also maintains that the fundamental challenge is to address the democratic deficit of the current bureaucracies, which focuses strictly in Governance. There isn’t a shortage of ideas and concrete proposals to improve transparency, accountability and political responsibility, and thereby to achieve authentic accountable governments. The majority of these proposals agree on the essential: governmental activities should be made more open for the citizens and they should audit them more diligently, demanding specific liabilities to government officials, whether this are elected, appointed, or career officers. It is may be necessary go even further and restore the essence of the same political institutions, so that the transparency and accountability should become effective at all levels and areas of public administration in the region.

Therefore, is desirable and also necessary to strengthen the accountability of elected officers with respect to their constituencies as well as to give more effective participation of citizens in decision-making. That is to say, to ensure that the government-at all levels and areas-are truly accountable to the citizens. This requires progress towards a participatory democracy that complements the existing representative democracy, as noted at times it becomes merely delegative.

If the semi-direct democracy is implemented, the more power is granted to sub-national governments and citizen participation spaces significantly are extended it might make more accountable governments and bring government closer and the civil service to the sovereign, the people. It is true that the semi-direct democracy mechanisms can be defeated, be emptied of contents and becoming plebiscitarian forms of government. However, in a democratic and participative vein, it seems preferable that the citizens can revoke mandates and propose, approve or deny major initiatives, rather than leaving all this in the exclusive hands of the lawmakers or the executive. In conclusion, what is proposed in the entire mode of governance in favour of accountability is that citizens become more active, direct and effective in the monitoring and the conduction of public affairs part. Since the world of politics is not angelical. It is an illusion to think that there will be accountable and effective, clean and open government, if citizens do not demand it. There will be no participatory democracy if we do not participate. Therefore, in the final and decisive stage, the task of demanding transparency, accountability and political responsibility, it is up to us the people to avoid any kind of erosions in the democracy system or governance. 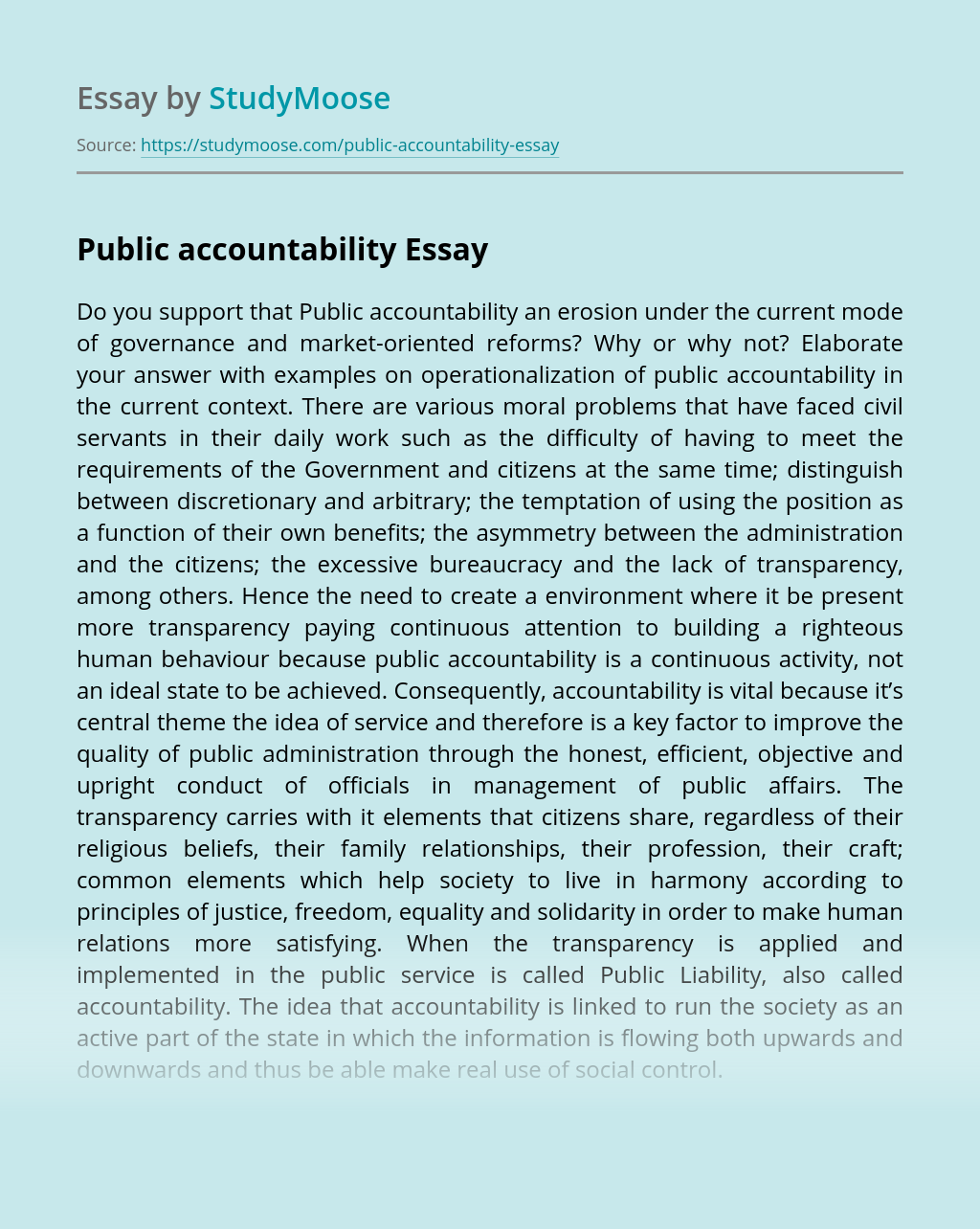