Sunshine laws created by different states are based on the Sunshine Act passed by Congress in 1976. In the United States, for the first time, the Sunshine Act requires that “multi-headed federal agencies” or those agencies that are headed by a committee instead of an individual such as the Securities and Exchange Commission hold their meetings regularly in public (Bardes et al., 2011, p. 423). As the term implies, the government wants more transparency, as well as, give interested parties the opportunities to observe or participate if possible.

Don't use plagiarized sources. Get your custom essay on
“ Sunshine and Sunset Laws ”
Get custom paper
NEW! smart matching with writer

Moreover, these agencies are also required to provide public notice of these meetings in advance to allow people to take note of the agenda and be able to prepare questions if they have any.

According to the Act, the term “meetings” encompass any formal or informal gathering of agency members and this includes even conference calls (Bardes, et al., 2011). The only exceptions to this rule of openness are meetings pertaining to court cases and personnel issues, among others.

Currently, sunshine laws exist at all levels of government in practically every state. Nevertheless, each state has its own version of sunshine laws. For example, in California, open meetings must be held within the boundaries of the jurisdiction of the organization (BoardSource, 2010).

In Virginia, there are about 20 exceptions to sunshine laws. In Colorado, electronic mail, if used to discuss public concerns, also constitutes as a meeting (BoardSource, 2010). It must be noted that states such a Florida and Utah have had sunshine laws even before the passing of the Sunshine Act (McLendon & Hearn, 2006).

Among the most important policies that sunshine laws highlight are (i) expanding upon the democratic tradition of the United States; (ii) providing a check on governmental power; (iii) making government officials more accountable to citizens; (iii) ensuring that information and the authorities that bring it “remain diffused and broadly accessible by different interests within society” (McLendon & Hearn, 2006, p. 646). To note, sunshine laws ensure that the investing public are kept abreast of what’s happening among the agencies that function because of the taxes they are paying.

Meanwhile, a sunset law is a statute or provision within a statute that requires periodic reviews of the justification for the continued existence of that specific law, “administrative agency, or other governmental function” (Hall, Clark, Ely, Grossman & Hull, 2002, p. 770). This means that there are certain agencies, for instance, that will not be in existence forever. It is necessary to put a termination date for certain committees, for instance, since they need to be funded and once their works are over there is no more sense in keeping them.

Occasionally, Congress identifies an end date when it establishes federal agencies or programs. In the event that an affirmative decision is not made for the continuance of an agency or program, then the “sun sets” on them and then they become automatically terminated (Hall, et al., 2002, p. 770). The purpose of sunset laws is to solve the problem of “legal obsolescence” which is a term used to describe the “reduced usefulness or applicability of a statute, regulation, or agency” (Hall, et al., p. 770).

Sunset policies are unique in the sense that they mandate expiration of regulations and agencies on a specified date unless it is determined by legislature that the regulation or agency continues to be useful. The underlying rationale here is that a well-run agency or still-useful regulation will have no trouble getting renewed. States started adopting sunset laws between the late 1970 and early 1980 (Hall, et al., 2002). It is important to note that although Congress passed the Sunset Act of 1977 in the aftermath of the Watergate scandal, it was never signed into law (Hall, et al., 2002).

Sunset laws bring transparency and accountability because there are multiple reasons why laws become obsolete and therefore no longer useful for citizens. Among these reasons are (i) laws are created as response to specific problems or crises; (ii) specific problems with laws may not manifest themselves for decades; and (iii) certain laws become obsolete in the face of international competition and rapid technological advancements. (Hall, et al., 2002). Because some laws have funding components, or are administered by the same entities for years, sunset laws enhance transparency and accountability.

In conclusion, both sunset and sunshine laws are created so that the public’s various rights in a democratic society are promoted. The sunshine laws promote greater public participation in government matters while sunset laws ensure that government funds are not squandered in committees or agencies that do not serve any purpose.

Administrative Conference of the United States. (n.d.). Government in the Sunshine Act. Retrieved on August 17, 2012 from http://www.acus.gov/research/the-conference- current-projects/government-in-the-sunshine-act/ 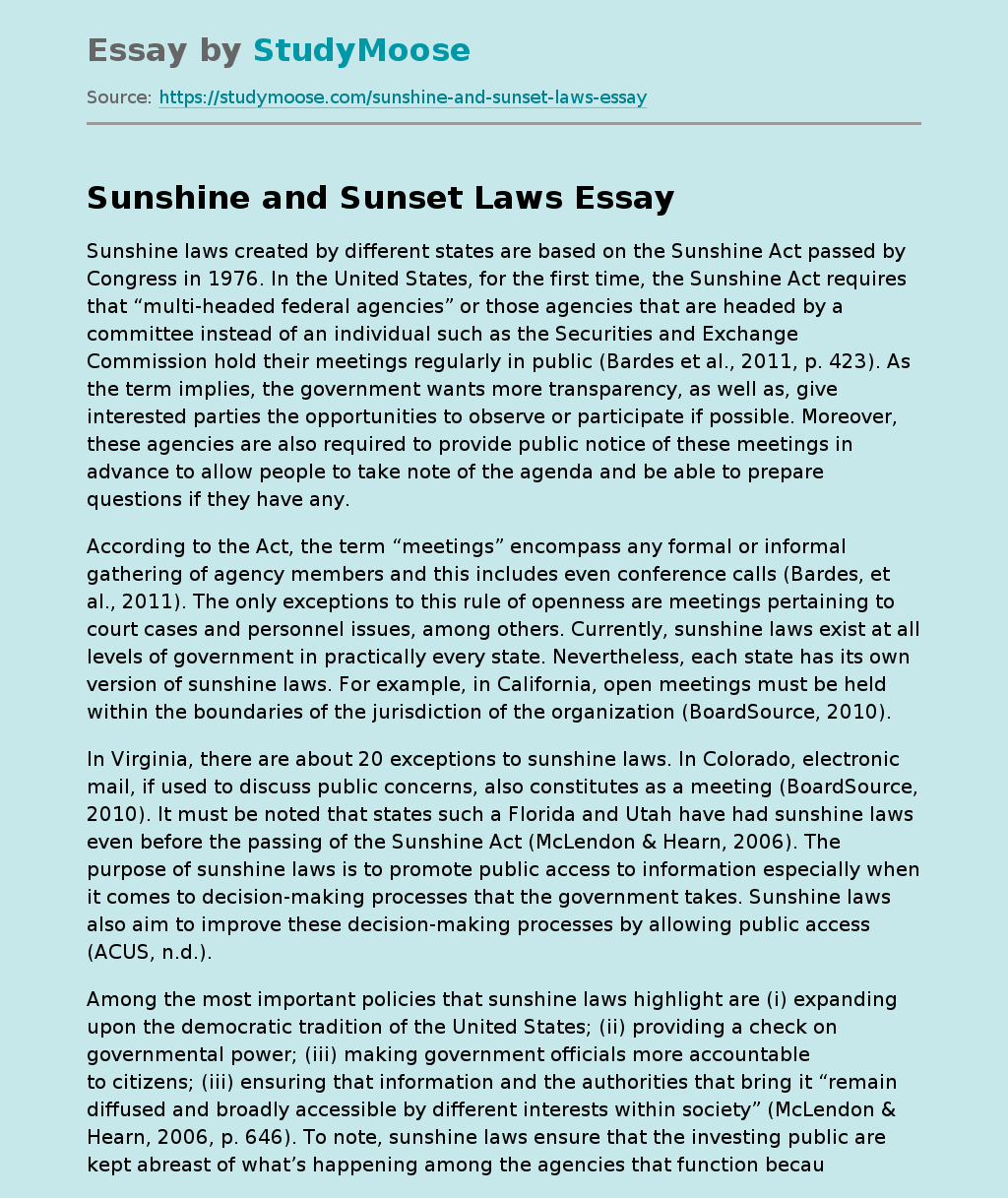