The Byzantine Empire And The Islamic Caliphates

During the Post-Classical time period, the Byzantine Empire and Islamic Caliphates were similar in that they both had leaders in charge of everything and they both destroyed sites and objects that were believed to be sinful; however they were different in how the laws were created and how they dealt with unfavorable religions.

To begin with, the Byzantine Empire and Islamic Caliphates are alike in that they both had leaders who were in charge of everything and they both destroyed sites and objects that they believed were sinful.

Don't use plagiarized sources. Get your custom essay on
“ The Byzantine Empire And The Islamic Caliphates ”
Get custom paper
NEW! smart matching with writer

The Byzantine Empire used a system of Caesaropapism. Caesaropapism is a political theory in which the Emperor is also the head of the church. Therefore, the church and state are intertwined. The Islamic Caliphates had leaders called Caliphs. Caliphs were successors to Muhammad. Caliphs were in charge of political and religious affairs. Comparable to the Byzantine Empire, the Islamic Caliphates also had a government where church and state were united. These two territories probably didn’t separate church and state because they wanted to have a united nation.

If church and state are together then everyone will be taught the same things and most people will have the same views. They taught these two concepts together so the territories would have a clear understanding of what was accepted. Secondly, the Byzantine Empire and the Islamic Caliphates both destroyed sites and objects that were viewed as sinful. In the Byzantine Empire many people worshiped icons. Icons are people or things regarded as a symbol of something.

Some icons that were worshiped were paintings, statues of Jesus, and saints.

When Emperor Leo III came along he did not approve of this. He had all of the icons destructed. In the Islamic Caliphates, pagans prayed to idols, not to their god. This was considered sinful so the pagan sites were destroyed, excluding the Ka’ba because of its importance. These icons in both territories were destroyed because they were considered unholy. The Bible and The Quran forbade the worship of icons and clearly state that you should pray to and worship God/Allah himself.

Despite the similarities between the Byzantine Empire and the Islamic Caliphates, there were differences as well. They differ in the ways they create their laws and how they dealt with the practicing of unfavorable religions. The Byzantine Empire codified Roman law. They based their laws off of the laws the Roman Empire had and just updated and fixed them a little bit. The reason they used Roman law is because they inherited part of Eastern Rome. They decided to just stay with the laws that they used and make a few changes because that was the easiest and most sensible thing to do. The Islamic Caliphates used the Quran and Sharia to outline their laws.

They believed that everything that was written in the Quran and Sharia was true and right. They based their laws off of them because they believed the guidelines stated in them should be followed. Another difference between the Byzantine Empire and the Islamic Caliphates is the way they dealt with the practicing of other religions. The Byzantine Empire respected Christians only. Justinian launched a campaign that forced all pagans to be baptized into Christianity. They did this because the church and state were intertwined and they believed that everyone practice the same religion.

The goal was to create a unified nation under one religion. The Islamic Caliphates favored Muslims but allowed people to practice other religions. They gave people the choice to either convert to Muslim or to continuing practicing their own religion; although if they chose not to convert they had to pay a head tax as a consequence. This head tax was called Jizya. They did this because they wanted to have a unified nation with one religion, like the Byzantine Empire, but they understood not everybody would agree on one religion, unlike the Byzantine Empire.

The Byzantine Empire And The Islamic Caliphates. (2016, Sep 16). Retrieved from https://studymoose.com/the-byzantine-empire-and-the-islamic-caliphates-essay 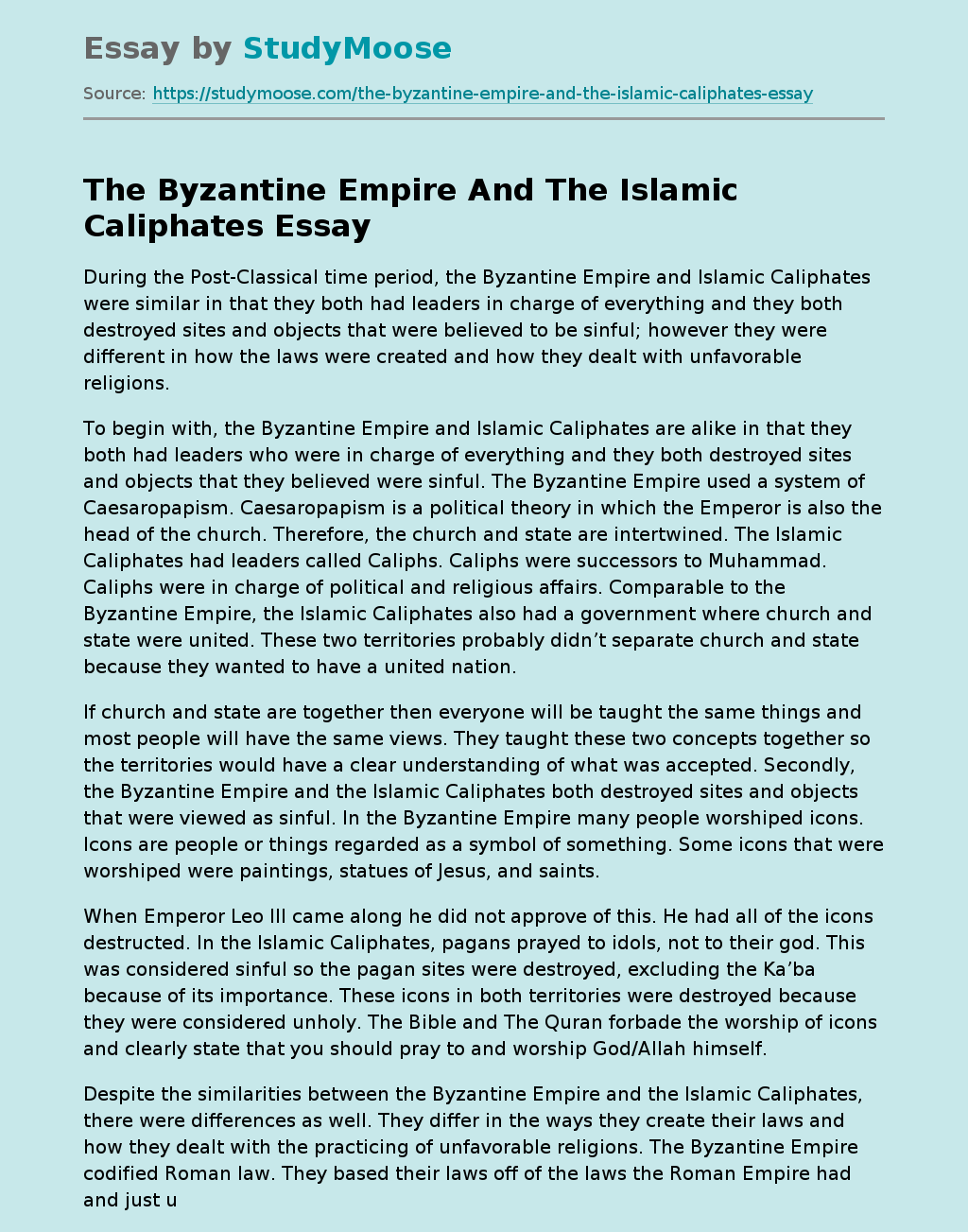