The Byzantine Empire and Medieval Europe

There are many similarities and differences between the Byzantine Empire and medieval Western Europe. There are also many factors that have contributed to their changes. The reign of these emperors and traditions of these empires had led to important historical developments and has also taught us on how political leaders should have ruled. The reign of Byzantine emperor Justinian I from 482–565 C.E. was of both glory and destruction. Justinian reconquered much of the former Roman Empire while creating lasting legal codes and cultural icons such as the Hagia Sophia, the world’s largest cathedral.

Don't use plagiarized sources. Get your custom essay on
“ The Byzantine Empire and Medieval Europe ”
Get custom paper
NEW! smart matching with writer

But as soon as Justinian came into power everything changed. He introduced all the laws that never existed into the government and he ended all already established customs. He eliminated existing offices, established regulations of the army and invented new ones for the management of public affairs.

His reason for doing so was not to improve justice but just because he wanted everything new and named after himself, even if something was out of his control he renamed himself anyway.

According to Chapter VII of the secret history, Procopius describes Justinian as: fake, two-faced, cruel, hypocritical, never moved to tears by either joy or pain, a liar always, a faithless friend, a treacherous enemy, insane for murder and plunder, quarrelsome and revolutionary, easily led to anything, never willing to listen to good counsel, quick to plan mischief and carry it out, but finding even the hearing of anything good distasteful to his ears. It is obvious that Procopius is not fond of Justinian.

In fact, the Secret History was probably written because he could not openly criticize the Emperor. Procopius’ desire is obvious, it shows that he wants to show what a horrible emperor Justinian was.

In my opinion, Procopius’ description might have been a bit exaggerated because Justinian is still known for various achievements throughout his reign. These included the building of Hagia Sophia, the Justinian Codes and the recapture of many western provinces of the empire. These achievements were not admired by many such as Procopius but there are distinctly different views of his success. As a person Justinian didn’t seem to make smart decisions and he depended on his wife Theodora during tough situations but he did make changes to laws that benefited himself and his people. He also continued Roman cultures. On the other hand, Charlemagne was the first of the Holy Roman Emperors, crowned in the year 800 by Pope Leo

III. Charlemagne continued his father’s policies and protected the empire by removing the Lombard’s from power. He reigned during a time of much chaos and turmoil in Europe during the middle ages. In Einhard’s Life of Charlemagne he describes Charlemagne’s ideals, beliefs and traits. As said by Einhard, Charlemagne was a man of many talents. He spent time trying to promote Christianity, organizing the kingdom, church and nobility around himself, trying to create a central government. I feel that Einhard’s chronicle on Charles was not exaggerated; it is obvious that Einhard sees highly of him. To compare Justinian and Charlemagne, both Justinian and Charlemagne tried to strengthen their empires but Charlemagne was more successful. Charles gained power of central Europe and Italy whereas Justinian failed to regain power on territories in the East. Charles created local and government officials called counts that supported justice and raised armies whereas Justinian only created the Justinian code.

Economic differences between the two were that European’s practices of manorialism lead to an agricultural based economy with little trading outside of Europe whereas the Byzantine Empire became the wealthiest empire in Europe. Basically, the West was not developed as the Byzantine empire. This is because Constantinople was the bridge between Europe and the rest of the world, and became the center of east-west trade. Policraticus, by John of Salisbury, and The Prince, by Niccol Machiavelli, show distinct differences of the ideal ruler between the Medieval Ages and the period of Renaissance. The two books were written in different eras, and they both talk about the true importance of an ideal ruler and how they should perform in order to maintain their power.

The most significant differences between the two writers are their different views on religion, political power, and political goals. The different ideas about religion separate the Renaissance from the Middle Ages. It is clear that the church played a major role in the lives of those in Middle Ages than in those of the Renaissance. John of Salisbury emphasizes that all power that the ideal ruler holds is from God and that He applied it through a subordinate hand to make all things teach His mercy or justice.

He also states that the order for the prince is to fear the Lord his God and to follow God’s words. Whereas for Machiavelli, ignores the problem of religion. He chooses not to talk about it in his writings. He treats religion and government as two different things. He believes that the law is made by the ruler and not by God. Another difference between the two is their different view on the interests of the ruler. John of Salisbury believes that the ideal ruler’s objective is to make his people wealthier and his empire successful. In contrast, for Machiavelli, the goal of the prince is to maintain his power and to satisfy his people.

The Byzantine Empire and Medieval Europe. (2016, Aug 12). Retrieved from http://studymoose.com/the-byzantine-empire-and-medieval-europe-essay 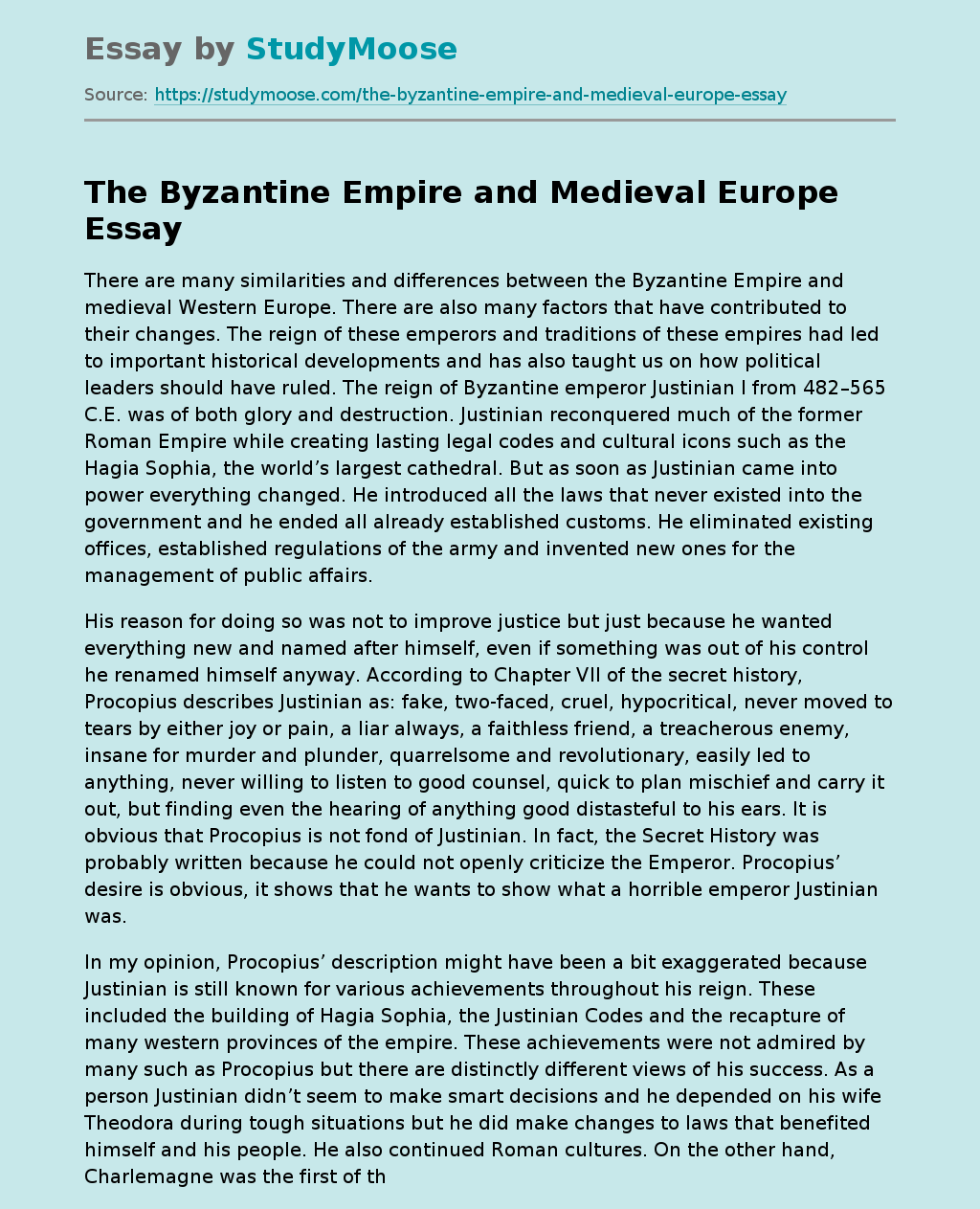