Knights were the most advanced fighting unit of the Middle Ages. Developed mainly by Charles Martel, they were horsemen, armored and carrying swords. By definition, a Knight was a mounted warrior in the service of his liege-lord (Snell, “Defining the Knight”, Knight Life, Internet). He they would generally receive a fief in exchange for their services. But Knights also became important as a symbol of honor, nobility (in the moral sense of the word), and loyalty towards the sovereign.

Who could become a Knight? They were often sons of nobles, but could also be mercenaries.

Don't use plagiarized sources. Get your custom essay on
“ Knights in Medieval Europe History ”
Get custom paper
NEW! smart matching with writer

The traditional Knights, those who fought for their Lord and for pride and King and Country etc. often despised the mercenary knights (MacDonald, 7), who would easily switch allegiances to whoever would pay the most.

These noble sons would be sent to another Knight’s court for a long period of time, usually when they were 6 or 7 years old. Before that, they would have been playing war games with other boys, which was important to induce a fighting spirit (MacDonald, 11).

They would then become a page there until they reached puberty. A page’s duties included all of the most menial tasksrunning messages around the castle, helping the servants wash the dishes and clean clothes, and other such things. Once the boy reached puberty, he would become a squire.

As a squire, his duties would include maintaining his master Knight’s armor, and accompanying him on horseback (one of the first skills the young squire would learn) everywhere he went.

He would carry the baggage, and maintain the armor and weapons when on campaign, or at tournaments. During this time he would also be taught the arts of swordsmanship, archery, horseback riding, and other knightly skills (Encarta, “Chevalerie”). He would also learn how to put on and wear armor, and to be comfortable with it. Most knights even had to learn to do handstands in their armor, because they needed to learn to be agile (MacDonald, 10).

They would also practice jousting and using lances at the quintain, which was a tall pole with a pivot on top. The pivot had another piece of wood on it, on one side of which was a dummy wooden shield, and on the other side a heavy counterweight. The charging knight (or squire) would have to hit the dummy shield hard enough with his lance that the counterweight went all the way around, yet fast enough that it couldn’t come around and hit them in the head. This and all sorts of other training would continue until the squire was 21 years old.

For the squire to graduate to the status of Knight, he must be accepted by another knight (usually the one to whom he has been first page then squire). This ceremony, contrary to common belief, is nothing more than either a hard punch to the squire’s face from the Knight, or a good smack with the flat of the Knight’s sword. The squire has then become a Knight as well, and may Knight other squires or become vassal to a liege-lord, or accept vassalage from another lord. He also gained the title of “Sir” before his name, and could generally be called “Sir Knight” by those who didn’t know his name. Knights didn’t always become nobles or hold land, but they generally did because it enabled them to pay for the expensive costs of obtaining and maintaining armor, horses, weapons, and servants as well as the training of squires and pages.

With the status of Knight came the morals and responsibilities that went with it. Knights were supposed to be honorable, chivalrous, and courageous. There were also supposed to be gentlemen, well-behaved, educated and intelligent. However this was more of an ideal than fact, and most knights did not live up to these high standards. However, many did try to have good ethics and keep good morals, and took as their example of the most chivalrous knight Sir Lancelot, from the tales of King Arthur and the Knights of the Round Table.

The weapons that a Knight would use differed, but they generally consisted of a sword and a lance. The sword was for close range fighting, either for hacking at other Knights and foot-soldiers from horseback, or, if the knight was knocked off of his horse, to swordfight. Indeed, good swordsmanship was generally what would save a knight’s life (Salariya, 16), and was almost as important as good horsemanship. And a knight’s horse was indeed a weapon.

The horses were bred especially to carry heavy loads and run not necessarily extremely quickly, nor be extremely agile, but to be powerful and to put a lot of force behind the knight. The horses were also intelligent, and were trained to kick at enemy foot-soldiers, and to consciously trample them. They were very effective weapons, and good horses were prized as much as the knights themselves (Encarta, “Chevalerie”).

Armor was the next most costly piece of equipment after a horse, and was also very necessary to a knight. Armor varied widely in style and type, but around 1400 it was generally all plate armor. This was because plate armor defended better against not only swords, but the heavy blows of lances and maces. Chain mail armor (which had been common in the 1300s) could not be cut through, but was not rigid enough to prevent the breakage of bones, and arrows could also pierce through it. Armor was generally custom-made, and was very expensive. A full suit of plate armor could weigh over 30 kg, yet a knight (as stated before), would have to learn to be fully mobile in it.

Aside from warfare, tournaments and jousting were an essential part of a knight’s life. They were the way to fame and fortune, as well as finding a liege-lord from whom to obtain land. Those who were successful were often picked out by wealthy knights to become their vassals. The jousting tournaments were also a way to the ladies, who often came and watched.

Knights were a significant part of the feudal system, and constituted the main body of most armies. They were also an important moral aspect of the middle ages. Knights are a part of our past that has been glorified, and they will always be remembered as great figures on great warhorses in shining armor. 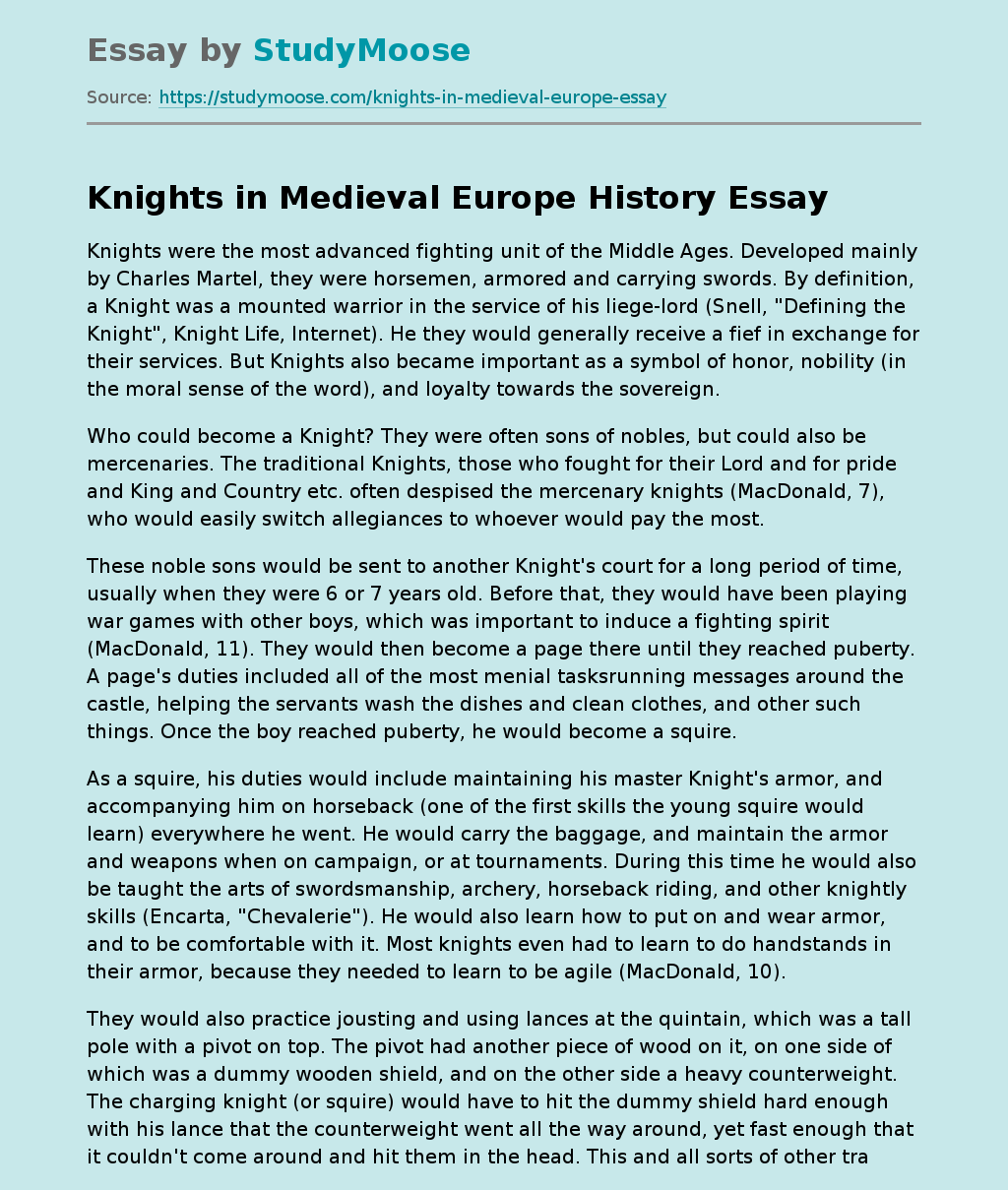