Summary of Medieval and Renaissance Criticism

Summary of Medieval and Renaissance Criticism

MEDIEVAL CRITICISM
The period between the Classical Age and the Renaissance is vaguely named the Middle Age or the Medieval Age. In England, this period spans eight centuries and historians place it from the year of composition of Beowulf in 725 AD to 1474 AD when Caxton published the first book ever printed.

The only standard work that dealt with Medieval Criticism is English Literary Criticism: The Medieval Phase by J.

Don't use plagiarized sources. Get your custom essay on
“ Summary of Medieval and Renaissance Criticism ”
Get custom paper
NEW! smart matching with writer

W.H Atkins published in 1952.
One major development in this age is the adoption of Christianity as the religion of the Mediterranean region. Roman Catholicism prevailed in Western Europe.

Classical elements were absorbed in the Medieval Age, sometimes modified and later became a part of it. Many pagan literature were incorporated into the medieval ethos(character). The critical terms in vogue during the Classical Age were popular with the writers of the age and they even followed the prescriptions on the art of composition as laid down by the rhetoricians of the previous age.

Medieval Criticism systematically classified literature under grammar, rhetoric and poetry. The Medieval Age developed a systematic poetic grammar. The term grammar meant the science of correct speaking and reading curriculum for poets which was for the formation of the basis of literary creation and development eloquent speech. This grammar curriculum provided for the humanizing influence in the Middle Ages.

Another form of criticism was prosody; the study of versification and scansion. Prosody was meant to provide basic training for prospective poets in the basic poetic forms.

Horace had a clear influence on the Middle Ages. There was always a debate as to which logic or grammar should gain precedence over the other.

Poetry was considered a prophecy or revelation and was equal to philosophy in the Old World. A considerable amount of medieval criticism dealt with biblical criticism and mysticism and allegorical reading of works. The poets were theologians and their poetry was the overflow of moments of inspiration. Poetry existed with and in grammar, rhetoric, logic and philosophy.

Though the Middle Ages were a dark period, there are some works which tell us that these were the ones that prepared the ground for Renaissance thought, and later, a continuous critical tradition. There was an educational system following the Roman model which encouraged cultivation of poetry.

A critical climate developed slowly. There were a few works of notable significance. In the 7th century, Bede and Alcuin expounded grammar, logic and Biblical and Christian poetry. In the 12th century, John Salisbury and a few classical theorists infused life into literary studies. In the 13th century Geoffrey of Vinsauf and Josh Garland taught techniques in poetic composition using manuals, theorizing at its infancy. Roger Bacon and Richard of Bury kindled enthusiasm for poetry and literature. The Owl and the Nightingale(circa 1210) written by and unknown poem, a debate poem is the earliest surviving English lyrics of medieval period expressing a native and pure English sensibility. The strength of the poem lies in its use of the vernacular.

The employment of colloquial language as spoken by the common people, and the proverbs used in the dialogue carry the age-old wisdom of the English nation. This can be seen as a forerunner of the movement towards the use of the vernacular in English poetry. Dante Alighieri (1256-1321) too defended the use of the native or vernacular medium rather than the courtly Latin for literary composition. He set an example in composing Divina Commedia in Italian, thus establishing spoken dialect for use in serious epic poetry. According to him, secular poetry also had hierarchy of four levels of meanings corresponding to the four levels of scriptural exegesis – the literal, the allegorical, moral and spiritual. He maintained that it was essential for a practicing critic to analyse and understand the literal sense first before he moved on to more appealing and edifying senses of higher levels of symbolic or esoteric meaning.

LITERARY CRITICISM IN THE RENAISSANCE
The term ‘Renaissance’ is of Italian origin meaning ‘rebirth’ or ‘reawakening’. It stands for the historical rebirth of the 14th, 15th and 16th centuries. The movement initially started in Italy and later spread to France, Germany, England and other European countries.

There are two views regarding the Renaissance movement – One view is that the Europeans believed they have discovered the greatness and superiority of the ancient Greek and Roman culture after the dark Middle Age. The other view is that the Renaissance was not an abrupt movement, but had its roots established even during the medieval times and the movement was one of gradual progression.

There was a revival in the study of arts and literature, sparked by an interest in Greek and Roman literature of the Classical Age. The classics were reinterpreted by Italian men of letters. The widening of the horizon of knowledge was accelerated by printing technology. The focus of interest in study shifted from abstract notions such as God and nature to man. The inherent divinity in the human being as well as the dignity associated with him became the subject of study,.

Literary criticism during Renaissance was tasked with justifying imaginative
literature. The basic belief was that literature was the by- product of theology or philosophy. Literature was not evaluated through criteria. The yard stick for judging poetry was neither literary nor critical. During the Renaissance, a large body of literature of the past was recovered and the real task was to establish justifiable considerations by which these works could be justly estimated.

One other task was to seek a just and proper answer to Plato’s refutation and objections raised in his dialogues and the Republic. Many Renaissance scholars successfully answered these charges by blaming the artist and not the art. Those who abuse art and betray the sacred office of art should be banished from all commonwealth.

Renaissance criticism took upon itself the prime duty of uniting and reconciling the best elements in Aristotle and Horace and establishing literary criticism as an independent field of study.
Prominent Renaissance critics are Petrarch, Scaliger, Minturno, Boccacio and the Italian Roberto and Castelvetro.
The greatest and most important work of this age is Sidney’s Apologie for Poetry. Elizabethan criticism exhibits two traits. First, there is in existence a complete body of critical works of the Renaissance and secondly, it shares several characteristics with the works of other European countries associated with the Renaissance. English Renaissance is not an isolated phenomenon. It exhibits a clear line of progression falling into the following demarcations.

There are mostly rhetorical studies of literature in the first stage of evolution. Thomas Wilson’s Art of Rhetoric (1553) is probably the first work of criticism in English language. Roger Ascham’s Schoolmaster(1568) and Richard Tottel’s Tottel’s Miscellany(1559) are two other important works. The English came to learn that form and style were important considerations in literary appreciation. It was during this period that English poetry was Italianised to a great extent. The second phase was a period when attention was paid to the metrics and metrical patterns in poetical composition. Art of English Poesie(1589) by Richard Puttenham and Discourse of English Poetry(1586) by Mary Webb are the earliest works on classification of metre, and the introduction of classical metres into the
English language.

The third stage is the stage of philosophical criticism. Among the most prominent works of apologetic criticism of this period are Sir Phillip Sidney’s Apologie for Poetry(1583). Thomas Campion’s Art of English Poesy(1602) and Samuel Daniel’s Defence of Rhyme(1605).

The fourth stage belonged to the first half of the 17th century. Ben Johnson was the important figure during this period. He was a classicist. If Sidney taught poetry, then Johnson taught it. There is an unmistakable influence of Italian criticism here. This stage opens up a new dimension in English literary criticism when the French came on the scene. A patriotic spirit inspired this period. Some of its characteristic features were a devotion to the national cause, commitment to classicism in a pure form and the faith that art should imitate nature. John Dryden, the poet laureate was the presiding genius of this period.

With its emphasis on humanism based on the idea that people are rational beings and its faith in the dignity and worth of the individual, the Renaissance was a period of intellectual ferment that prepared the ground for later thinkers who arrived on the literary scene during the period of Enlightenment.

Summary of Medieval and Renaissance Criticism. (2016, Mar 14). Retrieved from http://studymoose.com/summary-of-medieval-and-renaissance-criticism-essay 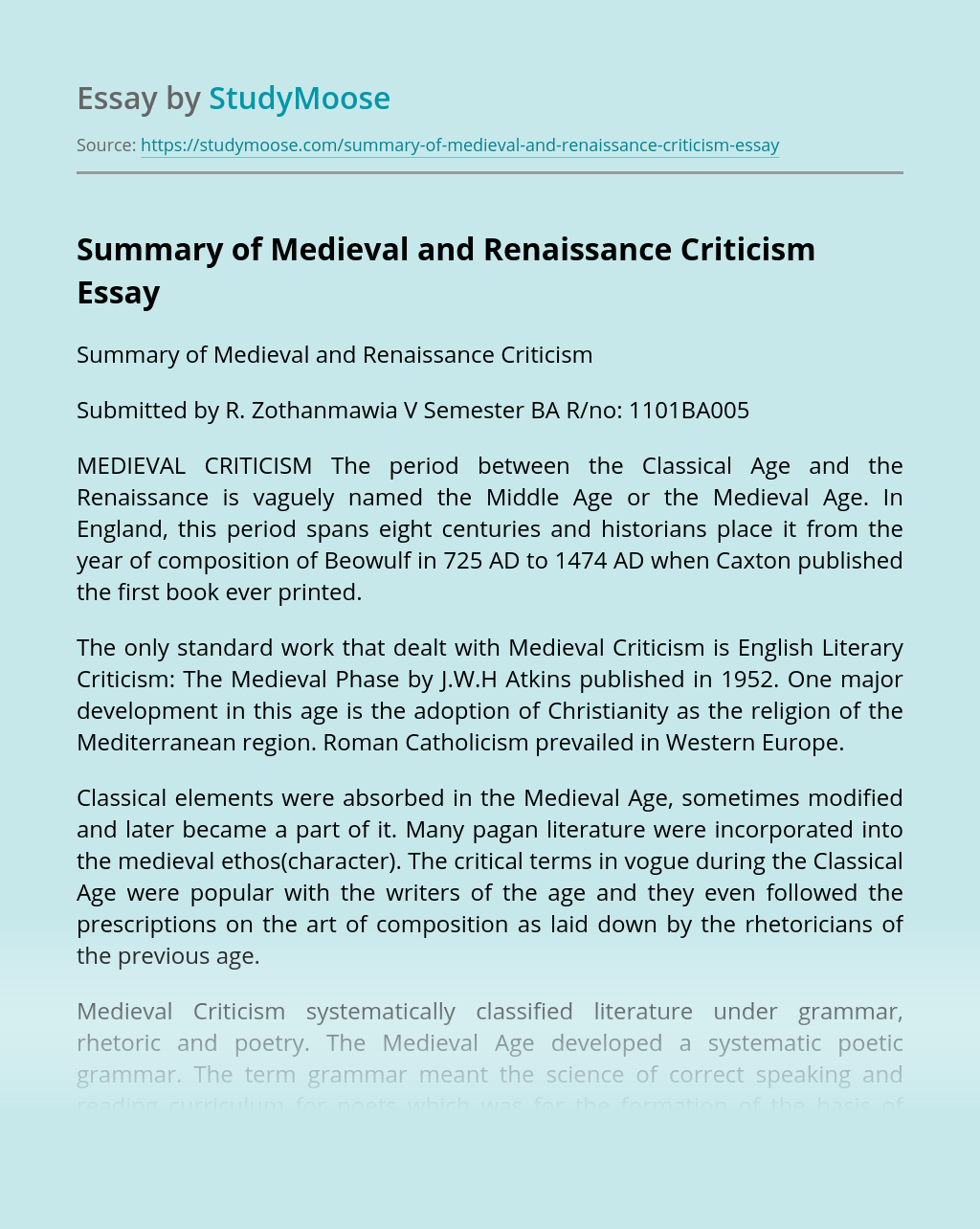