The Early Renaissance was founded in Florence, Italy in the 15th century. It probably flousrished in Florence because of its location, being that it is in the center of Italy. This period was called Renaissance because it means “rebirth” There was a revival of interest in the classical art, targeted especially towards the ideas of Ancient Greece and Rome. Artists during the period of they Early Renaissance tried to depict the human figure with elements like proportion, gestures and expressions, and realistic objects and clothing as well.

Don't use plagiarized sources. Get your custom essay on
“ Early Renaissance in Florence and High Renaissance in Rome ”
Get custom paper
NEW! smart matching with writer

They also used other techniques like modeling, which gives volume to rounder elements, and perspective.

These artists also tried to establish new methods to portray three dimensionality, giving forms a more real and life like quality. They did so by observing humans and animals so that they could gain a better understanding of this. Artists of the Easty Renaissance tried to create consistent forms with the relevance to the world along with what people experienced on a daily basis.

The content of paintings changed as they progressed into Early Renaissance. The subject of art was used based on Roman history and and from myths, as it slowly pointed and leaned more towards religion. Even though artists had the vast freedom of developing and exploring of using new materials and techniques to apply to their works, many times they were only encouraged to create works with relevance to the Bible with the flexibility to choose their own sucject matter. Some of the main characteristics of the art period of the Early Renaissance include: harmony, proportion, realistic gestures and expressions, rational posture, light, and color.

Although the Italian Renaissance first bloomed and blossomed in the city of Florence, it soon spread to the city and capital of Italy, Rome. Rome was always known for its high living and its fine arts. By the beginning of the 1500s, there seemed to be a rapid growth of artistic creations that totally changed the city. The period of art and in history known to be as the High Renaissance, saw the bang of creative geniuses and their masterful and talented use of techniques and ideas that were first used in Florence. Many Europeans were drawn to this city, where the church offered enormous opportunities that could help artists achieve and become well known by a larger public.

Due to the fact that the church had so much control and say over the Italian population and because of their contribution to art, many of the themes in art embodied religious themes. At this particular time, painting especially reached its highest point of technicality with magnificent artistic imagination and incredible heroic composition. Renaissance encompassed many Classical elements that extracted the details and showed the world as it really was. Nonetheless, the artworks of the High Renaissance explored and seeked for a more broad and unified architectural outlook and pictorial represententation.

There was an explosion of dramatic force in art forms that took in strong energy and created a more controlled equilibrium. Some of the main characteristics of artworks in the High Renaissance are: unity, balance, spatial harmony, light, colors, proportions, chiaroscuro (the use of lighting and shading effects), composition, and perspective. Artists of the Early Renaissance broke away from older styles and introduced new elements as well as techinques. However, it was those artists in the High Renaissance who not only mastered, but perfected these tchniques.

The most obvious differences between the Early and the High Renaissaince is the shape of figures and the use of chiaroscuro. Painters of the Early Renaissance strongly leaned towards using three dimensionality, but the new technique still did not look quite right. For instance, in Fra Angelico’s Lamentation Over Dead Christ, there is a sense of three dimensionality, but at the same time if the viewer looks at it longer, it does not make sense. The figures look almost flat. Not to mention, the halos on the figures’ head has absolutely no sense of three dimensionality.

Although he attempts to create the illusion, it does not quite add up together. In Michelagelo Buonarroti’s The Creation of Man, it is evident to see that Adam is not a flat figure. Michelangelo uses elements of chiaroscuro to create Adam as a full, voluptuous, and three dimensional figure. Michelangelo created many sculptures. Two singnificant sculptures, one created during the Early Renaissance and the other created during the High Renaissance, caught my attention. Even though both sculptures were created by the same artists, it is interesting to see that they are both very similar, yet at the very same time, they show significant changes and differences. David was created in the Early Renaissance. He is shown as an ideal human standing in a contraposto position, which are traces of Ancient Roman and Greek sculptures. David encompasses features of a perfect human being such as strength, shown by the details of his muscles. Nonetheless, it seems that Michelangelo’s proportions are not quite right. His upper body, expecially his hands, seem larger. It is later on that Michelangelo shows us how he has evolved as an artists by creating Moses in the High Renaissance.

I personally think that this is one of Michelagelo’s most life like and realistic sculptures. Moses encompasses so much intricate details that bring the sculpture to life. Unlike David, Moses portrays enormous amount of strengh, energy, and movement. The sculpture itself tells its own story through details such as muscles bulging out, thich swelling veins, his strong legs, and his tangled up beard. Michelangelo also shows better representation of proportion in this later sculpture of Moses. Another aspect that differentiates the two periods is the significant element of perspective. Comparing

Masaccio’s The Tribute Money, painted in the Early Renaissance and Raphael’s School of Athens, which was painted in the High Renaissance, one can see how far artists have gone to perfect the technique of perspective. Although both paintings share similarities, showing use of perspective, Raphael’s painting is obviously a lot more intricate. In both paintings, a lot seems to be going on at the same time. In The Tribute Money, Masaccio demonstrates perspective using depth, as seen in the background, where the mountains are. The illusion of space is also reinforced with linear perspective which lies right behind the group of people.

In The School of Athens, Raphael is able to give the viewer a sense that although there is cluster of people in the painting, everything seems to be balnced beautifully. He uses symmetry, which balanced out his painting. He also uses the element of perspective in a much masterful way. The viewer is able to sense the illusion of depth by the sizes of the arches. The arch in the front of the room seems larger than the ones in the back, giving the viewer a perception that the setting of the painting is in a long hall. Another genius element that he implements in his painting is a vanishing point between the two philosophers in the middle, drawing the viewers eyes especially to that point. All in all, Raphael’s masterpiece is able to portray very great use of important elements of the High Renaissance: balance, harmony, and unity. The artists of the Early Renaissance opened up many doors for many of the later artists in the High Renaissance. It is evident to see that during these periods of art history, beautiful masterpieces were created by genius artists. Although these two art periods share many characteristics, there are also many differences among them. 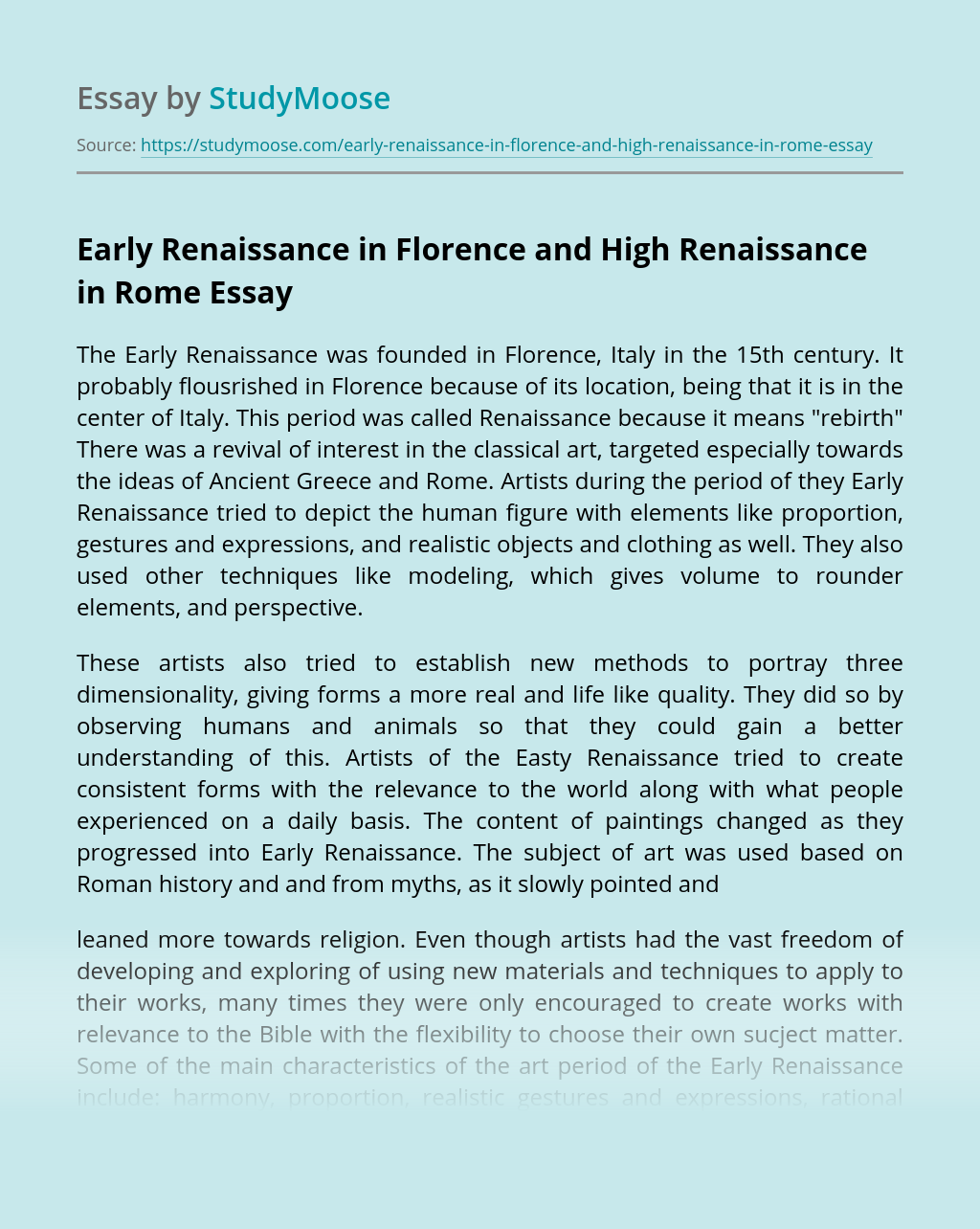