Analysis of the play "Florence" by Alice Childress

This 1950 play by Alice Childress takes place in a train station waiting room in a very small town in the south. The play describes how Miss Whitney, an old black woman, discovers that her premonition of the success of her daughter, Florence, as a black actress is undesirably similar to that of a racist, white society. This troubling discovery has just as strong an impact on the reader as it does on Miss Whitney. This drama teaches the reader how the views and opinions of individuals or groups can influence other individuals or groups, although their views and opinions may be opposite, to approach situations with the same reaction.

Don't use plagiarized sources.
Get Your Custom Essay on Analysis of the play “Florence” by Alice Childress Just from $13,9/Page

After she calls home to ask for money, Marge is convinced that Florence will fail because she is a black woman attempting to make it in a business dominated by whites in a racially segregated society. Although Miss Whitney seems to have a little bit more faith in Florence, she still wants convince Florence to come back home.

They even have a check ready to pay for her trip home, which is causing them to be late on their rent. This reveals to us that they are willing to sacrifice a little in order to prevent Florence from possibly failing in her quest for success. As Marge speaks to Her mother she reveals her mentality in regards to Florence’s situation, “She ain’t gonna get rich up there and we can’t afford to do for her. She got notions a Negro woman don’t need. She must think she’s white!” (Childress. 1320) Her mother expresses a bit more faith responding, “Maybe we shoulda just sent her the money this time. This one time.” (Childress. 1320)

As Marge leaves the station we are introduced to Mr. Brown, an old black porter. As Mr. Brown speaks with Miss Whitney we find out that his son and brother are both attending different colleges. This makes it known to the reader that Miss Whitney feels it “takes an awful lot of goin’ to school to be anything.” (Childress.1322) Mr. Brown also informs Miss Whitney that his brother saw Florence in a movie. This excites Miss Whitney only for a second as she proceeds to ask Mr. Brown about his brother’s aspirations, as if it were more interesting. The conversation is short due to the entrance of Mrs. Carter.

Analysis of the play “Florence” by Alice Childress. (2016, Jun 19). Retrieved from https://studymoose.com/analysis-of-the-play-florence-by-alice-childress-essay 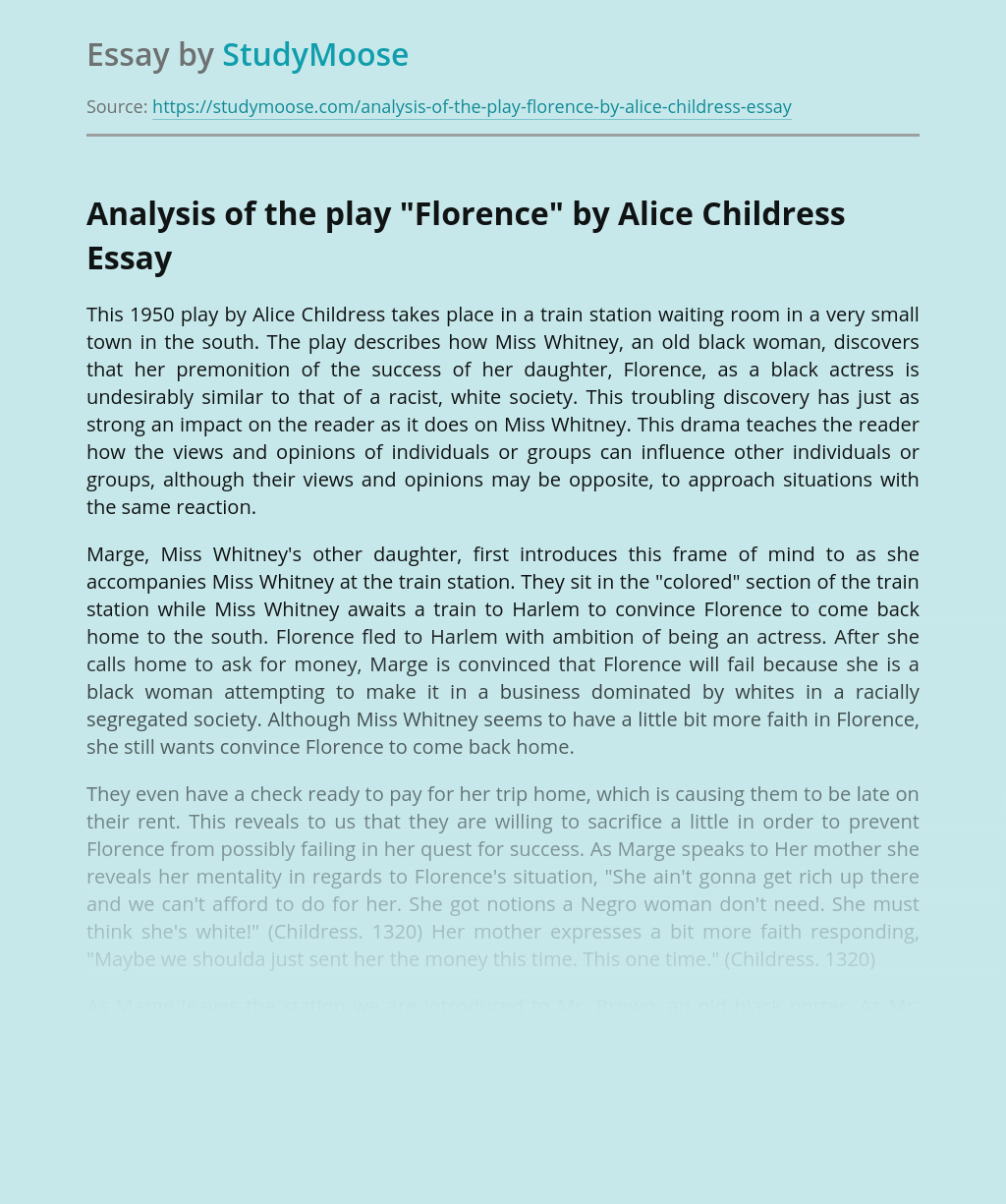 Many people have often been asked what they thought their ideal mate should be like. The answer to this question for most is the typical “model” prototype. In the research article “Hong Kong Chinese Parents? Perceptions of the Ideal Child”, a study was done regarding parents? ideas of what their “ideal” child would be like....

Own working practice can affect children and young people’s development in many ways. Children learn trough impersonation, so it is important to always keep in mind that they need to have good role models. When I am working with children, I always remember to be encouraging and trust worthy. When working with children I’m always...

Get Essay
The Impact of Single Parent and Child Development

Scares, bruises, and welts are just some of the marks abusive parents leave on their children. However, spanking and slapping on the hand when disobeying are ways to teach loving discipline. In Justice: Childhood Love Lessons bell hooks claims that “No one can rightfully claim to be loving when behaving abusively.” Parents that abuse their...

In 1979 led by Deng Xioping The People’s Republic of China, located in South East Asia, implanted what is called China’s one child policy or (as referred to by the Chinese government) the family planning policy. This policy restricts married, urban couples to bearing only one child and 35. 9% of China’s population is subject...