Florence Nightingale: Theory Has Revolutionized the Profession of Nursing

Nursing theory has shifted the nursing metaparadigm from being reliant upon the standard care of medical practice to becoming autonomous. It has provided nurses with great strength and continues to transcend our capabilities. There have been several theorists to reform the art of nursing practice, but one individual substantiated the role of nursing dynamically, Florence Nightingale. Florence’s courage and fortitude paved the way for generations of future nurses. Her vibrant spirit, charisma, and creativity resonates with nurses today. Florence Nightingale’s influence was fundamental to the growth and significance of the nursing profession.

Don't use plagiarized sources. Get your custom essay on
“ Florence Nightingale: Theory Has Revolutionized the Profession of Nursing ”
Get custom paper
NEW! smart matching with writer

Her theory reigns most attributable to this day.

Florence Nightingale was born in Florence, Italy on May 12, 1820. Born into wealth and under the tight supervision of her father, Nightingale was provided the most exceptional and extensive of educations. She learned to speak several languages: Italian, French, German, Latin, and Greek. Her curriculum included mathematics, history of the constitution, conventional grammar, English literature, composition, and music. She was an avid reader, constantly familiarizing herself with classic novels, contemporary novels and poetry.

Florence was very involved in the arts. She participated in and even directed some theatre. Florence took piano and singing lessons in Italian, developing a love of the opera. Fond of dance, she never missed an opportunity to attend a ball with her family. Her wealth and formal education lead her vastly beyond a life of norms. Florence was adventurous and traveled extensively throughout Europe. Her life of luxury was forever changed by her visit to Geneva.

Florence encountered several Italian political refugees (during the strife of Austrian rule where resistance had begun). While discussing politics and economics, she quickly understood why they sacrificed poverty for their system of beliefs. As a result of Florence’s encounter with political opposition, she would be a partisan in active separatist movements thereafter.

Florence’s interest in nursing sparked at a young age. As a young child she pretended to nurse her dolls. After accompanying her mother to visit the underprivileged that were ill, she began to practice nursing technique on sick relatives, servants, and various people throughout the village. She refined her nursing skill in 1845 at a nearby hospital in Salisbury, England close to where she resided. Florence applied her acquired learnings to her village work. Her mother and sister were inherently unsupportive of this idea. Nursing fell beneath the family’s affluent standard, characterized as a profession that lacked skill. It favored the working-class woman who lacked job opportunity, therefor poorly compensated. Nurses were stereotyped as indecent, using coarse language and drinking heavily. Despite family opposition, Florence pressed on. She couldn’t deny her newly found calling. Florence used her permittance to travel to her advantage. Nightingale visited several hospitals becoming acquainted with many medical experts and nurses, in hopes of gathering as much information as possible. Through this acquired knowledge, she would then prove herself to be one of the most heroic and impactful women in history and healthcare.

On the verge of the Crimean War outbreak in 1854, Nightingale was invited by Sydney Herbert (Secretary of State at War) to conduct a team of nurses that would tend to all medically related war necessities. Prior to arrival, Florence gathered her team and additional supplies to assist them throughout this mission. Upon arrival at the hospital located in Scutari, Nightingale and her nurses found the soldiers in the most horrific of circumstances. Many were dying of infection due to unsanitary conditions, lack of care, and shortage of medicinal properties as well as other supplies. Florence worked tirelessly to organize and implement a plan of care, which included making nightly rounds giving her the title “The Lady with the Lamp.”

Throughout this process, Florence Nightingale developed her theory. She believed a sanitary and peaceful environment, healthy food, light, clean air and water were crucial to the reparative process of the ill and it was the caregivers’ responsibility and obligation to oversee the implementation of these necessities. With little respect, Nightingale insisted her team work solely under physicians’ orders in order to gain their cooperation. In the face of adversity, she showed great courage and spiritual strength. Relying on religious values, she maintained allegiance to the care of the soldiers. Her method proved to be effective and the mortality rate was eventually lowered. Florence’s concerns with sanitation in conjunction with self-reliant determination proved successful and unprecedented. Through her efforts, she gained unwavering admiration, appreciation, and recognition.

Florence Nightingale returned to England and was recognized as a heroine. From the outpour of gratitude, financial contributions were donated in her honor and used to establish educational healthcare programs devoted to the training of nurses. Florence nearly died from what was considered a form of typhus during the war. Upon her return from the Crimean War, Nightingale suffered from chronic brucellosis. Despite her illness, she became a consultant to several worldwide hospitals and facilities, providing structure and guidelines through the correspondence of reform. Her concerns and beliefs permeated throughout many of her writings including “Notes on Nursing.’’ Florence’s devotion to the progression of nursing mainly attributed to her vision on promoting health, preventative medicine, and the reformation of public healthcare.

In addition to her holistic approach, she also believed one’s own faith and spirituality was the sustenance of caring for others. Although medicine contributed to nursing, she felt there was an art to nursing. Nightingale believed a nurse must embody a spiritual awakening or calling and considered it to be a gift that couldn’t really be taught. She embraced her calling up until her time of death on August 10, 1910. Florence Nightingale’s legacy lives on.

Florence Nightingale: Theory Has Revolutionized the Profession of Nursing. (2020, Sep 05). Retrieved from https://studymoose.com/florence-nightingale-theory-has-revolutionized-the-profession-of-nursing-essay 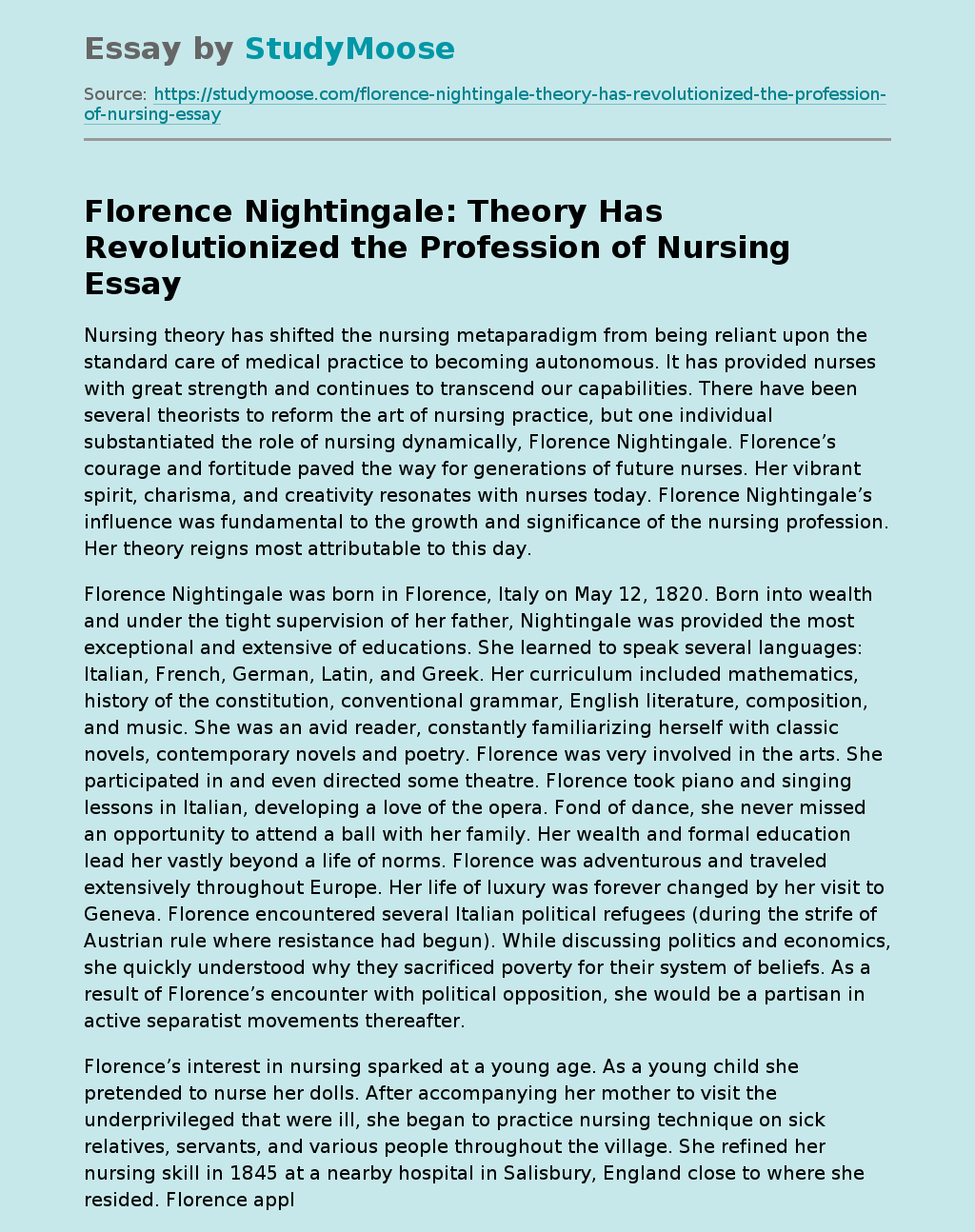