Medieval art covers a large scope of time. The period covered over 1000 years of art in Europe, Middle East and North Africa. The period was characterized by major art movements based on national art and regional art. There was also the aspect of revivals and artists crafts. Art historians have been successful in classifying medieval art into major periods and styles. This is often characterized with significant difficulty. The major periods of art in medieval period include, the early Christian art, the migration period art, the insular art, the Pre Romanesque art, and lastly the Romanesque art.

Don't use plagiarized sources. Get your custom essay on
“ Comparing Medieval Art to Renaissance Art ”
Get custom paper
NEW! smart matching with writer

Gothic art was also a prominent period on medieval art. In addition to these periods, each region which later became nations had its own distinct artistic style. Medieval art was basically produced in a large array of media (Veronica, 2008). The works have remained significant and large in number. They include illuminated manuscripts, stained glass, sculptures and mosaics. Paintings were also a common occurrence during this period.

Historians have pointed out that medieval art in Europe grew as a result of artistic heritage that highly influenced by the Roman Empire.

There is also an influence of iconographic traditions in this art period. It has been noted that these artistic source we mixed with what warfare to as barbarian artistic culture of northern Europe to provide excellent pieces of art. Byzantine art was one of the most influential arts during medieval time. This art form was basically influence by the Byzantine Empire and went on to be accepted in major areas.

From the period of the late antique in the medieval period, there emerged the Byzantine Art (Veronica, 2008). Although it basically originated from the catholic Europe, the art was embraced by all as a result of its originality. During the period of 730 to 843, there were a large number of icons that were destroyed and therefore very little remain today to present the originality of this era in medieval art.

From the medieval eras, there came prominent artist by the name of Michelangelo di Lodovico Buonarroti, commonly known as Michelangelo. The most famous piece by Michelangelo was his art work done on the Sistine Chapel in Rome: the scenes from Genesis on the ceiling and The Last Judgment in the altar wall. His works were inspired by the developments of the time. His works encompassed rhythm and contrast in a way that brought out the basic details of the artistic works. He used dull colors to reflect his somber mood while also embracing balance as a way of inspiring the generations. Most of his notable artistic works were influenced by color and balance.

Renaissance Art period is conceivably one of the utmost celebrated art periods in the history of mankind. The period was characterized by a wide array of disincentive artistic talent that put paint to work producing excellent results. Some of the notable artists of this period include Leonardo da Vinci, Robert camping, Santos Botticelli, Raphael and titian. There have been arguments in the artistic historical world whether the period was the best period in the history of art. Renaissance art originated from the renaissance period (Johnson, 2009). According to art historians, the period was characterized by sculpture, painting and decorative arts that formed the renaissance period in history. The period emerged with its distinct style in about 1400 parallel to developments in philosophical, literary and musical industries.

The period art is referred to as the rebirth of ancient traditions and has its roots in the classical antiquity. The period has transformed by the absorption of recent developments to give a different approach to art in the northern Europe through application of contemporary scientific knowledge. The renaissance art period was also characterized by the renaissance humanist philosophy that spread throughout the western history. This affects both the artists and the patrons of their works. There was a development of new techniques and also new artistic sensibilities. The renaissance period was basically the time from medieval period to early modern age. One of the most respected pieces of art of this period was the Last Supper by Leonardo da Vinci.

The artistic representation of the last supper has been addressed as one of the unsurpassed in the history of mankind. This has given Leonardo da Vinci an upper hand among his peers of the renaissance period. The absorption of recent developments in the early modern age characterized a radical shift in renaissance art. It is believed that this change of tact formed the basis for the new approach on the aspect of artistic representation of ideas. Historical facts show that early renaissance art was infarct produced parallel with the late medieval art. By 1500, the renaissance part was declared the better of the time thereby prevailing over the late medieval art. The late renaissance art was later called mannerisms and developed to become a fully fledge artists pattern. This pattern took distinctive attributes of each region and merged them together (Johnson, 2009). The proto renaissance period was basically I Italy and ran from 1280 to 1400.

By the late 14th century, Italy had already been introduced to the new version of the renaissance era. That period was characte4rise by outstanding arts like the sculpture of Nicola Pisano and also Giovanna Pisano. There was a major development in figurative painting where precedence was set on naturalistic and three dimensional approaches that classified the classics it into different categories (Charles, 2009). The period was viewed as aim of classifying and rebirth of art from different perspectives. Leonardo da Vinci work captured all the major aspect of art including color, balance rhythm and balance. He used bright colors in his trademark works including the Last Supper. The use of bright colors was restricted to the foreground on f the pictures while the background was characterized by dark colors.

In conclusion, there was an aspect of balance in both periods as they seek to balance different occasions with specific colors. There is a major understanding that both works have a similar approach to balance. The use of rhythm in the latest installations of these works in the periods offered a new way of understanding art. The two periods have emphasized on the need to build themes based on the current issues of the time. 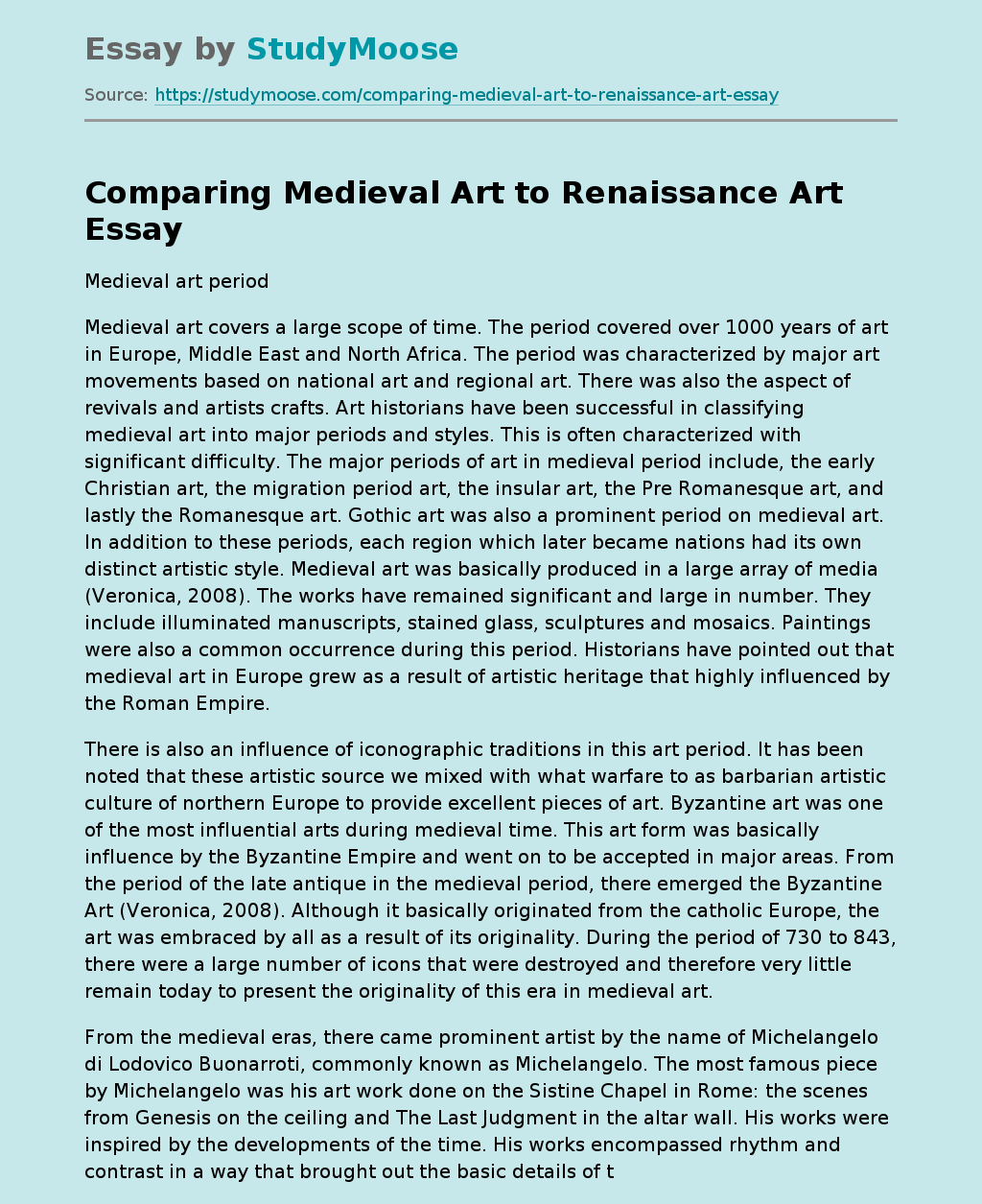