How did the Renaissance change man’s view of man?

How Did The Renaissance Change Europe

Don't use plagiarized sources.
Get Your Custom Essay on How did the Renaissance change man’s view of man? Just from $13,9/Page

The Renaissance was changed by art, literature, and science.

How Did Art Change During The Renaissance

Man’s view of man was changed due to the new style of art. In document A it compared two different paintings from two different time period to compare the different types of style art styles. In source one the painting “Madonna Enthroned Between two Angles”, by Duccio di Buoninsegna (Doc A), was done in a religious matter of what the church had wanted.

The second source was the “Mona Lisa”, by Leonardo Da Vinci (Doc A), which showed a new type of art style which showed landscapes and three-dimensional figures. Art changed man’s view of man by showing new types of styles and artistic freedom.

Man’s view of man changed during the Renaissance could be through literature. For example in source two, in the play Hamlet, William Shakespeare wrote “in apprehension how like a god!” (Doc B). During the Renaissance people were viewed as god/angel-like creatures or as works of art. People were now starting to think that they were beautiful people. In source one, in Every Man, the author wrote, “Ye [ man ] think sin in beginning full sweet” (Doc B). In the Middle Ages humans were considered to be sinners, and how we were created by god. People were becoming god himself from creations that sin. Literature changed man’s view of man by telling people they were beautiful and god-like.

Thankfully due to reason the church couldn’t kill people, because they knew they were wrong. Astronomy changed man’s view of man by loosening the Church’s grip on people. Man’s view on man changed due to art, literature, and astronomy. Although people have a right to believing in what they want and I know it’s hard to believing in something new after you spend most of your life with it. Still people have a right to believe in what they want and the church was stopping that. People should care about this because helps understand the past and present.

How did the Renaissance change man’s view of man?. (2016, May 10). Retrieved from https://studymoose.com/how-did-the-renaissance-change-mans-view-of-man-essay 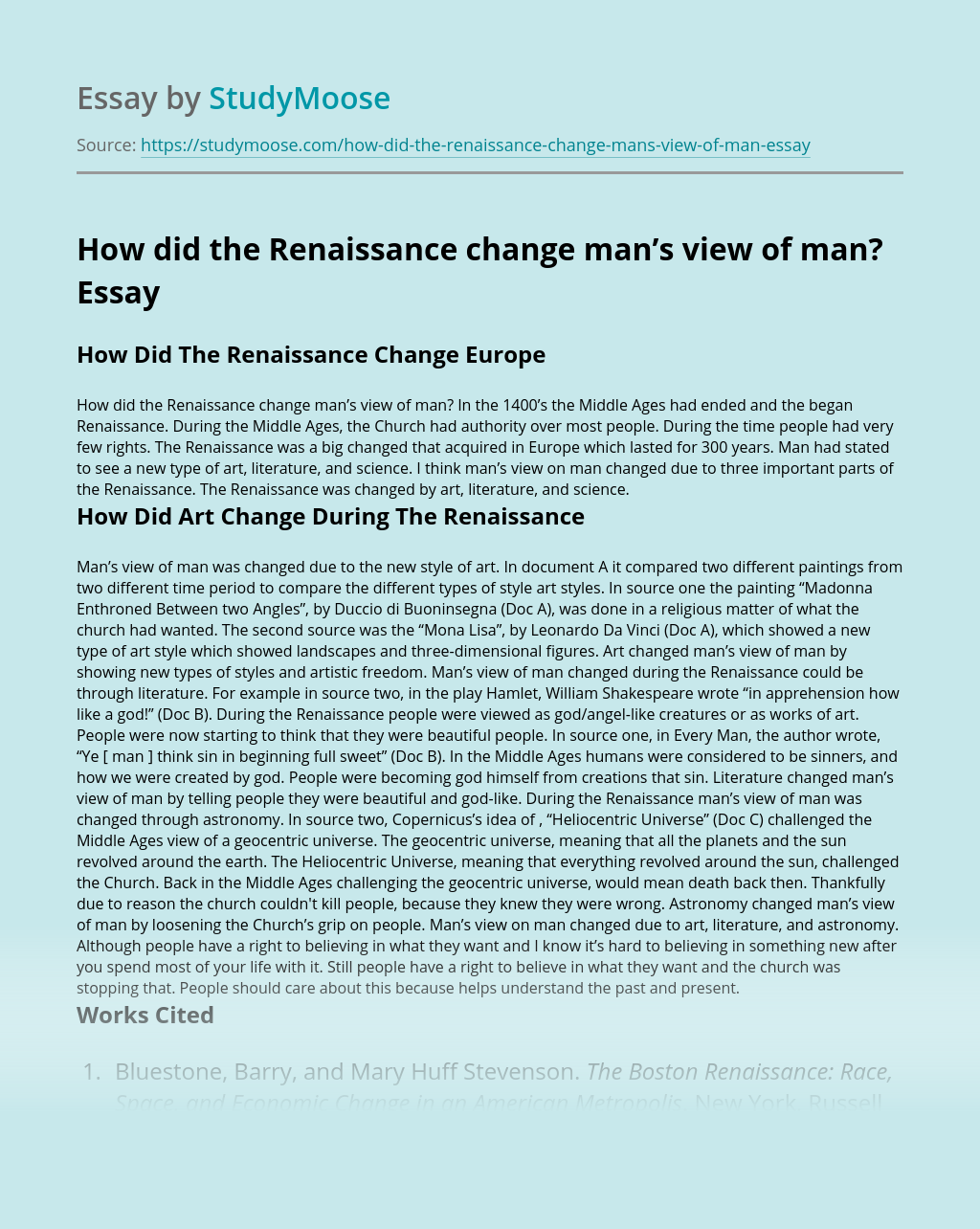 This traditional thinking of education as the ticket to the good life emerges in different ways and degrees in Bangladesh. Education is seen as something that is received rather than achieved and it has increasingly become dependent on certificates. Education in the largest sense is any act or experience that has a formative effect on...

General Description Disston Elementary School, located at Knorr and Cottage Streets, in the Tacony/Wissinoming neighborhood of Philadelphia, is a four-story brick building. The school, K through 8, has a gym, auditorium, and library. There is also a computer lab, consumer education classroom, and a music room. The floors are organized by grade levels, starting with...

Get Essay
"Is Google Making Us Stupid?"

Google is making us smarter as we re-discover new ways to learn. In “Is Google Making Us Supid?” Nicholas Carr argues his profound concern on the use of the Internet and how it is affecting our brains. Carr’s main argument is that the Internet may well have damaging effects on cognition while reading; that would...

Even thought the world is witnessing a sustainable improvement in all fields such as science and technology, it is still facing several problems that keep blocking it from improvement. One such problem is overpopulation that affects our life in many ways. Overpopulation generates three major effects: economy decline, environment downfall, and educational system decline. The...

TDA 2.6 HELP IMPROVE OWN AND TEAM PRACTICE IN SCHOOLS 3.1 Describe why team work is important in schools. Effective teamwork among the school staff is very important as it ensures the smooth running of school. It shows that the school has a common purpose; i.e. to achieve the targets and provide the support required...