Leonardo da Vinci was inarguably a great mind of the Renaissance, a period of European civilisation where revival of classical learning and wisdom took place after a long period of cultural decline and stagnation. He was an Italian painter, draftsman, sculptor, architect, and engineer whose talents reflected the diversity of achievements of the Italian Renaissance. With his outstanding versatility, Leonardo has often been described as a universal genius of the Renaissance, the fame that has remained undimmed as a result of his great desire for knowledge.

Don't use plagiarized sources. Get your custom essay on
“ Leonardo Da Vinci ”
Get custom paper
NEW! smart matching with writer

His Last Supper and Mona Lisa are among the most widely popular and influential paintings of the Renaissance, and they gained worldwide fame only after his death. However, he was far from prolific, as only 17 of his paintings, many of which remained unfinished, have been identified. In addition to art, Leonardo studied a wide range of scientific topics including anatomy, geology, botany, hydraulics and aerodynamics.

His science was expressed through art, and his drawings and diagrammes show how he understood the world.

Leonardo used an observational approach to study science. In this approach, he considered his eyes to be his main avenue to knowledge, and sight alone could convey the facts of experience immediately and correctly. Leonardo also considered a painter as the person best qualified to achieve true knowledge because he could closely observe, understand and then carefully reproduce the world around him through art. Leonardo once said, “Whatever exists in the universe, a painter has first in his mind and then in his hands.

” In addition to Leonardo’s unique approach and concept, his superb intellect and mastery of the art of drawing to study nature itself allowed his dual pursuits of art and science to develop.

Leonardo’s scientific and technical observations are found in his handwritten notebooks or manuscripts, the greatest literary legacy he left to the world. The notebooks also equal the importance of his paintings as the pages reveal his inventions of machines such as the bicycle, airplane, helicopter and parachute. His findings of anatomy, which were among the most significant achievements of the Renaissance science, are also portrayed in the famous anatomical drawings in the notebooks. Leonardo also shared his thoughts on the nature of painting which has become a contribution to later generations of artists. More interestingly, what he wrote and sketched also gave an insight into his approach to life because in these notebooks, he also wrote his grocery lists and even the names of his debtors.One special feature that makes Leonardo’s notes and sketches unusual is his use of mirror writing. The handwriting is so peculiar that the task of deciphering the notes would require great effort. The aid of a mirror in reading reversed handwriting appears to be available only for the first experimental reading.

The persistent use of it is impractical, considering the enormous mass of manuscripts to be read. Leonardo’s handwriting, which runs from right to left in inseparable writing, is illegible, and this unusualness in the writing is not the only obstacle in mastering the text. Leonardo also joined several short words into a long one or divided a long word into two short words. This arbitrary way of writing is not aided by punctuation to regulate the division and construction of the sentences; therefore, it is not surprising that some attempts to understand Leonardo’s handwriting would fail. Why was such odd handwriting used by Leonardo? Although a popular belief is that Leonardo intended some amount of secrecy, it might also be due to Leonardo’s left-handedness. Another unusual feature in Leonardo’s manuscripts is the relationship between words and pictures. As Leonardo emphasised, drawings are superior to words. Leonardo strove passionately for a language that was clear yet expressive.

The wealth of his vocabulary was the result of intense study on his own and represented a significant contribution to the development of scientific terms in the Italian language. Despite his articulateness, Leonardo gave absolute preference to the drawing over the written word in his own approach. The drawing does not illustrate the text; rather, the text serves to explain the drawing. Leonardo’s work was a pioneer of modern scientific illustration. His notebooks reveal a spirit of scientific inquiry and a mechanical inventiveness that were centuries ahead of their time. However, he neither taught nor published his findings, and almost none of his inventions were built during his lifetime.

If his work had been published in an intelligible form which others were able to understand, Leonardo’s place as a pioneering scientist would not be questioned. If his inventions had been built, they might have revolutionised the history of technology. The wealth of Leonardo’s anatomical studies that have survived also shapes the basic principles of modern scientific illustration. From observing the static structure of the human body, Leonardo continued to study the role of individual parts of the body in mechanical activity.

He drew parts of the human body in three-dimensional diagrammes. He became the first person to accurately draw a child in the womb. His aim was to record the birth, life, and death of man in his Treatise on Anatomy which begun in 1489. However, his work was never published. 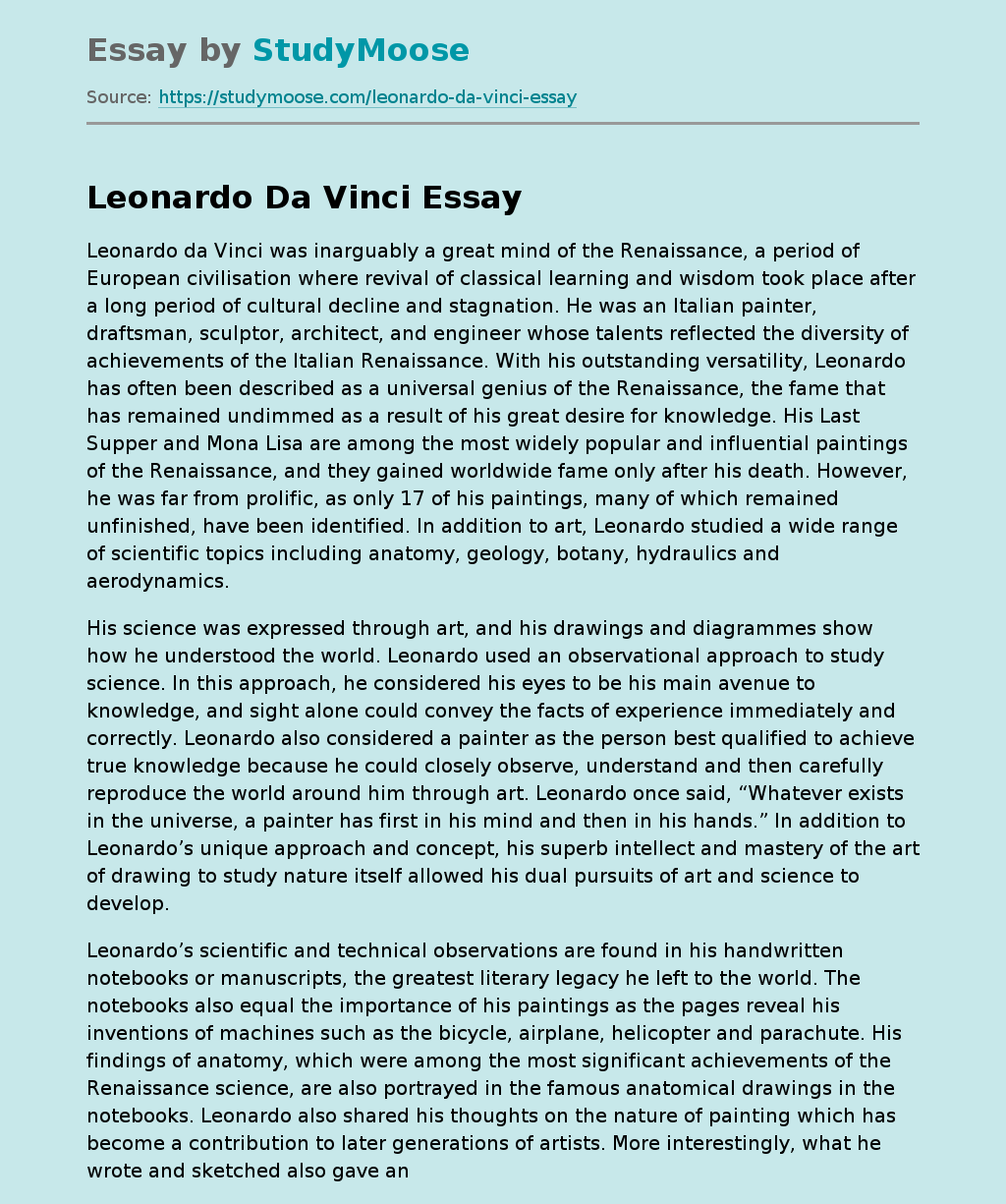