Reflection of the Roman Empire

I consider the Roman Empire as one of the huge part of the history of mankind. The Romans contributed on many aspects, including the politics, policy, entertainment, architecture, sculpture, poetry, principles, sports, arts and painting, norms, culture and laws. Most of their contributions and legacies are being studied today. Their good leaders/emperors serve as the model for our public servants. The Romans excel on different fields. The most important thing that they had started is the Catholicism ( even though I’m not a catholic I appreciated it).

Don't use plagiarized sources.
Get Your Custom Essay on Reflection of the Roman Empire Just from $13,9/Page

The good leaders has striven for transformations and reforms. In 27 B.C., Gaius Julius Caesar Octavianus was awarded the honorific title of Augustus by a decree of the Senate. So began the Roman empire and the principate of the Julio-Claudians: Augustus (r. 27 B.C.–14 A.D.), Tiberius (r. 14–37 A.D.), Gaius Germanicus, known as Caligula (r. 37–41 A.D.), Claudius (r. 41–54 A.D.), and Nero (r. 54–68 A.D.). The Julio-Claudians, Roman nobles with an impressive ancestry, maintained Republican ideals and wished to involve the Senate and other Roman aristocrats in the government.

This, however, eventually led to a decline in the power of the Senate and the extension of imperial control through equestrian officers and imperial freedmen. Peace and prosperity were maintained in the provinces and foreign policy, especially under Augustus and Tiberius, relied more on diplomacy than military force.

With its borders secure and a stable central government, the Roman empire enjoyed a period of prosperity, technological advance, great achievements in the arts, and flourishing trade and commerce. Under Caligula, much time and revenues were devoted to extravagant games and spectacles, while under Claudius, the empire—and especially Italy and Rome itself—benefited from the emperor’s administrative reforms and enthusiasm for public works programs. Imperial expansion brought about colonization, urbanization, and extension of Roman citizenship in the provinces. The succeeding emperor, Nero, was a connoisseur and patron of the arts. He also extended the frontiers of the empire, but antagonized the upper class and failed to hold the loyalty of the Roman legions. Amid rebellion and civil war, the Julio-Claudian dynasty “came to an inglorious end with Nero’s suicide in 68 A.D.”

With its borders secure and a stable central government, the Roman empire enjoyed a period of prosperity, technological advance, great achievements in the arts, and flourishing trade and commerce.The succeeding period is known as the age of the “Five Good Emperors”: Nerva , Trajan , Hadrian, Antoninus Pius , and Marcus Aurelius. It was a time when the distinction between provincials and Romans diminished as a greater number of emperors, senators, citizens, and soldiers came from provincial backgrounds and Italians no longer dominated the empire. Successors to the emperor were chosen from men of tried ability, and not according to the dynastic principle. Trajan was the first Roman not born in Italy to become emperor; his family came from Spain. He had a distinguished military career before being elevated to the purple by Nerva.

Under Trajan, along with consolidation of the empire, great efforts were expended on wars of conquest in Dacia and Parthia. His accession ushered in an era of confidence unattested since the reign of Augustus. Trade and commerce flourished between the Roman empire and its northern and eastern neighbors. The provinces thrived and local aristocrats spent lavish sums on their cities. Latin literature flourished with the works of influential writers such as Martial, Juvenal, Tacitus, Suetonius, and Pliny the Younger, but at the same time a growing provincial influence was felt in every sphere, especially religion and sculpture. Under Trajan and Hadrian, new cities were founded and vast building programs initiated.

The Roman Empire has taught me a lot. Their contributions are use throughout the world today. Their rich culture and arts are being preserved. The beauty of Rome architecture are imitated by the present architect. The most important contribution of them are the Catholicism together with the churches.

Reflection of the Roman Empire. (2017, Jan 09). Retrieved from https://studymoose.com/reflection-of-the-roman-empire-essay 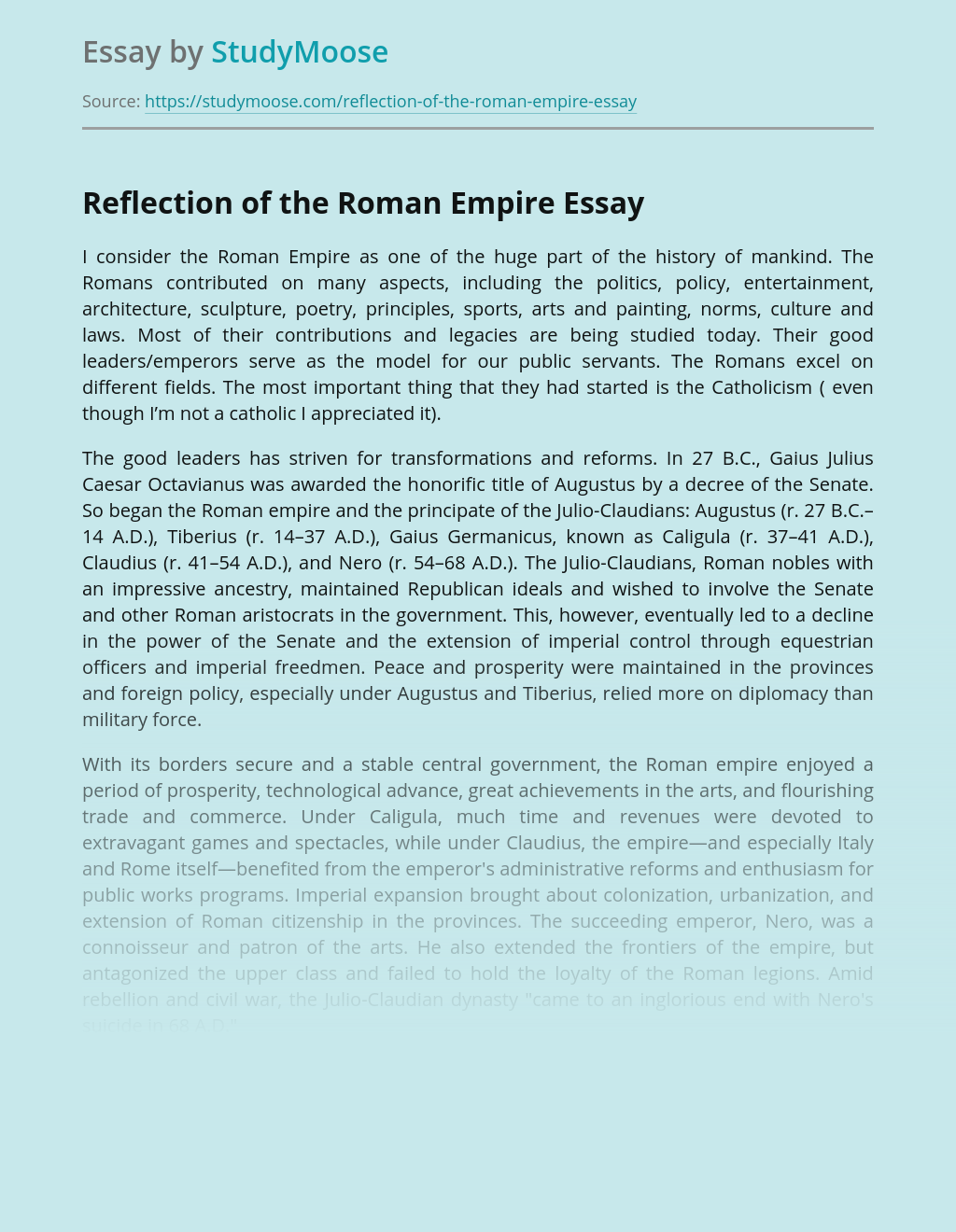 English as a global language

Crystal begin “ English as a Global Language” by asking what means for a language to be global ,and what the advantages and disadvantages of having a global language. There is no official definition of “global” or “world” language, but it essentially refers to a language that is learned and spoken internationally, and is characterized...

Structure is a huge invovlement to the egg surviving the fall from the top of the stadium. You have to have a structure that will absorb the impact of the fall without putting it into the egg. We constructed a cube. In this cube we constructed had many shapes but we tried to stay with...

Brief Summary of Novel The novel Sold tells the story of a girl named Lakshmi from Nepal, who is sold into sexual slavery in India.When the harsh Himalayan monsoons wash away all that remains of the family’s crops, Lakshmi’s stepfather says she must leave home and take a job to support her family. She is...