Differences between the Spanish and Ottoman empires

During the time period from 1450 to 1800, two powerful empires were in the process of being built. These two empires were the Ottoman Empire and the Spanish Empire. During the building process of their empires, the Ottoman and the Spanish both developed many similarities in their political, social, and economic affairs. A similarity between these empires was that they both had some type of slave system. Even though they did have some things in common there were also many differences that were between these empires.

Don't use plagiarized sources. Get your custom essay on
“ Differences between the Spanish and Ottoman empires ”
Get custom paper
NEW! smart matching with writer

Some differences between these two were that the Ottomans had the devshirme slave system and the Spanish had the encomienda system. The devshirme system was the practice in which the Ottomans recruited and then forcibly took Christian boys from their families and put them in Ottoman society. These Christian boys were called Janissaries. The Janissaries were converted to Islam and trained so that they could obtain a high position in society such as being a military leader or a high administrator.

The reason for this system was that the Ottomans wanted to have the most able men trained to lead the empire. The encomienda system was a practice employed by the Spanish during the colonization of the Americas. It was used to regulate Native American labor. In this system, Spanish-Americans were given grants from Spain for which they had to take care of a certain number of Native Americans. These men that were given grants were instructed to teach the natives the Spanish language and convert them to Christianity.

In return, these men were allowed to take tribute from the natives in the form of labor and gold. This system was alike to the devshirme system because the Native Americans and the Janissaries were both converted to the religion of the empires that they were living under. During this time period this was done because religion was one of the most important aspects of many societies. One of the most important similarities between the Ottoman and the Spanish empires were their slave systems.

A major difference for most people between the Ottoman Empire and the Spanish Empire was in their types of trade. The Ottoman Empire focused strictly on land based trade, while the Spanish Empire focused mainly on sea based trade. This strict land based trade from the Ottomans was a factor as to why they later declined. This is because only trading by land greatly limits the amount of trade that can go on in the empire. Especially during a time when sea based trade begins to increase greatly in the rest of the world. The sea based trade that was used by the Spanish helped their empire due to the fact that this type of trade flourished for them. The Spanish settled in the Americas and began what is now known as the Columbian exchange. This was a widespread trade of animals, plants, and slaves. This trade greatly benefited Spain’s economy and it helped them become one of the most powerful nations of the time. The Ottoman Empire was a strict land based empire, while the Spanish Empire had both land and sea based trade, which helped them economically flourish. The different types of trade used by the empires were one of the biggest differences between them.

The Ottoman and the Spanish empires certainly had their fair share of similarities and differences. Whether it was between trade, religion, or even their slaves. Still, they were both considerably powerful and influenced the areas around them. Which is also another similarity between the two of them.

Differences between the Spanish and Ottoman empires. (2016, Mar 19). Retrieved from https://studymoose.com/ottoman-vs-spanish-empire-essay 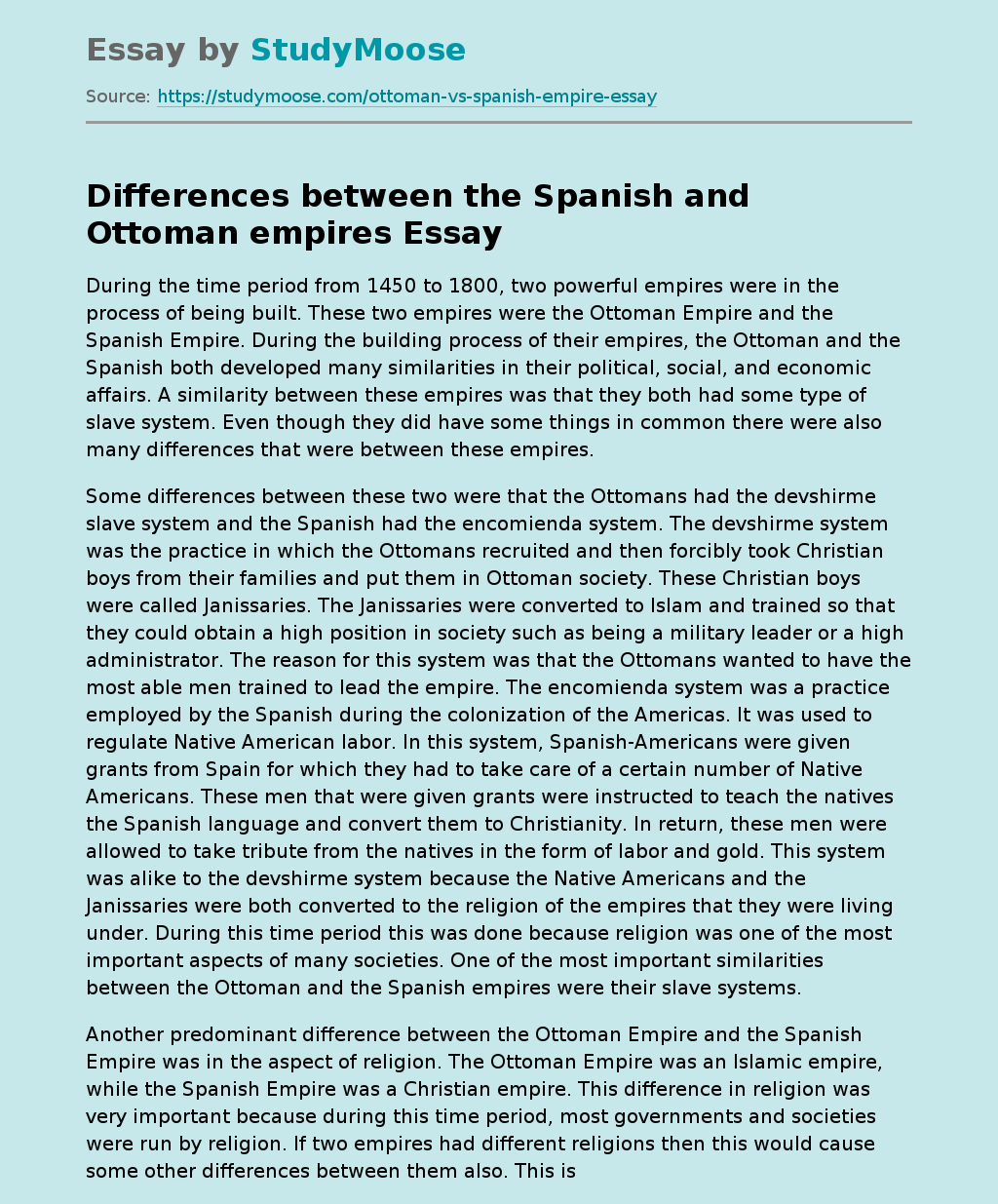