Compare the experience of the French, Spanish and English

Compare the experience of the French, Spanish and English in colonizing New World, What common perception of the region did they share? Discuss difference in their relationship with Native Americans. The history of colonial North America centers primarily on the struggle of England, Spanish, and France to gain control of the continent. Settlers crossed the Atlantic for different reasons, and their governments took different approaches to their colonizing efforts. These differences created both advantages and disadvantages that affected the New World’s fate.

Don't use plagiarized sources. Get your custom essay on
“ Compare the experience of the French, Spanish and English ”
Get custom paper
NEW! smart matching with writer

The countries government and values reflected their methods and means of making the New World work to their benefit. All of the countries were driven by such motives as treasure, gold, silver, and religious freedom. Also, interactions among Europeans and Native Americans varied from place to place, and members of each nation forged relationships with Indians in very different ways, depending on a variety of economic, social and political factors. Spain is the most powerful monarchy in Europe and the Americas, wished to enrich themselves with the New World’s natural resources.

They were not interested in creating a permanent society in the New World. Rather, they came for instant wealth, preferably in gold. For a quarter century, the conquistadores concentrated their energies on the major islands that Columbus had discovered.

Rumors of fabulous wealth aroused the interest of many Spaniards including Cortes, a minor government functionary in Cuba. Like other members of his class he dreamed of glory, military adventure, and riches that would transfer him from court clerk into honored hidalgo.

He believed that somewhere hidden there placed great cities of golden treasure. What he did not look forward to encountering were the native of the land, the Aztecs. Upon their first encounter a battle broke out that was initially won by the tribal natives but ended up introducing the Aztecs to the most devastating of weapons– biological warfare. The Indians were stricken with smallpox which weakened their forces just enough so that Spain was able to seize control of the native nation. To the Indians the Spanish became known as a “brutal” enemy. The conquistadors and local officials formed the encomienda system, which cruelly exploited local Native Americans. By the beginning of the seventeenth century, over two hundred thousand Europeans had arrived in the New World. The majority were Spanish, who had over one hundred and twenty five thousand African slaves working under them.

Most colonists were single males. Since few Spanish women migrated, the men often married Indians and blacks, unions which produced mestizos and mulattos. The Spanish also brought Catholicism to the New World. The French first came to the New World as explorers, seeking a route to the Pacific Ocean and wealth. Major French exploration of North America began under the rule of Francis I, King of France. In 1524, Francis sent Giovanni da Verrazano to find a shorter water route to China, via Northwest Passage around or through North America. In 1534, the king sent Cartier on a similar quest. He explored the Gulf of Saint Lawrence, but did not get closer to China. And 65 years later Samuel de Champlain founded Quebec for France. As was with other powers, the French migrated to the New World in search of wealth as well as in hopes of converting the Indians to Christianity. The French viewed the Native Americans as necessary economic partners. Furs were Canada’s most valuable export, and to obtain the pelts of beaver and other animals, the French were absolutely dependent on Indian hunters and trappers.

French traders and missionaries lived among the Indians, often taking native wives and studying local culture. Unlike the Spanish, England decided to settle up north. The first English settlement became known as Jamestown which was in modern-day Virginia. Also unlike the Spanish, the English tried to make the natives that they encountered assimilate into their culture. They judged them as barbarians, but they did not make war with them or try to eliminate them. Instead, they believed in creating a “rigid separation” between them and the native peoples. They isolated their new societies from the Indians unlike the Spanish who captured them and retained the natives as slaves. Other places along the eastern coast as far north as Newfoundland ended up being settled by merchants as well as other interested in taking advantage of the natural resources that existed in America. The first lasting English colonies were able to be settled because of its great wealth of fish, trees, and arable land, and these led to become very successful settlements.

Compare the experience of the French, Spanish and English. (2016, Apr 07). Retrieved from https://studymoose.com/compare-the-experience-of-the-french-spanish-and-english-essay 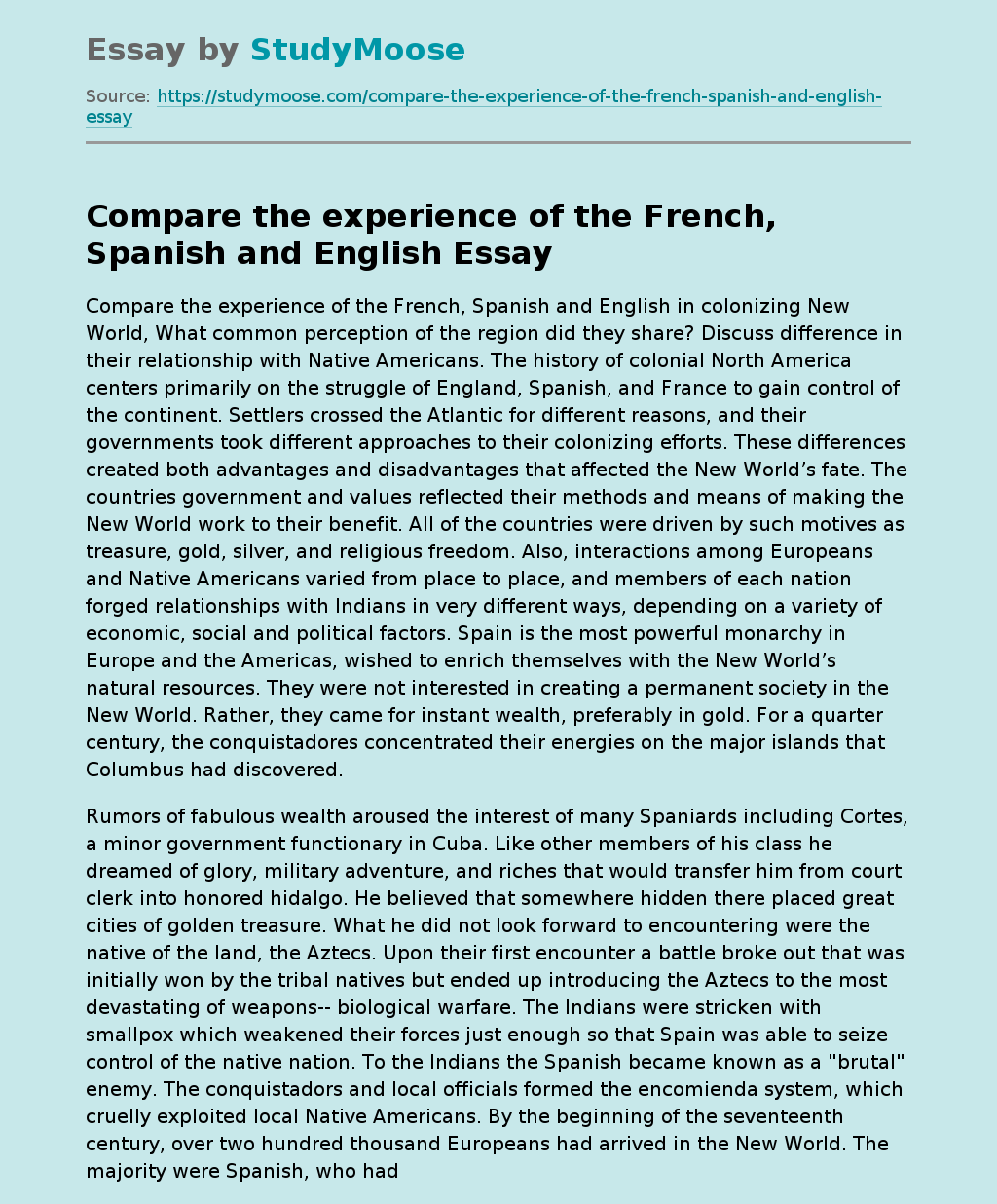