The Contrast of French and Spanish Missionaries

“Ethical religion can be real only to those who are engaged in ceaseless efforts at moral improvement. By moving upward we acquire faith in an upward movement, without limit.” (Felix Adler (1851-1933), American educator)

Turn in your highest-quality paper
Get a qualified writer to help you with
“ The Contrast of French and Spanish Missionaries ”
Get high-quality paper
NEW! AI matching with writer

The relationships shared between these missionaries and the Native Americans were an essential part of successful evangelization.

During the Spanish colonization and expansionism the monarch funded the churches to sear out possible evangelization and development of ecclesiastical establishments in the new world. The monarchs believed that the conversion to the Christian creed in the new world would be the stepping stone to establishing unionized Christianity, in the Spaniards case it was the preservation of Catholic creed.

Proficient in: Angels In America

One of the areas which the Spanish missionaries hoped to find opportunity of evangelization was in New Mexico. There they found the villages of Pueblo Indians. According to Winthrop S. Hudson, the Franciscans portrayed them selves as a superior and wonder-works in order to get the respect as authorities from the Indians by staging dramatic plays in which the Indian greets the priest by kissing his feet.

By acquiring authority over them it made the processes of creating a strict flame work of Christian moral behavior easier to force onto the Pueblos.

They believed that through monitoring and accommodations of their behavior it will reach their soul. These modifications were made especially in sexual behaviors and marriage. However, the dominance and aggression of the Spaniards has created negative results, followed by the revolts from the Indians. It is ironical that the Spaniards once again face conflict in imperialism because they attempted a new method, which believed to be different from the past methods lead by the conquistadors. In reality their role of ethnocentrism and brutality is repeated.

The methods in which the French missionaries performed their evangelization differed from the Spaniards. Instead of behavior modification and brutal tactics they approached the Indians with knowledge of their culture and language. As Jean de Brebeuf, another of the North American Martyrs, explained to his colleagues in 1637, “You must have sincere affection for the Savages, looking upon them as ransomed by the blood of the Son of God, and as our brethren with whom we are to pass the rest of our lives.” This was not a simple procedure when it came to interpretation of biblical myths and faith because there were no dictionaries or language contents that they can study.

Most of the language was learned through the body language and expressions of verbal communications . And this attempt was reworded by the Indians respectful replies; according to one of the missionaries report “…the Iroquois commenced their reply by singing songs of welcome to the French, Whom they invited to remain and instruct the people in the faith, giving them full liberty to enter their villages and their homes, or wheresoever duty called them.” After establishing this relationships with the Indians the French provided educations for the Indians to further pursue their mission. An example of this success is well illustrated in the journal written by Carlo Krieger. He quotes that “… he noticed Micmac children taking notes on charcoals on birch bark in order to better memorize a prayer which he had taught them.”

Even though there were differences in the methods which the Spaniards and French used for evangelization, their goals were the same. Through these missions they believed to spread the Christian creed to attain their eternal salvation. They both had the idea that the Native Americans were in need of guidance in order for them to have a civilized society. Eventually their methods merged into one method which is the concept of synchronizing the native culture and beliefs with Christianity. And these remains of synchronized religion are still existent today.

In words of Joan Wester Anderson, “We can all be angels to one another. We can choose to obey the still small stirring within, the little whisper that says, “Go. Ask. Reach out. Be an answer to someone’s plea. You have a part to play. Have faith.” We can decide to risk that He is indeed there, watching, caring, cherishing us as we love and accept love. The world will be a better place for it. And wherever they are, the angels will dance.” (Joan Wester Anderson (b. 1938), [Jeanne Anders] American writer, author) With sincerity and communication I believe that process of evangelization is more efficient. Their procedure differed in the sense of aggressiveness and their goals were the same when it came to spreading Christianity and acquiring their salvation.

“Perhaps maybe the question lies in the area of faith?”To have faith is to be sure of the things we hope for, to be certain of the things we cannot see. It was by their faith that people of ancient times won God’s approval.” (Hebrews 11:1-2 Bible (15th-16th century), (First known English translation from the Latin) who are they to question the other culture and religion as none civilized? After all were they so civilized and advance when they used brutality and enslavements against the Native Americans? And were they so indulged with knowledge that they can question their faith and prove that their religion is inferior?

Thus, I believe the progression of methods in which negotiation and understanding of the others language and culture has affected the achievement of evangelization, indicating that the foundations of their relationship was essential.

The Contrast of French and Spanish Missionaries. (2016, Jun 20). Retrieved from https://studymoose.com/the-contrast-of-french-and-spanish-missionaries-essay 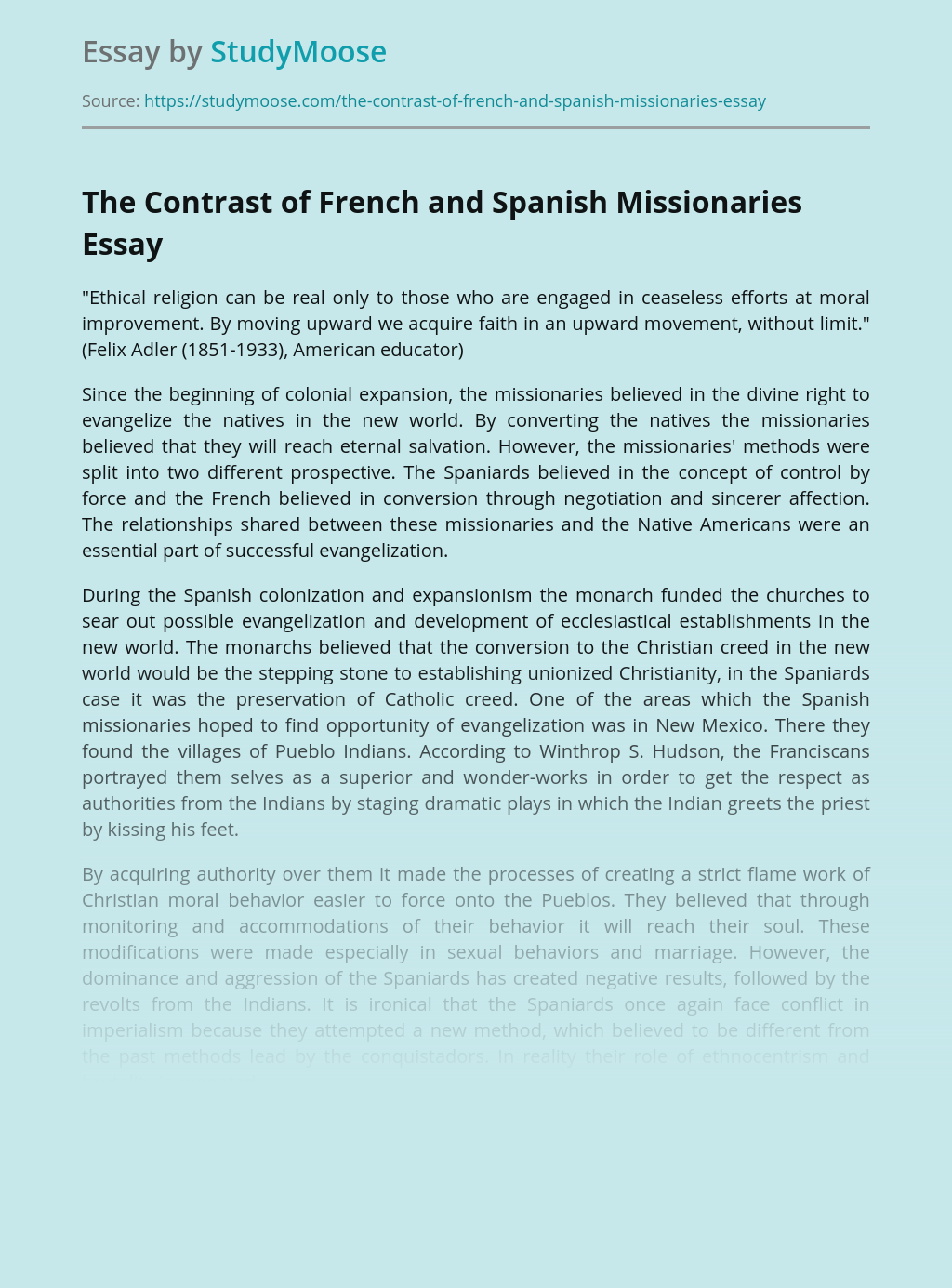 Turn in your highest-quality paper
Get a qualified writer to help you with
“ The Contrast of French and Spanish Missionaries ”
Get high-quality paper
Helping students since 2015
Stay Safe, Stay Original