The fall of Umuofia in "Things Fall Apart" by Chinua Achebe

Christianity, in its entirety, is the largest religion in the world and continues to seek converts everyday. In Chinua Achebes Things Fall Apart, Mr. Brown and Mr. Smith play the role of white missionaries who share that exact goal: to convert the natives of Umoufia into Christianity. However, the strict and uncompromising methods of Mr. Smith conflicts with those of Mr. Brown, who can be described as serene and peaceful. These opposing approaches take a part in the chaos that emerges and understanding their roles in Igbo society can help readers determine who is primarily responsible for the fall of Umoufia.

Don't use plagiarized sources. Get your custom essay on
“ The fall of Umuofia in “Things Fall Apart” by Chinua Achebe ”
Get custom paper
NEW! smart matching with writer

As one of the first missionaries in Umuofia, Mr. Brown realized that a frontal attack on the clan would not succeed (166) and he spread his Christian views in a peaceful and affable manner. This brought him great respect from the people of the clan. In fact, he was even presented with a carved elephant tusk, which was a sign of great dignity and rank (164). This gift symbolizes the villagers approval of him and possibly of the Christian religion.

From this position, he was able to open a hospital and a school which brought many new converts; the awareness that those who attended Mr.

Browns school would learn how to read and write and the distribution of generous gifts of singlets and towels (166) attracted many people to enroll into the school. All in all, Mr. Brown uses his passive mind-set to convert the natives to Christianity. This is unlike the strict and uncompromising Mr. Smith, who harshly imposes his religion upon the natives and allows for no error in the comprehension of Christian beliefs. As the replacement for the unhealthy Mr. Brown, Mr. Smith condemned openly Mr. Browns policy of compromise and accommodation (169).

He assumed that Mr. Brown was interested in nothing but numbers (169). Believing Narrow is the way and few the number, he quickly becomes distressed by the ignorance which many of his flock showed toward Christianity (169) and rather than converting Umuofians, Mr. Smith actually suspends one of the converts. Not to mention, he wasnt able to form beneficial relationships with the clan in the way Mr. Brown has done. Therefore, Mr. Smith is unlike Mr. Brown in the way he is successful converting the Umuofians and gaining influence in the clan.

When Mr. Brown first arrived in Umoufia, he not only had to promote Christianity and its views but he also was faced with the native beliefs of the Umuofians. The manner used by Mr. Brown and Mr. Smith toward native beliefs was decisive in how Christianity was perceived by the Umuofians. Mr. Brown was aware of this because he was very firm in restraining his flock from provoking the wrath of the clan (163). Right from the beginning he made friends with some of the great men of the clan (163) which positively affected the opinions of the natives toward Christianity. One of these friends was Akunna, who talked with Mr. Brown frequently about each others faiths through an interpreter. These discussions provided Mr. Brown with information about the religion of the clan and allowed him to conclude what actions he should take. It was indeed this info that encouraged him to create a school and a hospital because he knew that if he appealed to the natives and worked with their belief system, rather than against, he could easily win them over to Christianity.

That is exactly what he did and if it wasnt for his poor health to cause him to leave, Mr. Brown wouldve most probably accomplished the goal he set out. On the other hand, Mr. Smith couldnt pick up where Mr. Brown left off; he disagreed with the way Mr. Brown converted the natives because they knew little of his religion and kept some of their old customs. An example of this intolerance toward clan customs is expressed when he hears that a child of a convert is declared an ogbanje, plaguing its mother by dying and entering her womb to be born again (170). This indigenous myth, in his opinion, was spread by the Devil to lead men astray (170). His rejection of native beliefs is a result of close-mindedness toward religion and causes him to be filled with wrath (170), thus suspending the woman from the church. Another example of Mr. Smith being bigoted toward religious customs is shown in the case of Enoch, an over-zealous convert (170).

During the annual ceremony which was held in honor of the earth deity (171), the egwugwu, a group of masqueraders who impersonate the ancestral spirits of the village, have allowed the Christian women whove gone to church to go home. Although they were already starting to withdraw, Enoch swanks aloud that they wouldnt dare touch a Christian whereupon they all came back and one of them gave Enoch a good stroke the cane (171). Enoch rips of his mask, which in Umuofia is equal to killing the ancestral spirit. The next day, the egwugwu burned the church to the ground. If they havent liked his brother (175), they would have harmed Mr. Smith as well. These examples prove that Mr. Smiths rejection and prejudiced approach toward the Umuofian customs caused the Umuofians to abandon their peaceful ways, which is shown by the burning of the church, thus disapproving Christianity.

Primarily, Mr. Brown is to blame for the downfall of Umuofia. He was able to socially connect with the Umuofians, as if he was on their side. The relationships he made with the natives supplied him with the status he needed to appear likable and genial. However, it was their own foolishness that conclusively brought the fall of Umuofia; to think Mr. Brown had good intentions was critically false because in the end, both missionaries wanted the same cruel thing. Therefore, the naive Umuofians brought the end to themselves.

The fall of Umuofia in "Things Fall Apart" by Chinua Achebe. (2016, Jul 28). Retrieved from https://studymoose.com/the-fall-of-umuofia-in-things-fall-apart-by-chinua-achebe-essay 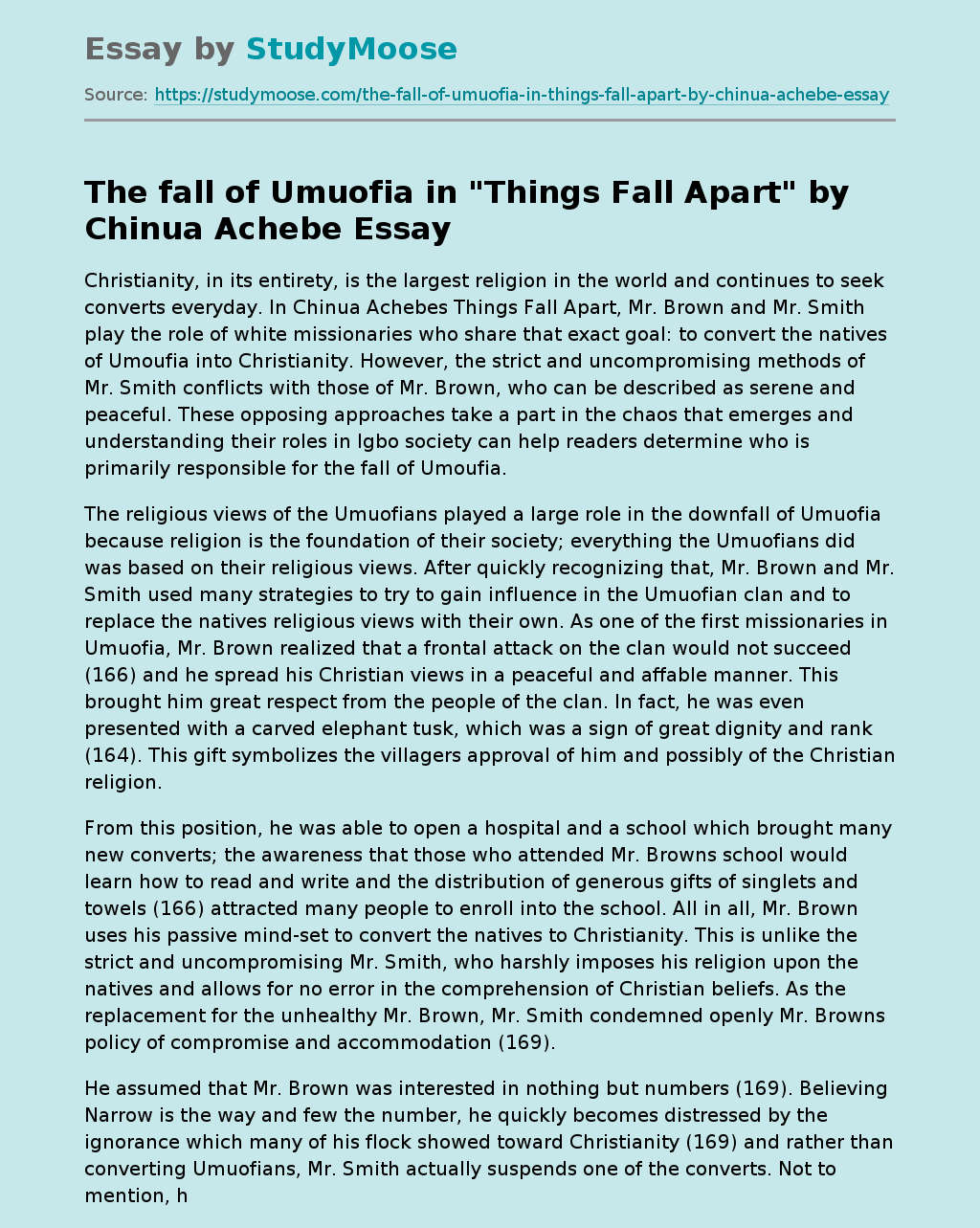