Things Fall Apart was written by Nigerian author Chinua Achebe in the twentieth century. It is seen as the typical modern African novel in English. It was first published in 1958 by William Heinemann Ltd in the UK in 1962. The title of the novel comes from William Butler Yeats’ poem “The Second Coming”. Achebe was born in 1930. Achebe mostly writes his novels in English as Igbo language was hard to understand as this language originated from various types of dialects. This essay will discuss the clash of cultures the Igbo community faces with the coming of the British colonizers and Christian missionaries in the novel Things Fall Apart.

Don't use plagiarized sources. Get your custom essay on
“ Things Fall Apart Clash of culture ”
Get custom paper
NEW! smart matching with writer

Set in pre-colonial Nigeria in the 1890s, Things Fall Apart highlights the clash between colonialism and traditional culture. Achebe’s father was among the first to be converted in Ogidi, around the turn of the century. Achebe himself was an orphan raised by his grandfather. Things Fall Apart deals with how the prospect and reality of change affect various characters.

The tension about whether change should be confidential over tradition in the patriarchal society often involved questions of personal status. Okonkwo, for example, struggles with the new political and religious orders generated by the Europeans because he felt that they are not manly and that he himself will not be manly if he tends to join or tolerate them.

To some extent, Okonkwo’s condemnation of cultural change is also due to his fear of losing social status. His sense of self-worth is dependent upon the traditional standards by which the society judges him.

Another example would be when Okonkwo returns from exile, he does not adapt to the change brought in by the colonizers. In fact his disapproval of western culture leads him to suicide. On one side Okonkwo is being presented as a strong character by attaining his culture, but on the other hand he was a coward leading himself to suicide. So the clash of culture brought tensions in the Igbo society

The villagers in general are also caught between resisting and embracing change and they face the dilemma of trying to determine how best they could adapt to the reality of change. Many of the villagers were excited about the new opportunities and techniques that the missionaries brought. This western influence, however, threatens to quench the need for the change of traditional methods of farming, harvesting, building, and cooking. These traditional methods, where it was once essential for survival, were now to some extent, unnecessary to the Igbo people as the new technologies were invented by the whites which also included education. Throughout the novel, Achebe shows how dependent such traditions are upon storytelling and language and thus how quickly the rejection of the Igbo language for English could lead to the suppression of these traditions. In Things Fall Apart, western culture is portrayed as being “arrogant and ethnocentric”.

Language is also a sign of culture clash in the novel. Language is an important theme in Things Fall Apart on several levels. In indicating the original and often formal language of the Igbo, Achebe emphasizes that Africa was not the silent or confusing island. Rather, by scattering the novel with Igbo words, Achebe shows that the Igbo language is too complex for direct translation into English. Similarly, Igbo culture cannot be understood within the framework of European colonialist values. Achebe also points out that Africa has many different languages: the villagers of Umuofia, for example, make fun of Mr. Brown’s translator because his language is slightly different from their own. To write his novel in English language also depicts that as the culture of Igbo society was washed of by the whites the language also changed.

Hence, this essay has discussed the clash of cultures on Igbo society due to colonization and how the characters were affected by such changes. 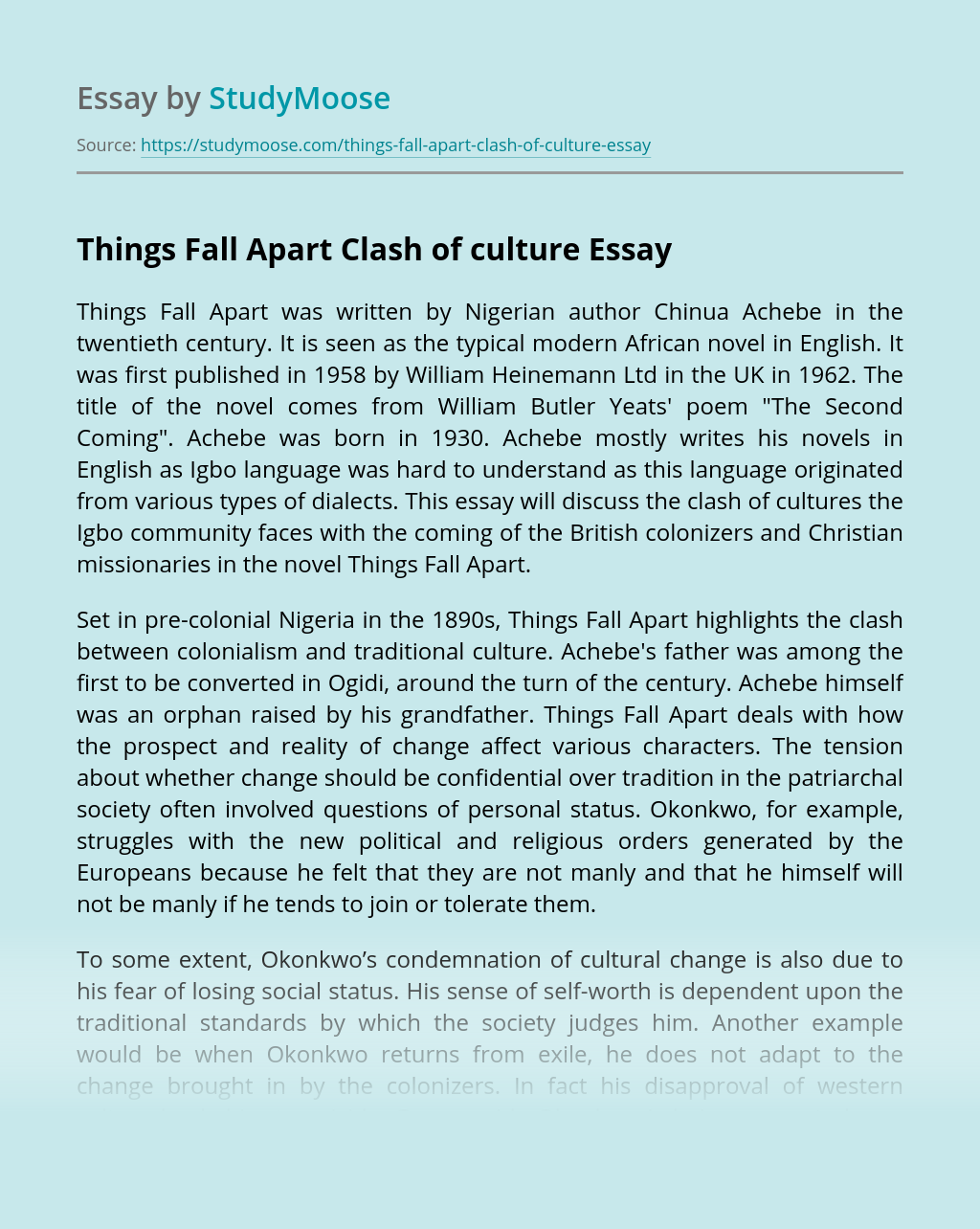