In the novel Things Fall Apart, Chinua Achebe portrays a character, Okonkwo, as a strong and admired leader. Life is great in Umoufia, Nigeria. Until Okonkwo gets exiled from his village for seven years. During that time the European missionaries came and built a church in the Evil forest of Umoufia. This made Okonkwo anxious to come back to his village and restore the Ibo culture but, it was more of a challenge than he thought.

Throughout the novel Okonkwo is a great leader but, he, himself, is challenged by the cultural collision because before the missionaries came in he is the “top dog” of the Ibo people, he is respected and feared and “he had won fame as the greatest wrestler in the nine villages.

”(Achebe, 8). However now that the Western people are in-charge, “They had built a court where the District Commissioner judged cases in ignorance” (Achebe, 174). Okonkwo has lost all that because the Western people take away the fighting games the Ibo people had.

And in the end when he needs his people to help him go against the Westerners, the do not do anything but let him go mad and kill the messenger. Through that Okonkwo is shown to lose the respect he once had over everyone. At this point he has no identity after everything he does to get the Western people to leave his culture alone and go back to their own culture. Achebe uses this to show that when change comes you can either except it and still be admired for your choice or reject the change and risk the chance of losing all that you have.

Many people do not except change and in this novel, Chinua Achebe shows Okonkwo as a perfect example of that. Okonkwo does many things to show his disapproval of the Western people taking over his home place; such as, burning down the church and killing the messenger. Okonkwo tries to explain to his people that “He has put a knife on the things that held us together and we have fallen apart” (Achebe, 176). This metaphor is used to show how the life of Umoufia has changed immensely and to show how easy it was for the strings to be cut and retied but the Westerners.

Okonkwo insists on sticking to the Ibo way of life but a man can only be pushed so far before he reaches his breaking point. Achebe shows Okonkwo’s breaking point when his people do not to support him after he kills the messenger in rage. “Then they came to the tree from which Okonkwo’s body was dangling… ” (Achebe, 208). In the end, his response to the collision of the Western people was suicide. He thought that ending his life would be easier than living through this outrageous cultural conflict any longer. In Things Fall Apart, things do just that.

Chinua Achebe portrays Okonkwo as a very admired and famous leader. When there is a cultural collision with some Western people, his identity is lost because of the respect that is lost from his people. By this time “The Africa of the empires is dying… And Europe too where we are joined by the naval” (Senghor, 182). He then handles this collision with violence and when he has had all he can take, he commits suicide. Achebe has many valuable insights throughout the novel but the one that stands out the most is that even the strongest men have their “breaking points”. 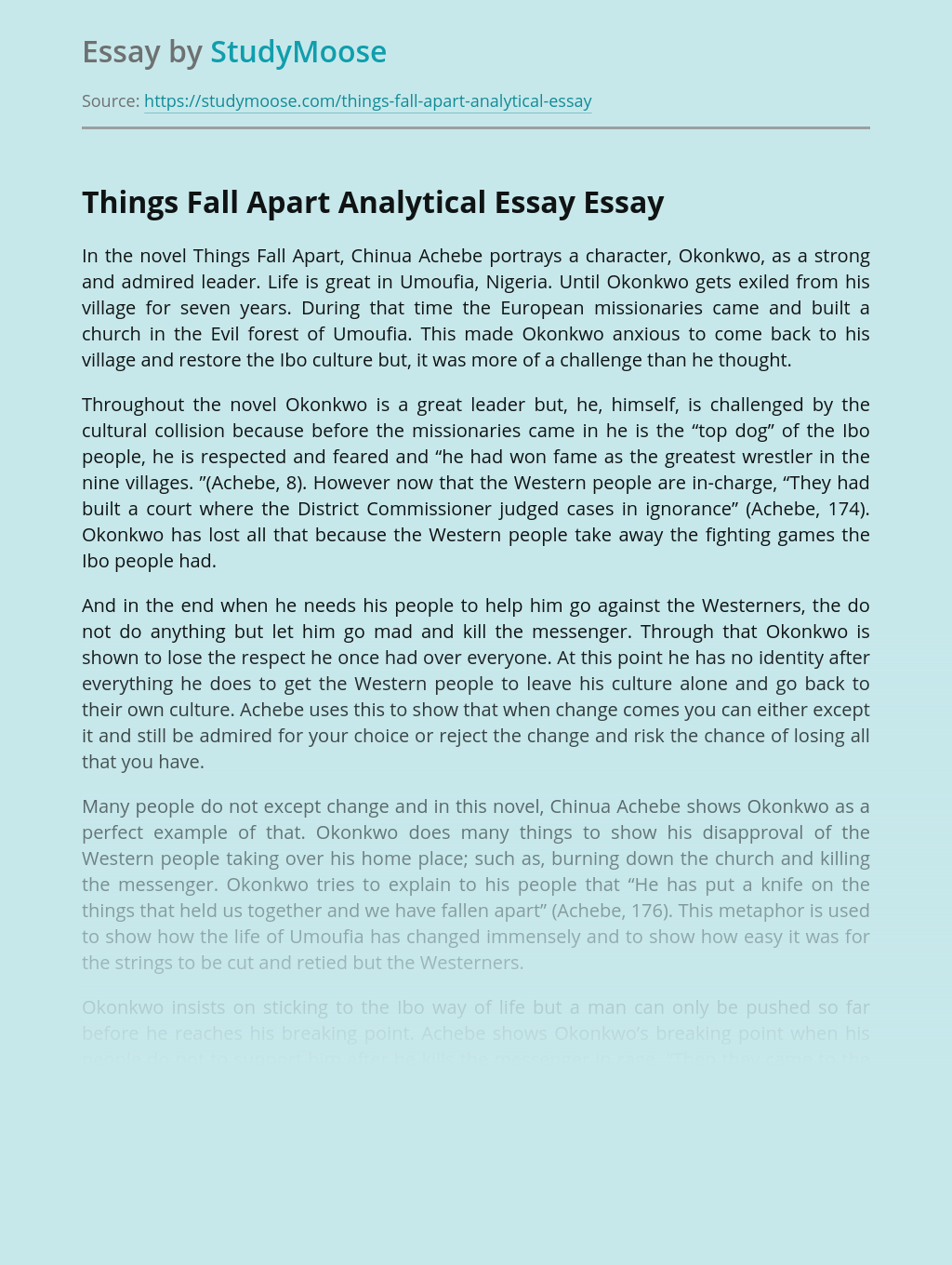