The Ottoman, Safavid, and Mughal Empires

The Ottoman, Safavid, and Mughal societies all relied on bureaucracies that drew inspiration from the steppe traditions of Turkish and Mogol people and from the heritage of Islam, they adopted similar policies, they looked for ways to keep peace in their societies which were made up of different religious and ethnic backgrounds, and they were associated with literary and artistic talents. Military and religious factors gave rise to all three of these empires.

The Ottoman Empire: The Ottoman dynasty, in which, was named for its founder Osman Bey, a leader of a band of semi-nomadic Turks who migrated to northwestern Anatolia in the thirteenth century.

Don't use plagiarized sources. Get your custom essay on
“ The Ottoman, Safavid, and Mughal Empires ”
Get custom paper
NEW! smart matching with writer

Osman and his followers sought to become ghazi warriors who fought for their faith. The Ottoman’s location on the borders of the Byzantine Empire, allowed Osman and his men the opportunity to wage holy war.

The dynasty lasted from 1289 to 1923, but it gained its most power during the sixteenth century, when it expanded its control from the base of Anatolia and spread across most of Europe, Egypt, and North Africa.

He entered Tabriz at the head of an army and claimed the ancient Persian imperial title of shah. ” (Bentley, Streets, & Ziegler, 2008, pg. 460). Ismail Shah reigned from 1501-1524; he also proclaimed that the official religion would be the Twelver Shiism after, Safi al-Din, who was the leader of religious order in northwestern Persia (1252-1334).

Safavids, named after the holy man himself. The Twelver Shiism was said to have twelve prophets and the twelfth one being hidden. Many believed that Ismail was this hidden prophet.

The Sunni Ottomans feared that the Shiite Safavids would spread their beliefs into the Ottoman territory, so they invaded the Safavids in the early sixteenth century. Since the Safavids had Ismail and they thought he was a descendant of Allah himself, they would be invincible in battle. However, with the Ottomans use of gun-powdered weapons and Janissaries, the Safavids were ultimately defeated with the temporary loss of their capital. This was mainly due to the lack of technology and resources, which destroy it.

In the late sixteenth century Shah Abbas the Great, restored the Safavid empire, moved the capital to Isfahan, encouraged trade with other lands and reformed the administrative and military institutions of the empire. He brought most of northwestern Iran, the Caucasus, and Mesopotamia under Safavid rule. (Bentley, Streets, & Ziegler, 2008, pg. 461). The Mughal Empire: Zahir al-Din, also known as Babur, was a Chagatai Turk that, unlike the Ottoman and Safavids, was just a soldier of fortune not fighting on behalf of Islam.

He wanted to use his fortune to transform a glorious central Asian empire. Although, he did not succeed at that goal he then focused on India. Babur took Delhi in 1526. He did not like the land that he had conquered, it was a hot and humid climate but, Babur decided to stay. By the time of his death he had embraced most of the Indian subcontinent. The height of the Mughal power and influence came from Babur’s grandson Akbar. He gained power in Gujarat and Bengal, destroyed the Hindu kingdom of Vijayanagar in order to later expand in southern India.

He was a thoughtful man who tolerated the religious differences in order to keep the peace. Then there was the Aurangzeb who ruled from (1659-1707). Under his rule, by the eighteenth century the Mughals ruled the entire subcontinent except for a small southern tip. He did not believe in religious tolerance and he tried to convert back to Islam. This only hurt his authority causing rebellion and resistance among the Moghal people. The Ottoman and the Safavid were into the foreign trading, whereas, the Mughal ruler had no interest in foreign trade.

The Ottomans were Christians and Jews; the Safavids were Zoroastrian, Jewish, and Christians; and the Mughals were mostly Hindus, with many Muslims, and some Zoroastrian, Jains, Christians, and Sikhism. The Ottoman and Mughal palaces were rather large and extravagant compared to the Safavid palace that was quite small. By the eighteenth century the Safavid Empire was gone completely, and the Ottoman and Mughal empires were severely hurting. At the end of each empire the rulers were incompetent or irresponsible when it came to attending to affair of the state.

They all had so much religious tension because there were so much different religions in each empire that they were moving away from the ways of Islam instead of towards it. Foreign trade was decreasing or the Europeans were gaining control over the trade routes, so this causes economic stresses. The wars caused the empires to exhaust there resources and were not able to replenish them. In turn, they did not want to improve in their military technologies. Technology was passing them by because they were out of the loop. The empires only had limited interests in the world affairs.

The Ottoman, Safavid, and Mughal Empires. (2020, Jun 02). Retrieved from https://studymoose.com/the-ottoman-safavid-and-mughal-empires-new-essay 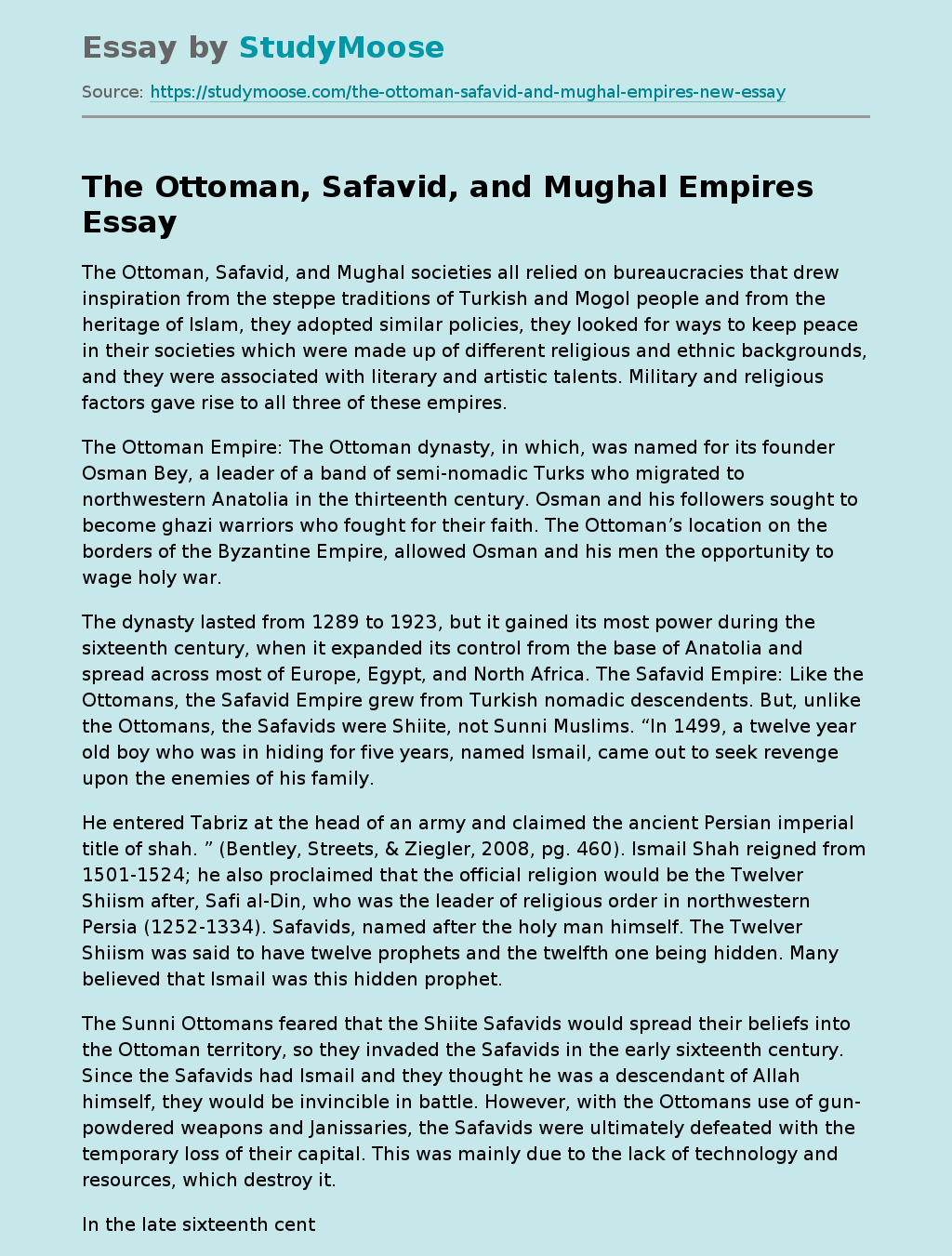