The playwrights Hamlet composed by William Shakespear and Rosencrantz and Guildenstern composed by Tom Stoppard both explore the ideas of appearance versus reality and the puzzling theme of fate and destiny. Both composers employ various techniques related to their specific mediums to convey the misconception that we have control over life. They reflect their composers theme of transformation, which helps to illuminate the difference between deceptive characters and self-deception.

Hamlet was published during the Elizabethan era around 1603 in England. The society of the time was very structured with the head of society being the monarchy and strong evidence of a class system.

Don't use plagiarized sources. Get your custom essay on
“ Tom Stoppard’s “Rosencrantz and Guildenstern are dead” ”
Get custom paper
NEW! smart matching with writer

Rosencrantz and Guildenstern was first published in 1966 and pre formed in The national Theatre in 1967. The play is a contemporary comedy classic, which was influenced greatly by the era in which it was written. The freedom and openness of the sixties enhanced and added a philosophical angle to the play.

The introduction of both texts is different, Hamlet starts on a serious note of his father’s death while Rosencrantz and Guildenstern starts with a rhetorical question about life.

The plays also differ on the language that is used as within Hamlet there is much rhymed verse and formal prose however in Rosencrantz and Guilderstern there is alot of comical interplay between the characters coupled with colloquial language intersecting with Hamlet.

In comparing the two texts both contain the theme of death and the way that it contrasts life. Although both texts contain the same theme it is dealt with differently in both plays.

In Hamlet, Hamlet has an underlying fear of death, although he considers suicide as a release from his pain. His fear comes from the fact that death is unknown to him and that his father is trapped in purgatory for his sins. This belief in purgatory reflects the strong religious beliefs of the time.

However in Rosencrantz an Guildenstern they take a comical look at death using the analogy of life in a box or as a blank eternity “Hey you in there get out, what’s your name?”

In both plays there is a common theme of fate and that fate controls our lives and it is a misconception that we control our own lives.

While in Hamlet, Hamlet believes that he is in control of his life and that there is a god, on the other hand Rosencrantz and Guildenstern believe firmly that there is no god and that fate is in control and will lead us on our predestined path. “Ros do you believe in god? Well, no I can’t say that I do”.

This also reflects the values of the time as in the sixties there was much freedom of ideas and differences were accepting, voicing the idea that god was a misconception in the Elizabethan era would have been unheard of. However with Stoppard writing in the sixties it was an idea that could be freely raised.

The players specialising in “deaths for all occasions” embodies the essentially violent nature of the world, which Stoppard reflects.

The tragedians represent the decadent moral values of the world that Stoppard sees around. They are willing to prostitute themselves literally and figuratively, for a coin. The Player holds the sheer greed of these characters in check as they scramble for a coin thrown down by Rosencrantz. The player points out that “even a single coin has music in it.” The repertoire of Tragedians is full of death and human depravity, a repertoire which the Player candidly points out reflects the interests of their audience.

The Player suggests that this debasement of society has been going on for a long time in the statement ” Don’t clap to loud its a very Old World”.

When looking at Shakespear’s Hamlet in the light of the world that Stoppard describes, we see that despite the amount of death and loss in Hamlet, the characters are very different to R and G.

In Hamlet, Hamlet despite his grief and anguish is still able to exclaim “What a piece of work is a man! How noble in reason, how infinite in faculties in action how like an angel”. Shakespear presents an idealistic and romantic view that directly contrasts the ideas of Stoppard who believes that Hamlet is governed by his own primal urges.

Another contrast is in Hamlet, while the characters are in the throes of treachery and death they retain their sense of nobility. Laertes after saying he is ” justly killed by his own treachery” asks Hamlet to “exchange forgiveness with me, noble Hamlet”.

Hamlet’s reply is similarly brave and generous “Heaven make thee free of it! I follow thee”.

Thus despite the tragic nature of the play, Hamlet possesses many positives, particularly concerning mans finer qualities, which are brought out, albeit tragically, at the end. Therefore as we move to consider the relationship between texts, we see that they propose quite different views of man’s worth, each forcing us to consider whether the other is the more true to reality.

Another theme that that both plays also explore is the idea of freedoms and constraints, this is shown by Stoppard in the way that chaos surrounds R and G and represents a more complex, at least morally and socially, life than in Hamlet’s time. Hamlet lived within a clearly defined moral order, people lived their lives according to clearly defined rules and social hierarchy.

The great historical events of the 20th century had caused great social upheaval, new ways of death and destruction had been invented, it was these uncertainties that affected Stoppard’s work and it is these ideas that he captured and contrasted with Hamlets certainties. Stoppard takes the approach of showing that the characters in his text have no choice and their actions are predetermined such as stated by the player when referring to destiny “It is written” where as Shakespear’s Hamlet’s characters make choices depending on circumstances and probable reactions. Stoppard’s characters are actors. Shakespear’s characters are people.

In Stoppard’s work we are reminded of R and G’s limitations because he intends for us to see them as helpless and innocent. The characters lack of memory, their inability to make decisions that can be acted upon and the symbolism of the boats restrictions are all ways that Stoppard does this. Stoppard wants the responder to see that “Times being what they are”, people are exploited, used and have little control over there lives and actions even through they believe they do and seem to.

These ideas contrast Hamlet in the way they ask the responder to consider how little control we have over our lives and whether or not this has changed from Hamlet’s ordered world. 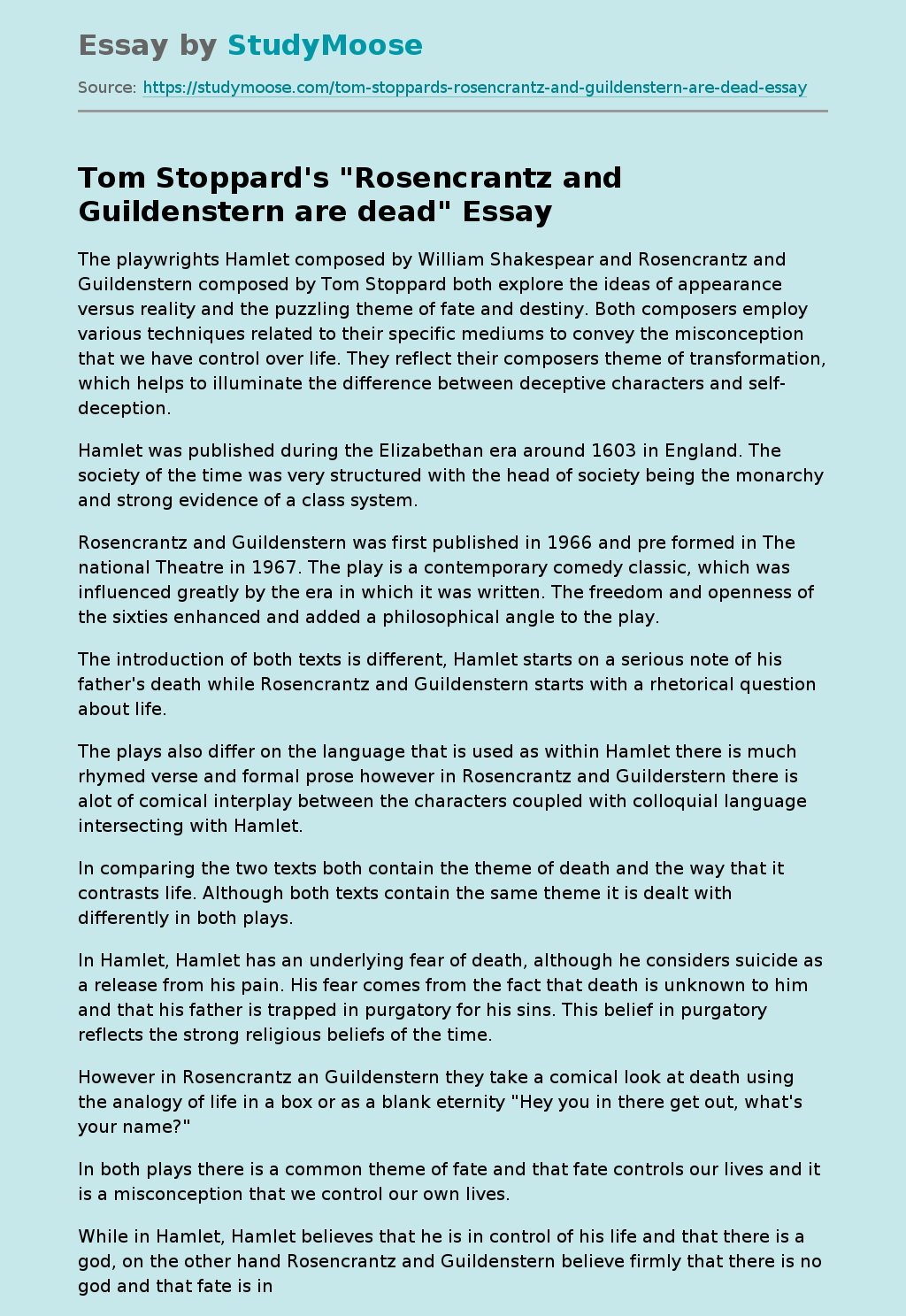