Samuel Beckett’s Waiting for Godot is a mid 20th century play belonging to the genre of the “Theatre of the Absurd”, and focusing on the senselessness of the human condition. The idea of the absurd is a major theme in Waiting for Godot and is embodied in its main characters. Estragon (Gogo) and Vladimir (Didi), taken together, represent the universal man facing the world. Beckett uses each character to show the limitations and absurdity of different aspects of human existence.

Don't use plagiarized sources. Get your custom essay on
“ Samuel Beckett’s Waiting for Godot ”
Get custom paper
NEW! smart matching with writer

The pair of Vladimir and Estragon exemplifies, in the metaphysical level, the dichotomy of man’s nature in body and mind, and illustrates the limitations and senselessness of these parts of human nature.

In Waiting for Godot, Vladimir and Estragon represent the mind/body duality of the human being, a fundamental principle in Western philosophy. Beckett’s intention is to demonstrate through these characters the limitations of the mind and body, taken separately or together, which prevent us from coping with our finite being.

In Waiting for Godot Vladimir represents the mind, while Estragon symbolizes the body. “The pair of Vladimir and Estragon represent a sort of Everyman, by embodying complementary aspects of human nature: Vladimir the intellectual side of man, Estragon the corporeal” (Webb, 27). Throughout the story Beckett presented Vladimir as the intellectual who is concerned with various philosophical and theological problems, while Estargon is more concerned with bodily pleasures and materialistic gains. However these two tramps seem to be imperfect individuals or an imperfect pair in contrast to the Western idea of human existence, which views man as able to achieve perfection through the cooperation of the two aspects of human nature.

Beckett used different symbols to reinforce the sense of the mind/body duality in the Vladimir-Estragon pair. “Their names suggest their personalities “Vladimir”, for example, means “ruler of the world”, a name that suggests the aspiration of intellect to master the universe by reducing it to knowledge, while Estragon, the French word for the herb, tarragon, is a fitting name for a character so earthbound and with such persistent physical appetites” (Webb, 27). The mind/body dichotomy, as it appears in the play, reveals Vladimir as the intellectual who thinks primarily in terms of the past and the future, while Estargon is more concerned with bodily pleasures which link him to the present. In the beginning of Act I Vladimir reflects upon the theological problem of the thieves on the cross and manages to present a valid argument. Estragon, on the other hand, failing to grasp the importance of the problem refuses to think and dismisses the issue by stating: “People are bloody ignorant apes” (Beckett, 7).

Estragon’s answer is highly ironic since it condemns the behavior of people like him. When Vladimir is wrestling with the discrepancies among the four evangelists on the subject of the two thieves, Estragon is only able to recollect the colors and illustrations of the Gospels. Gogo is a “lover of sight” able to know truth as he sees it and attached to the sensible world surrounding him, while Didi is a “lover of wisdom” relating to the intellectual world or the world of the Forms. Moral issues do not interest Estragon, who seeks materialistic gains. Throughout the play he desires food and money: he wants Pozzo’s bones, he thinks he may get money if he waits for him, he hopes to get more bones for picking Pozzo up etc. Estragon’s unconcern towards the discussions and problems of the others is also illustrated by his habit to fall asleep in the middle of a debate.

Vladimir and Estragon’s focus on the divine (intellectual) and the earthly, respectively, can also be seen in a variety of characteristics which they posses. “With some consistency, Didi of Act I speaks as mind, and Gogo as body. Thus, Gogo eats, sleeps, and fears beating while onstage, whereas Didi ponders spiritual salvation. Didi is the more eloquent of the two with Gogo sitting, leaning, limping, falling, i.e. seeking nearness to the ground” (Cohn, 171). Vladimir has trouble with his hat, symbolizing his relation to the sky or divine, while Estragon with his shoes which represent his association to the ground and earth.

Vladimir has a “stinking breath” which is also related to the head and consequently to the mind, whereas Estargon has “stinking feet” which relate him to the ground. Estragon also eats radishes and carrots, which are earthly vegetables, symbolizing his dependence on the earth. It is evident that Vladimir represents the intellectual, while Estragon symbolizes the physical and corporeal. However the two characters do not posses these aspects of human character in excellence or perfection. Instead they are imperfect and are affected by bodily and intellectual limitations.

Beckett uses Vladimir and Estragon to emphasize the limitations of the aspects of human nature which they represent. “In Beckett’s trilogy of French novels, which he subsequently translated into English, a mind is precariously fastened to bodies in succesive stages of decay, and that very decay may originate in Descarte’s statement: that body”¦ is always divisible, and that mind is entirely divisible” (Cohn, 171). The intellectual part of the human being has great flaws since rational thought, which we accept unquestionably, can be subject to skepticism and can seem illogical. Throughout the play Vladimir and Estragon are unable to address simple problems using reason. In Act I they are not able to rationalize what day of the week it is. “But what Saturday? And is it Saturday? Is it not rather Sunday? Or Monday? Or Friday?” (Beckett, 10). It seems that although the two characters try to solve philosophical or theological problems, they never manage to find a rational conclusion and finally give up.

Vladimir is unable to explain why people accept Luke’s account of the two thieves, and finally lets the issue unanswered. Estragon, on the other hand, has to always be reminded about simple things such as who they are waiting for. “What do we do now? / I don’t know/ Let’s go/ We can’t/ Why not? / We’re waiting for Godot” (Beckett, 51). In Act II Estragon has a very faulty memory manifesting the limitations of the intellect, “And Pozzo and Lucky [http://www.youtube.com/watch?v=ksL_7WrhWOc], have you forgotten them too? /Pozzo and Lucky? /He’s forgotten everything!” (Beckett, 67). Beckett is emphasizing the imperfections of the intellect in order to support the Sceptic idea that reason is incapable of knowing the truth. He is accentuating the incompleteness of the human being and the purposeless or inconceivable world we live in.

The second aspect of human nature, the body, is also subject to limitation and deterioration. In keeping with their respective focuses, Estragon suffers from foot trouble while Vladimir complains that his hat causes his head to ache. “Vladimir seems to have gonorrhea, since it makes urination difficult and painful for him” (Webb, 30). The limitations of the corporeal are also reflected in Estragon’s frequent desire to eat and Vladimir’s need to urinate. Another imperfection of the human body is emphasized by the characters’ inability to keep their balance. “End of the embrace. Estragon, no longer supported, almost falls”, “Vladimir pulls up the trousers, looks at the leg lets it go. Estragon almost falls” (Beckett, 74).

The two characters stumble or fall in many occasions during the play. Both Vladimir and Estragon endure physical pain, which is the manifestation of the body’s limitations. Vladimir feels pain when he laughs and urinates, while Estragon endures a constant foot ache. Estragon was also beaten in Act II, reflecting the suffering endured by his body. All these imperfections of the corporeal reinforce the idea that mind and body are subject to limitation and deterioration, and manage to support the sceptic view of human nature and life.

Beckett presents his main characters as body and mind according to “Cartesian dualism”, which views these two aspects of human nature as different substances (Williams, 73). He also emphasized the imperfections and inadequacies of the body and mind which prevent us from finding a purpose in life. “All literary as well as philosophical ramifications of Beckett’s writings appear to stem from this notion of the finite condition of man, who is not so much tragic as he is absurd, even ridiculous, because, in his efforts to overcome the fundamental anguish of his existence, he uses faulty equipment, resulting in a series of paradoxes” (Williams, 75). Beckett is trying to show that the limitations of the human body and mind do not allow the universal man to cope with his finite existence.

When he is searching for rational explanations the inadequacy of his reason prevent him from doing so. And his body, the medium of action, is unreliable and in constant decomposition. Man is trapped in this meaningless being. It seems that he must wait for death which will finally bring an end to his purposeless and absurd existence. Beckett expressed in this play the senselessness of human nature. He exemplified the limitations of the body and mind which leave man helpless and unable to find a meaning or purpose for his being. Vladimir and Estratgon represent the universal man, who is incapable of explaining the philosophical and theological problems affecting his life. As a “rational animal” man is forced to live a contemplating life, but when his mind and body fail to provide him with a valid explanation and meaning for his existence, he can only wait for death which will finally take him out of this continuous and futile cycle of contemplation. 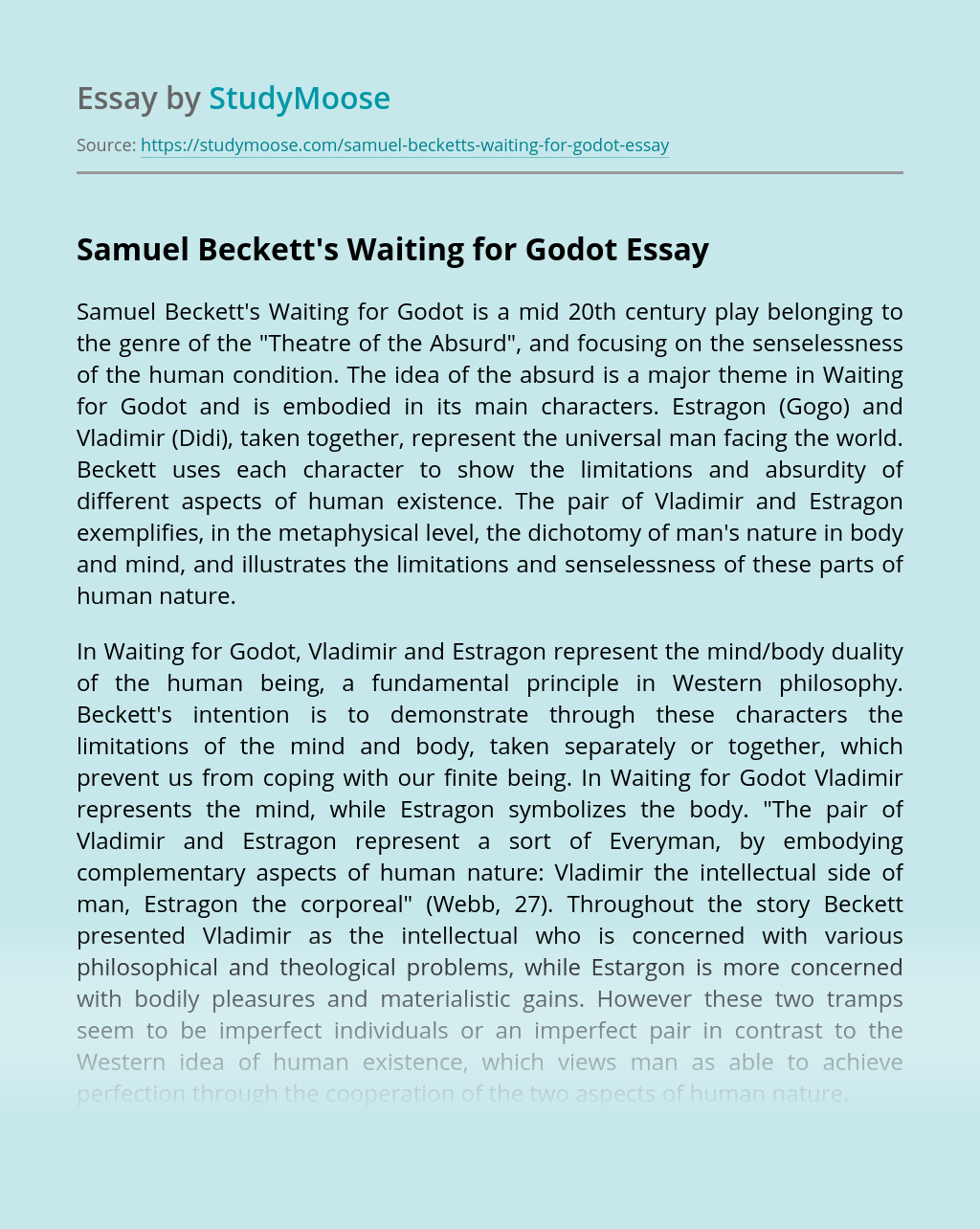