Theatre of the Absurd

Modern age starts from 1900 to 1999AD. The most important events in this age were the world war I & II. As a result of these wars there were a lots of social, political, economic and literary changes in this age. In literature, there is a new terms occurred. Theater of Absurd is one of the literary terms which occurred in that century. The world wars effect on the play writers which make them think of new topic for theater. As a reaction of the second world war theater of absurd comes.

Don't use plagiarized sources. Get your custom essay on
“ Theatre of the Absurd ”
Get custom paper
NEW! smart matching with writer

The word Absurd means having no rational or orderly relationship to human life (online dictionary).

Theatre of the Absurd is a new style of theater based on mixture between dramatic elements and existential philosophy to present the word Absurd (theater of the absurd? ). The term itself was drafted by Martin Esslin in his book which have the same name Theater of Absurd published in 1965. He said in the introduction of his book “The Theatre of the Absurd attacks the comfortable certainties of religious or political orthodoxy.

It aims to shock its audience out of complacency, to bring it face to face with the harsh facts of the human situation as these writers see it.

But the challenge behind this message is anything but one of despair. It is a challenge to accept the human condition as it is, in all its mystery and absurdity, and to bear it with dignity, nobly, responsibly; precisely because there are no easy solutions to the mysteries of existence, because ultimately man is alone in a meaningless world.

The shedding of easy solutions, of comforting illusions, may be painful, but it leaves behind it a sense of freedom and relief. And that is why, in the last resort, the Theatre of the Absurd does not provoke tears of despair but the laughter of liberation” (Martin Esslin quotes) .

Some of the characteristics for theater of absurd that it is in this theater there isn’t conflict , plot, meaning, the ideas are illogical and unconnected, the dialogue isn’t arbitrator. In addition to, the theater of absurd use conventionalize speech and slogans and technical language disorganized sometimes and contradictory in other times. Woman role in this theater is not much important as the man role. also there is no setting or hero. The use of symbols one of the characteristics of this theater.

Samuel Beckett’s play Waiting for Godot is a good example for using symbols in theater of absurd (theater of absurd? ). Samuel Beckett is one of the modern drama writers. He considered as the most famous writer of theater of absurd because of his play Waiting for Godot. Beckett’s plays seem to focus on the themes of the uselessness of human action, and the failure of the human race to communicate. He was born on April 13,1906. In the 1930’s and 40’s Beckett published many works in the form of essays, short stories, poetry, and novels, but very few people noticed his work.

His postwar era fame only came about in the 1950’s when he published three novels and his famous play, Waiting for Godot. Waiting for Godot is probably the most famous absurd play to date. He died in 1989 (theater of the absurd? ). Samuel Beckett took the idea of his play Waiting for Godot from Portrait by the Artist Caspar David Friedrich. In this portrait there is two men standing beside a big tree and keep looking to the moon. So Waiting for Godot is a story for two tramps men Vladimir and Estragon waiting for someone who called Godot.

There is an intermittent dialogue between these two characters while they are waiting and uncompleted sentences. At the end of each act a young boy comes to them with a letter from Godo saying that he will not come today. At the end of the play Vladimir and Estragon decide to not waiting anymore and leave but they didn’t. There is no setting in Waiting for Godot which means there isn’t particular place or time. Also there isn’t any conflict or plot in this play, the characters are waiting without doing anything also there isn’t any important incident which make you have a reaction toward the characters.

The characters speech is conventionalize speech and slogans and technical language disorganized sometimes and contradictory in other times. There is a lot of symbols in this play for example the tree is the only outstanding piece in the stage. Some critics said that is this tree is a symbol for the cross and Godo is a symbol of Jesus. Although there is a lots of plays applied theater of absurd but Waiting for Godot still remains the best. Theater of absurd create a new style in writing plays and play writers with new ideas.

Theatre of the Absurd. (2016, Sep 20). Retrieved from http://studymoose.com/theatre-of-the-absurd-essay 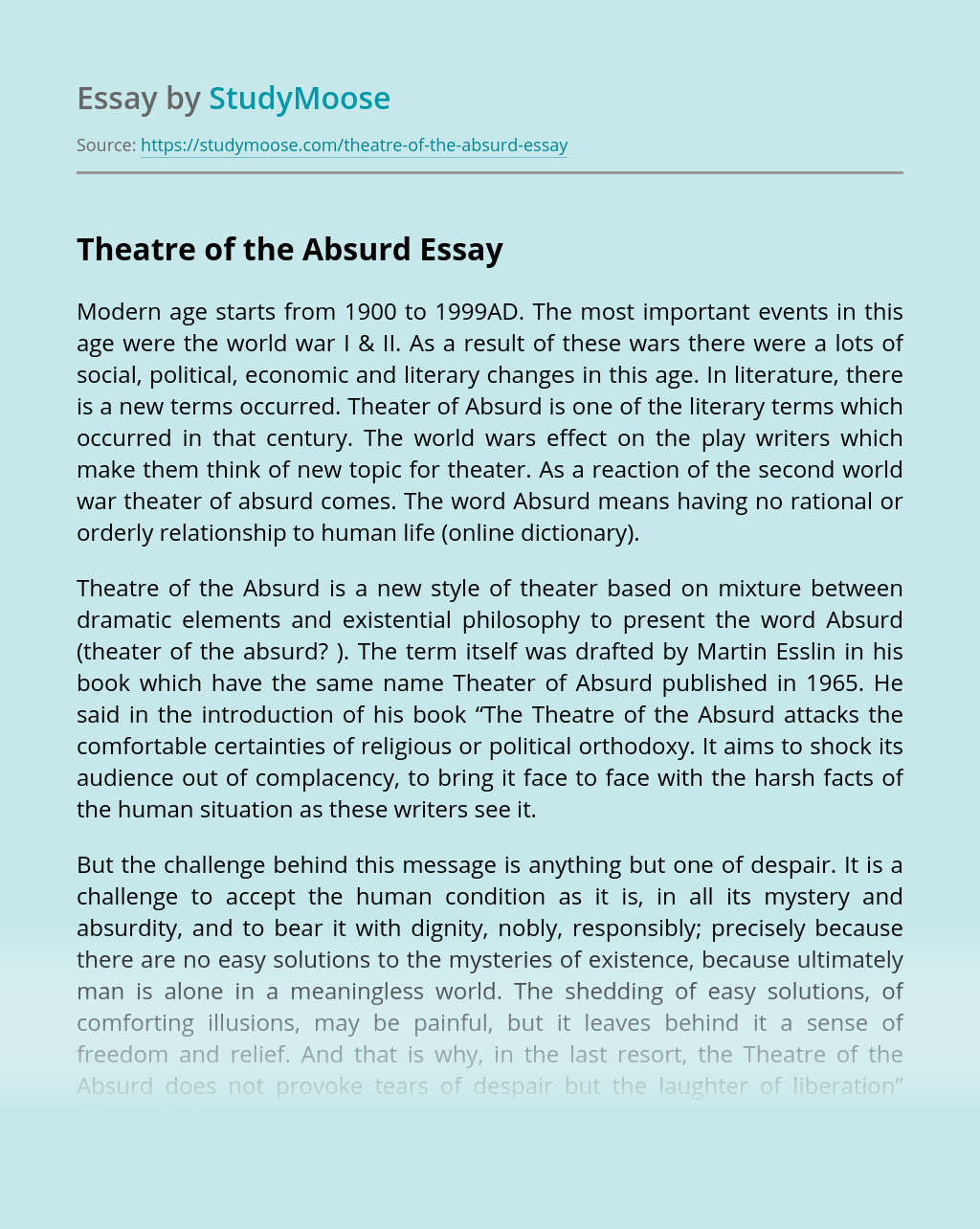