Existentialism in Waiting for Godot

Existentialism is a philosophy that repudiates the idea of religion or any ‘supreme’ being bringing meaning to life, and advocates the idea that individuals are instrumental in finding a purpose to life through free will, choice, and personal responsibility. Hence in Samuel Becket’s existentialist play Waiting For Godot, he puts forth an idea that all of humanity is wasting their lives in inaction- waiting for the salvation of a deity, when that divine being may or may not even exist.

Don't use plagiarized sources. Get your custom essay on
“ Existentialism in Waiting for Godot ”
Get custom paper
NEW! smart matching with writer

As inferred from the phrase “existence precedes essence”, there is no pre-existent spirituality or soul; no god, Christian or otherwise; no cosmic compassion for human life; no salvation in heaven and damnation in hell; neither preset destiny nor inevitable fate; and nor is there the transcendence of our worldly existence. Everyone must bear the responsibility for their own existence, since it is not predetermined or shaped by any external force; a subsequent anxiety is one of the aspects of human nature.

Nevertheless, the burdens of anxiety and responsibility are often too heavy to bear, and we often seek to shift them on certain individuals, institutions, religions, or even on a ‘Godot’. Existentialism manifests itself in Waiting for Godot through its motifs of despair, absurdity, alienation, and boredom. One of the most prevalent themes is that of loneliness as a consequence of godlessness. In a blank futile universe devoid of purpose, design or care – represented by the featureless Beckettian landscape, human beings are alone, and condemned to be free.

Afraid of this isolation Estragon and Vladimir cling together despite their quarrels, and Pozzo and Lucky do not untie themselves.

This futility leads to another characteristic of existentialism: despair. Since there is no preset will, Existentialism preaches the individual freedom of choice. Estragon and Vladimir have made the choice of waiting, without any instruction as Vladimir says that Godot “didn’t say for sure he’d come”. Yet they wait to know exactly how they stand.

The boredom of waiting prompts them to ponder over their identity, as inactivity leads the individual to think. Estragon remarks: “We always find something, eh Didi, to give us the impression that we exist? It is learnt that man needs a rational basis for existence but fails to find one, making his life no better than a wasted passion. The two tramps, Estragon and Vladimir vainly attempt to put order in their lives by waiting for Godot who never arrives, and reiterate that “Nothing is to be done.

” This inaction further questions their very entities, and Estragon anxiously doubts: “Where do we come in? ” Whenever Estragon and Vladimir make a decision, the stage directions dictate that “They do not move. ” and continue to show passivity. Therefore, even their resolution to go is not strong enough to produce action. Many times Estragon says “Let’s go”, but Vladimir always reminds him that they can’t as they are “waiting for Godot. ”This inability to act renders Vladimir and Estragon unable to determine their own fates.

Instead of acting, they can only wait for someone or something to act upon them- referring to the existentialist argument of man’s desperate need to establish his own purpose and meaning to life. Furthermore, Vladimir and Estragon ponder suicide by hanging themselves from the tree, but once again their anxiety stops them, as the latter remarks: “Don’t let’s do anything. It’s safer. ” Kierkegaard’s notion of ‘Dread’ or ‘Angst’ includes ideas of existentialism which talk about a state in which the individual’s freedom of choice places him in a state of anxiety, as he is surrounded by almost infinite possibilities.

This could explain the inactivity of both the tramps. They are aware of the different choices they can make but are hesitant, just as they decide to leave at the end of the act but remain motionless. Thus, the end of act 1 firmly asserts the characters’ hopelessness. Beckett infers that people pass time with habits to cope with the existentialist dilemma of the dread or anxiety of their existence. Estragon and Vladimir idly pass their time to escape the pain of waiting and even thinking.

Vladimir expresses this idea at the end of the play: “Habit is a great deadener. ” All the events narrated through the course of the play – the Crucifixion story, the suicide plan, playing talk – seem nothing more than silly pastimes. Once during the Pozzo-Lucky encounter, the tramps behave as if they are in a theatre; Vladimir even asks Estragon to keep his seat while going off to the urinal at “The end of the corridor, on the left.

” Pozzo and Lucky’s coming can also well be interpreted as an act to entertain Vladimir and Estragon; a way in which Becket questions whether life itself is just a mere source of entertainment to pass the time while waiting for salvation. However, the distractions end sometime or the other, leaving them again with their futile inaction: “The essential doesn’t change. ” This once again echoes the existentialist theory that life will end in nothingness as it has begun, reducing all of man’s achievements and accomplishments to nothing.

Time has little significance in this futile lifecycle. The past often becomes misty to Estragon as he often asks questions like “What did we do yesterday? ” He does not remember Pozzo and Lucky and even the place in Act Two, and shortly, Pozzo fails to recognize the tramps (Estragon and Vladimir) too. The mysterious boy returns with the same message; Godot never comes and tomorrow never seems to arrive. Vladimir, therefore, is right to say that “time has stopped. ” Estragon conveys the horror of this uneventful repetitive existence in “Nothing happens, nobody comes, nobody goes, it’s awful! “.

Existentialism in Waiting for Godot. (2016, Nov 09). Retrieved from https://studymoose.com/existentialism-in-waiting-for-godot-essay 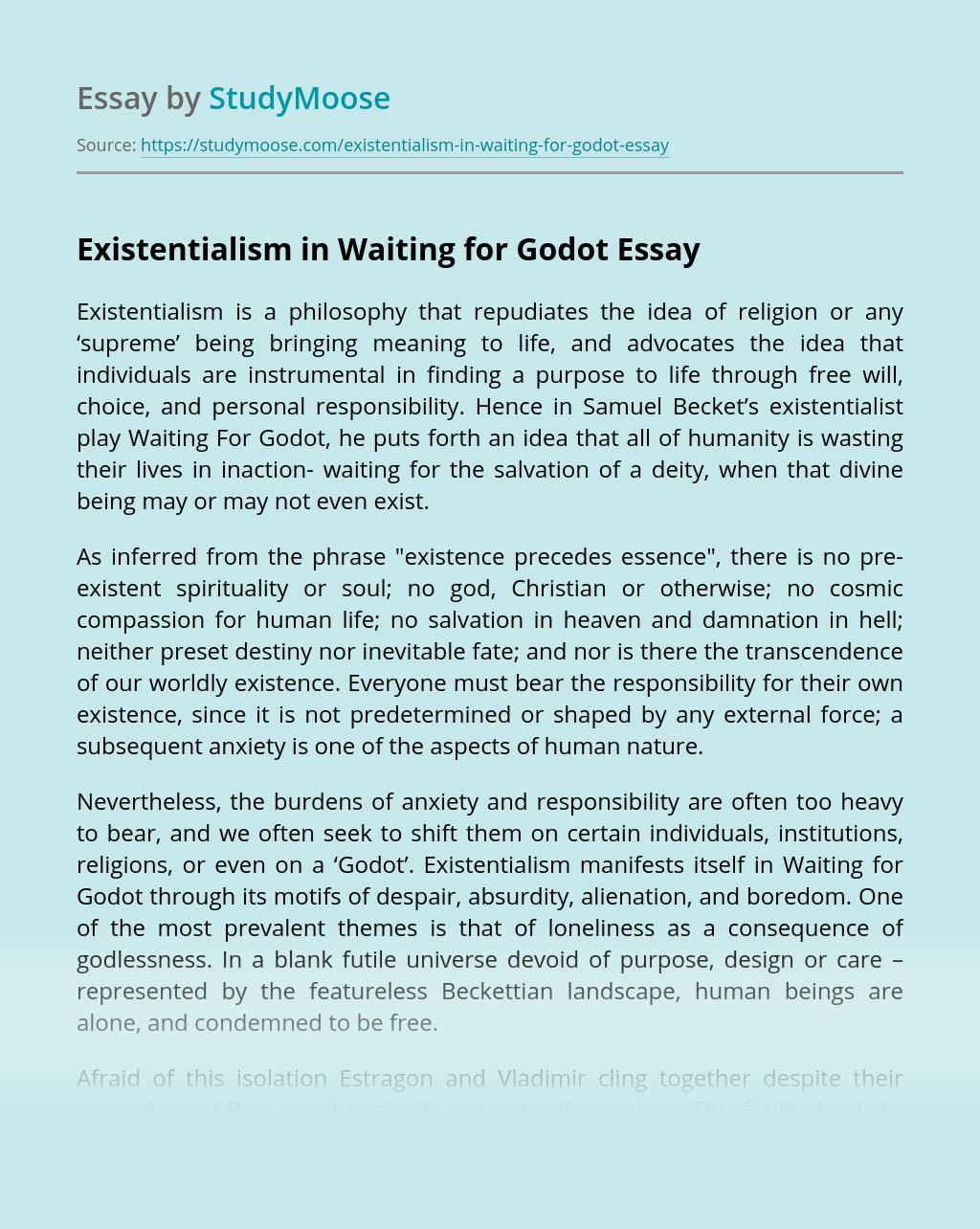