‘Chinese Cinderella’ is the story of pain, rejection and triumph. Mental pain, contempt and cruelty were the harsh realities of her life. But the will to succeed and win recognition proved to be powerful motivating factors. The subtext is based in the years 1940-1950 and on memoirs of Adeline’s childhood. This extract is based on one of the few occasions when she went home. The title has a dreamy fairy tale like tone. It is used in an ironic manner and appropriately chosen.

Don't use plagiarized sources. Get your custom essay on
“ Autobiographical Tone of Chinese Cinderella ”
Get custom paper
NEW! smart matching with writer

This extract has an autobiographical tone as Adeline relates her personal experiences.

The words ‘rejected’, ’despised’, ‘left there’ describe her relationship with her family and reveal the unhappiness of her childhood… like Cinderella. Her love for education helps her to escape to freedom. The 1st person narrative highlights the parent-child attitude and the writer’s character. The writer starts the narrative by creating a very dull, sultry atmosphere with the radio warning of a storm brewing to highlight Adeline’s nervousness about going home permanently from boarding school and the storm brewing in her life.

For Adeline, home was not a place of comfort, security or happiness as for a normal child.

School and studies were her only way to gain recognition. The tragic lack of love and parental concern is evident in Adeline’s reaction to ‘the thought of leaving school’ which disturbed her deeply. The ellipse ‘…’ brings out her anxiety at having to go home. She uses the phrases ‘Time dragged on relentlessly’, ‘eight weeks more’, ‘end of school forever’ and the striking everyday simile ‘throbbed in the back of my mind like a persistent toothache’ to emphasize her fear, her pessimism and dread of leaving school and going home to live.

Loosing steadily’ is used as a pun as she is literally looking in the game of Monopoly and figuratively losing the battle of life with her family. Children in boarding school look forward to visitors and unexpected visits home. To Adeline, these were scary as she was seldom taken home. When her father’s chauffeur came to the school to take her home she was ‘full of foreboding’, ‘as in a nightmare’, ‘wondering who had died’. When she was informed that the family were in good health, instead of feeling happy she was even more worried and negative ‘wondering what she had done wrong’.

This pessimism is due to the lack of a proper loving relationship with her parents and her exclusion from the family circle. The theme of rejection is shown in the dialogue between Adeline and the chauffeur. He does not talk to her respectfully as he should a daughter of the master. He is, in fact, very rude to her. ‘The short drive home’ highlights the fact that her school was in fact not very far from home. Yet she was never taken home. When she arrived home, she did not recognize the house although her parents and siblings had lived there for a few months already.

Even though she had not met them or been home for many months, there was no one waiting to greet her…her step-mother (a socialite) was out playing bridge, her two brothers and little sister were sunbathing by the swimming pool and her father was in his room. All these facts highlight the detachment of her family, the lack of love and caring, her total alienation from the family. ‘See me in his room? ’ – Rhetoric used to express Adeline’s fear, disbelief, surprise. ‘Why? ’ – rhetoric which brings out her fear and doubt shrouded by suspense. ‘Summoned’ is not very fatherly language. The Holy of Holies’.. imagery used to describe a very special place, one to which she had never been invited before. The positioning of the word ‘timidly’ at the beginning of the paragraph highlights her nervousness & subjugation to her father. A listing technique is used to describe her father’s appearance. Adeline’s ‘small sight of relief’ is contrasted with her overwhelming fear. Her cynical and pessimistic attitude has been developed by her past experience of brutal punishment. His ‘happy mood’ made her uneasy. His being ‘so nice’ she thought could be ‘a giant ruse to trick her’. 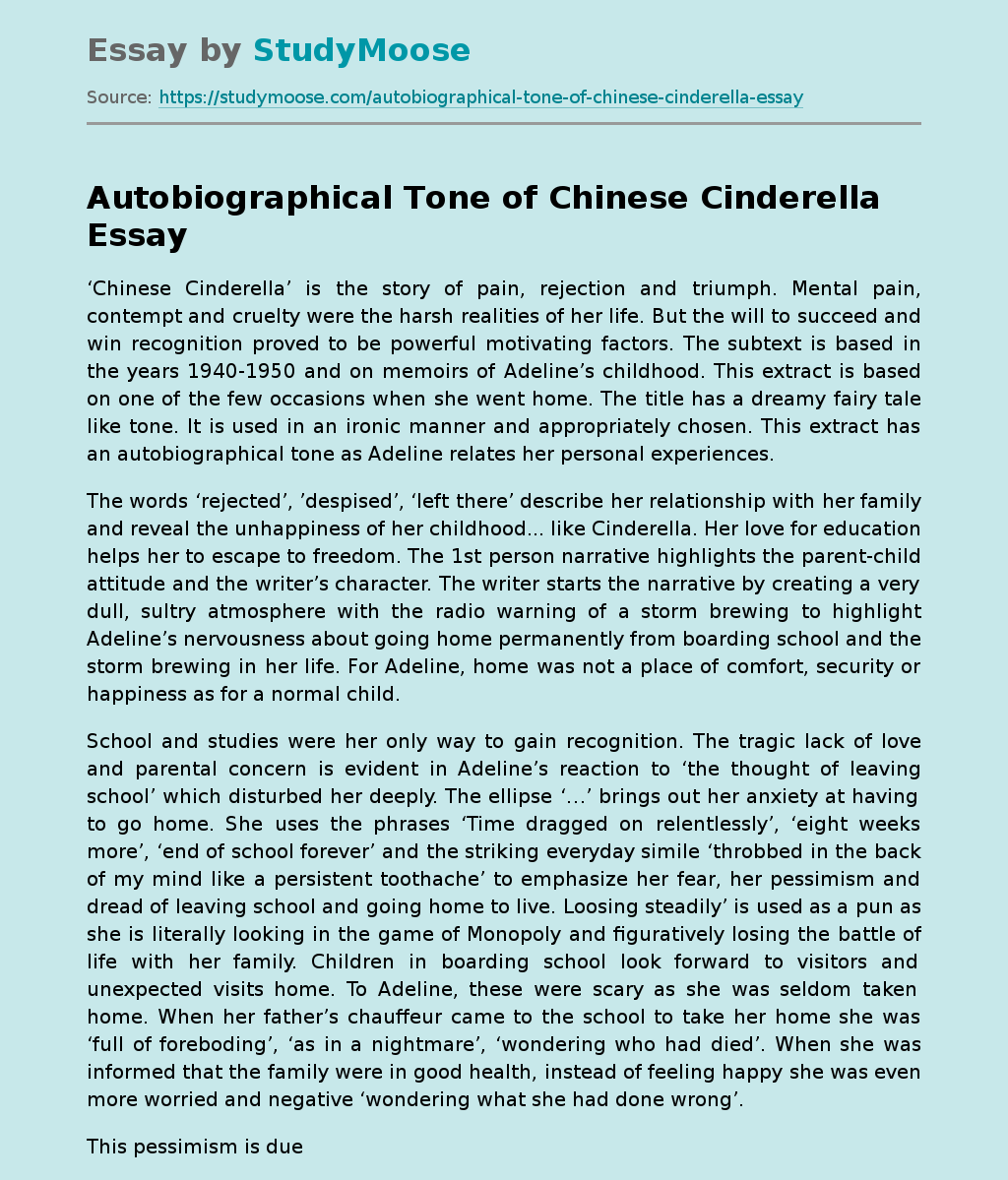