“Legal Alien,” a collection from “Chants,” is a short free versed poem written by Pat Mora. The poem explores the lives of Mexican-Americans and the cultural tension they have to face. The poet discusses a bi-cultural person whose parents are from Mexico but the person was born and raised in America and is an American citizen by law. Although he can speak fluent English and Spanish, he still has a hard time being accepted by both or one race. Mora’s use of poetic techniques such as metaphor, tone and antithesis emphasizes her concerns in regards to the issue.

Turn in your highest-quality paper
Get a qualified writer to help you with
“ Metaphor, Tone and Antithesis in “Legal Alien” ”
Get high-quality paper
NEW! AI matching with writer

Mora uses metaphor to highlight how a bi-cultural individual feels like not being acknowledged by both races.

“a handy token” (line 16) informs the readers that a bi-cultural individual is like a handy instrument that can easily slide from back to forth, from English to Spanish (vice-versa). The person can also adapt very quickly, quicker than those who has only one culture. “between the fringes of both worlds” (line 18) notify the readers that although the speaker’s race is Mexican and his nationality is American the speaker isn’t fully accepted by both races. Mexicans view the speaker as an alien (line 10) while American view him as exotic, inferior and definitely different (lines 9-10). In this situation, the speaker feels lost in both races thus having an identity crisis.

Using tone shapes the ideas of the poem and expresses the poet’s aggravation towards cultural tension. “able to slip from, “How’s life?” to “_Me’stanvolviendo loca”_

(lines 2-3) this line informs the readers that while the speaker can speak both languages fluently she isn’t accepted by both races entirely and the speaker is frustrated, this is evident when she said “_Me’stanvolviendo loca”_(line 3) this means ” they are driving me crazy” in English.

“By smiling by masking the discomfort of being pre-judged Bi-laterally” (lines 19-22) the speaker is unease and sad because she is not accepted by both races. The speaker smiles to conceal his discomfort of being pre-judged immediately without knowing him first. Mora capitalizes “Bi-laterally” (line 22) and adds a hyphen to draw attention to the readers that the speaker is being judged by both of his heritage.

Mora uses antithesis to make the readers more mindful of the opposition. Antitheses is almost visible in every line of the poem where the speaker is describing two different races, Mexican and American, side-by-side with each other but are complete opposites. Examples are “How’s life? To _Me’stanvolviendo loca”_ (lines 2-3), “Drafting memos in smooth English, able to order in fluent Spanish at a Mexican restaurant” (lines 5-7), “Viewed by Anglos as perhaps exotic, perhaps inferior, definitely different, viewed by Mexicans as alien” (lines 9-11), “An American to Mexicans/ A Mexican to Americans” (lines 14- 15). These lines of antithesis draw attention to the cultural tension between Mexican and American in an individual’s knowledge.

Pat Mora uses poetic techniques such as metaphor, tone and antithesis to show discomfort and frustration of fitting in and being accepted by both races. The readers is predicted to fathom that bi-cultural individuals don’t have it so easy fitting in and being accepted by both races even though they can speak both languages, both of their race still don’t accept them utterly. That leaves them having an identity crisis thus being called a “legal alien”, a person who belongs however is not entirely acknowledged by the community. 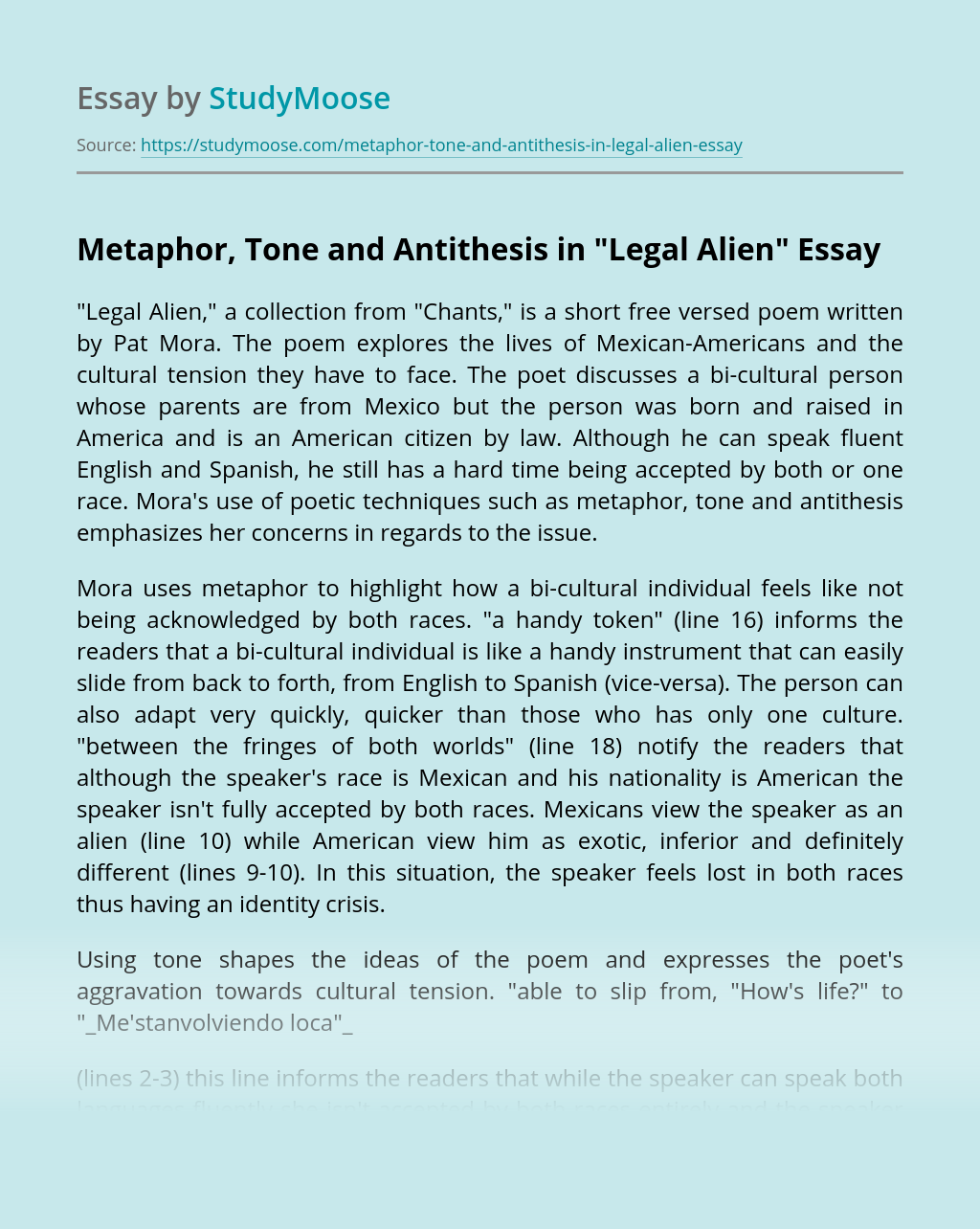 Turn in your highest-quality paper
Get a qualified writer to help you with
“ Metaphor, Tone and Antithesis in “Legal Alien” ”
Get high-quality paper
Helping students since 2015
Stay Safe, Stay Original