Practical Criticism on the Tamer and Hawk poem

Tom Gunn’s Tamer and Hawk is an extended metaphor depicting a powerful, strong, almighty, wild bird of prey (a metaphor for Gunn) being controlled by a seemingly inferior body (a human) – his true love. It depicts an image of a bird and its master (with the use of indirect personification). It tells a story of Gunn’s adoration of his ‘Tamer’ and his strong desire to entice his love. It is an effective metaphor because as the poem continues the danger and violence becomes more prominent, especially at the end of the poem.

Don't use plagiarized sources. Get your custom essay on
“ Practical Criticism on the Tamer and Hawk poem ”
Get custom paper
NEW! smart matching with writer

There are three main theme to the poem; love (“To fly for you and show”), loyalty (“For you I fear to lose”) and devotion (“You seeled me with your love”). The first stanza explains how the Hawk is happy to be domesticated by this person, as he expresses no objection to his situation. He even wants to show off his capabilities in a performance to his Tamer in the hope of impressing him.

Gunn idolises his Tamer by portraying him as kind (“But gentled at your hands”) and being gently powerful (“I thought I was so tough”) – with the emphases on the second ‘I’ trying to show the Tamer is more powerful than himself, as well as the quotation “Upon your wrist” which depicts the Tamer as somewhat of a godly figure who is in control of another life.

Also, the quick rhyme scheme: A, B, A, C, C, B, along with the lack of any punctuation and the fast rhythm of the stanza (without any assonance or alliteration or sibilance), due to the Iambic trimeter, emphasises the Hawk’s effort he is putting into his performance, and hence trying to impress his Tamer.

This is cemented by Gunn’s use of the phrase “Cannot be quick enough” which implies that his pace is still not enough to please his lover. The second stanza could be seen as a continuation of the first stanza, the themes are interrelating and also the ideas are common. It evinces the Hawk still not being able to fly away, as he is too in love with his Tamer that whenever they are apart, as soon as he calls him back he returns as fast as he can. It is evidence of how he is becoming so subservient to his Tamer (“I am no longer free”). Additionally, this quotation implies that the Hawk is in the process of being tamed, which means that there are still some wild aspects of his nature. This links to the quotation “You but half-civilise” which leads to hazardous consequences.

One also gets the sense that the Hawk has some desires to be released – showing his wild core aspects, by the use of regular polysyllabic words, with possible double meanings – “no longer free,” “seeled,” “blind,” “hooded.” The fact that the majority of these words are polysyllabic could be intended to extend the length of the word in order to express his pain, suffering and anguish. Stanza three explains how the Hawk has now broken free and has the opportunity to open his wings and explore, however, there is one major drawback. He cannot release the thought of his love, the Tamer, which is constantly on his mind (“In my possessive thought, Of catcher and of caught”). Additionally, in the first line of this stanza the word “formerly” links back with the idea that he is putting on his best show in order to try and impress his love, continuing the themes of devotion, loyalty and love, and also determination and fortitude. Despite the clues embedded within the poem, it is the final stanza that is the climax of the poem. There are several integral parts to the poem in this stanza.

The general picture of the stanza is that the Hawk is willing to go to the very extremes if it means not losing his love. The phrase “half-civilised” proves that the Hawk still contains his wild instincts and nature, as he is still half wild, however, this is no excuse for what the Hawk plans to do to his Tamer – Kill him. “For you I fear to lose, I lose to keep, and choose Tamer as prey” explains the Hawk’s plan. It may not be very evident but it does illustrate what the Hawk is willing to do, in order for him not to lose his Tamer. The Hawk obviously longs for the Tamer, however, he might long for him slightly too much because it could be on a parallel with how much a Hawk longs for its prey. One could form the opinion that what the Hawk is a metaphor for is monomaniacal as he is willing to kill his love in order to keep it. “I lose to keep” is a paradox because the two words in juxtaposition are opposites, contradicting each other, creating an antithesis.

It is incomprehensible that one must lose something in order to keep and preserve it. This is the most extreme example of devotion. Generally, the fact that all of the stanzas end in an abrupt fashion, with a four syllable line instead of the previous six syllables, could be interpreted, by the reader, as the Hawk’s realisation that his Tamer is not returning his love and reveals the Hawk’s desperation and disappointment when he is rejected his ultimate wish. The extended metaphor is a very good and effective one because it gives very clear images of all of the scenes created by Gunn and also it is appropriate because the relationship is so domineering, possessive and un-natural.

Practical Criticism on the Tamer and Hawk poem. (2016, May 24). Retrieved from https://studymoose.com/practical-criticism-on-the-tamer-and-hawk-poem-essay 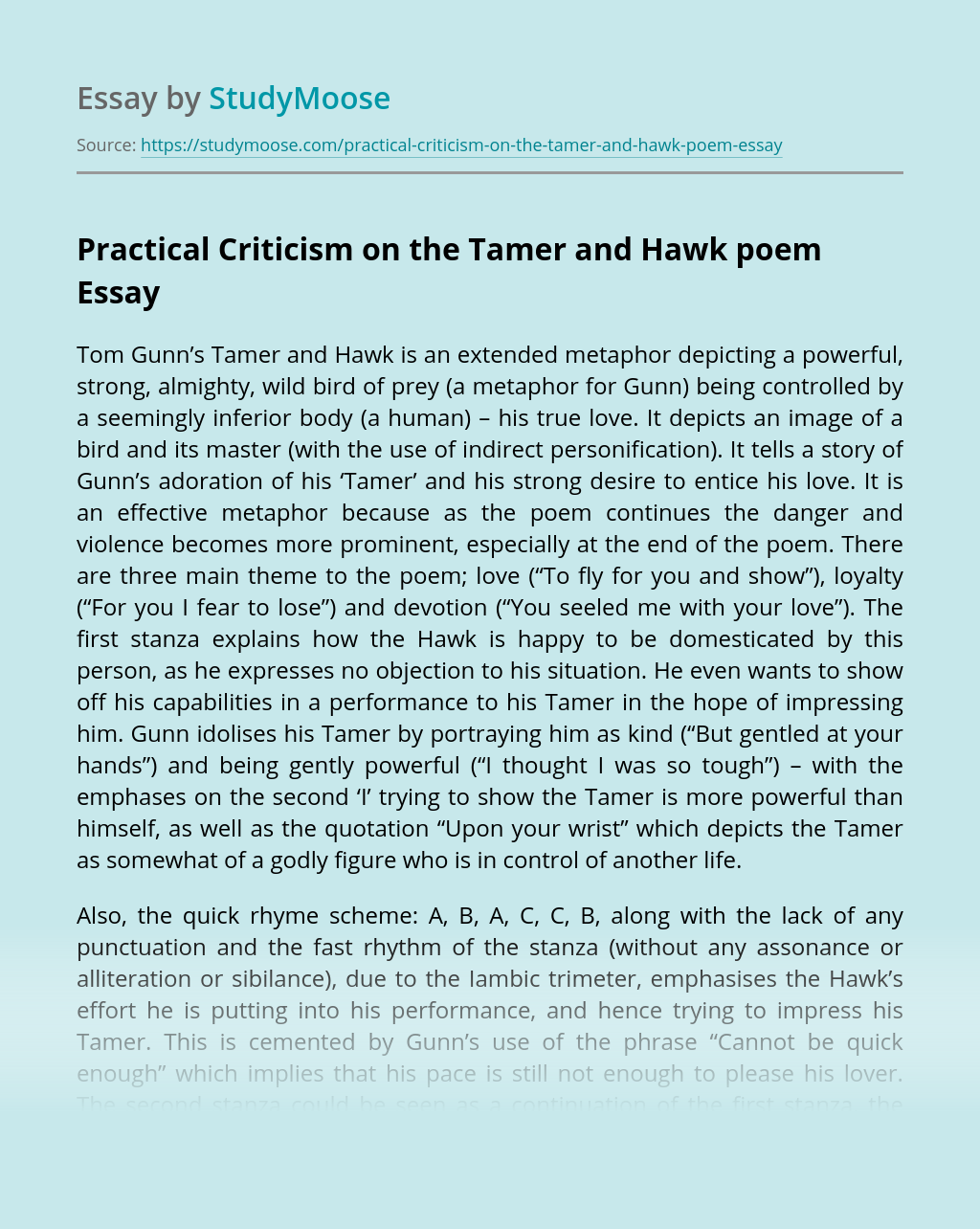