In the two poems Ted Hughes’s, “Hawk Roosting,” and Mark Doty’s, “Golden Retrievals”, the writers use tone and visual imagery to present the animals’ unique point of view in the poems. The tone of “Hawk Roosting” is powerful, sinister, and arrogant compared to the lighthearted, playful tone that is set in “Golden Retrievals.” The hawk’s monologue in “Hawk Roosting” shows how the Hawk sees the world with such power and a sense of ownership as he tells the reader that he “kills where he pleases because it is all his” (line 14), in difference the k-9 in “Golden Retrievals” who sees it in a playful and distracted manner.

Don't use plagiarized sources. Get your custom essay on
“ Analysis of Poems Hawk Roosting and Golden Retrievals ”
Get custom paper
NEW! smart matching with writer

The egoistic narrator in “Hawk Roosting” is a hawk that uses imagery make the reader envision the world from his eyes. The reader can imagine the narrator’s “each feather/ hooked head and/ feet locked upon the rough bark”. The wording seen during the course of the poem “Hawk roosting” creates an image for the role that the Hawk thinks he plays in the world.

The Hawk views the world from “the top of the wood” and as the Hawk is able to fly he “the earth’s face [is] upward for [his] inspection” showing his excellent view of his surroundings and how he views the world as his own.

In “Golden Retrievals” the distracted narrator paints a picture in the reader’s mind of how many objects he encounters and allows the reader to imagine the dog constantly chasing after a new object on a daily basis.

He “sniff[s] the wind, then/ [is] off again” while the owner is “sunk in the past, half [their] walk,/ thinking of what [the owner] never can bring back”. In contrast to the Hawk, the Golden retriever is much more of a carefree character. The wording used in this poem is much more energetic than the diction seen in “Hawk Roosting.” The narrator speaks of things that remind the reader of dogs and their nature such as “Fetch, Balls and sticks, [Bunnies], a squirrel”.

Hughes uses a dark tone to portray the hawk as a very powerful, wild, and sinister animal. The Hawk states, “There is no sophistry in my body: My manners are tearing all heads-” showing how he views himself as a ruthless king of the earth and the “whole of Creation”. In opposition to Hughes, Doty uses a more playful and distracted tone to depict a character who is concerned with fetching and is easily distracted because “Balls and sticks capture [his] attention/seconds at a time”. The Dog views himself as a friend to its owner, and although the Dog is distracted with running, chasing squirrels, and fetching, the Dog also is aware of its owner Doty uses the playful thoughts of a dog while Hughes contrasts with the stark thoughts of a commanding hawk. These opposing characterizations help the narrators convey very different animalistic perspectives of the world. While the Hawk views the world with ownership, the Dog is easily distracted by passing objects and enjoys the little things in life. 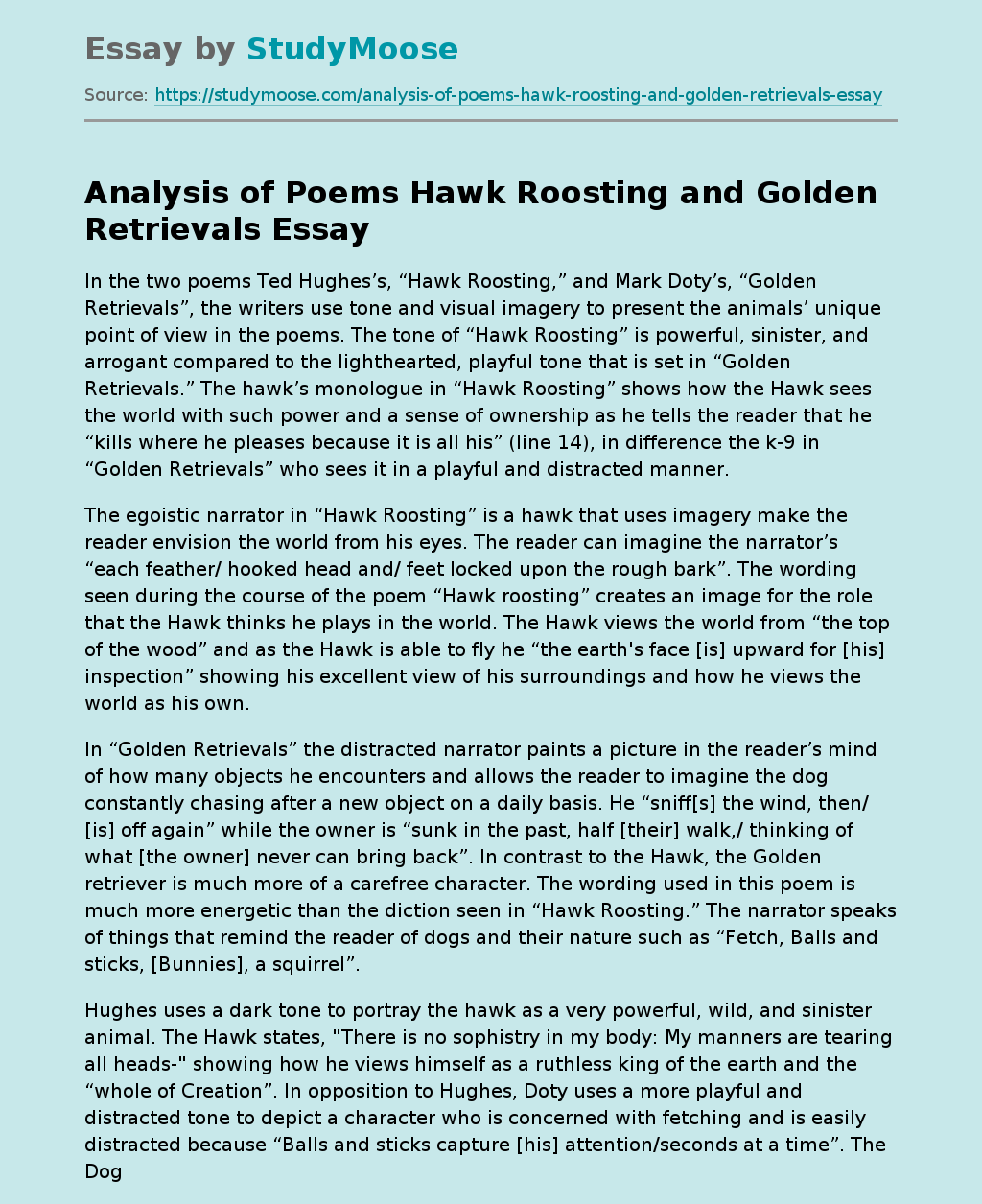